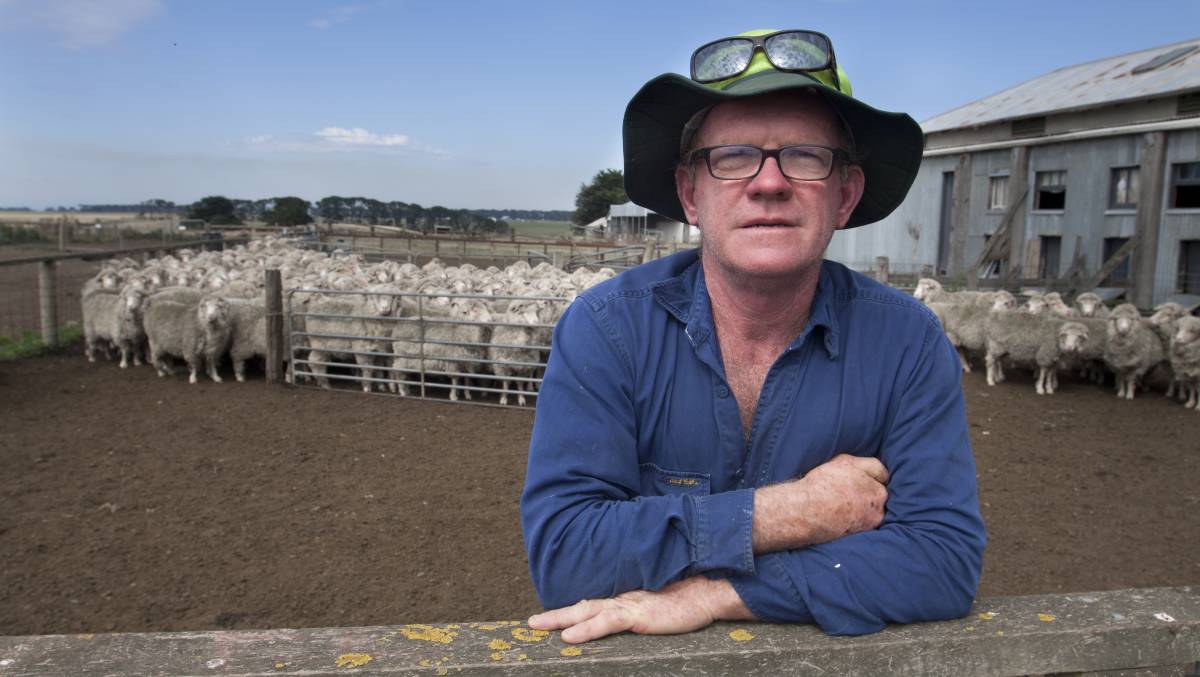 Two south-west woolgrowers have called for more action by the wool industry to stop mulesing.

Winslow merino producer Brendan Finnigan reckons the wool industry has to eventually end the practice of of mulesing sheep to prevent flystrike.

Mr Finnigan, who runs about 8000 merinos north of Warrnambool, said calls to end mulesing had to be heeded by the industry “because it is consumer-driven.

“If you do not satisfy your consumers, you are in trouble,” Mr Finnigan said.

He said wool was a luxury fibre and those buying it were discriminating consumers whose decisions on what apparel they bought were not based solely on price.

“We have to be ahead of the market. We have to resolve it because the (mulesing) issue could financially damage us,” he said.

Mr Wilcox told the recent Best Wool/Best Lambs conference in Bendigo last month that Chinese mills knew nothing about the pain relief that Australian producers administered to mulesed sheep and wanted wool from sheep that had not been subjected to the procedure.

In 2009, Australian Wool International (AWI) backed away from an earlier undertaking to end mulesing by 2010, saying the industry would phase out the practice in its own time and would not be beholden to the demands of animal rights groups.

However only 10 per cent of the national clip is currently declared as non-mulesed and only 28 per cent of the clip is identified as wool from sheep that received pain relief during surgery.

Mr Finnigan said he gave his lambs dag and breech ratings before they were marked and later culled out those that had high ratings to reduce the need for mulesing.

The aim was to breed sheep with a bare posterior and less wrinkles in the posterior region so they had less dags, less incidence of flystrike and less need for mulesing, he said,

But creating a flock that had little flystrike risk was “not something you do overnight,” Mr Finnigan said.

Another south-west merino breeder, David Rowbottom, of St Helens near Port Fairy, said he had not mulesed since 1979 but received no price premium for not doing so.

Mr Rowbottom said he could be forgiven for thinking the price he received from his most recent wool sale had been discounted because it was from non-mulesed sheep.

“If they want people to stop mulesing, they need to increase competition for non-mulesed sheep,” he said.

Mr Rowbottom said he had overcome flystrike in his merinos by breeding sheep that did not have posterior wrinkles.

Mr Wilcox’s comments about the increased demand for non-mulesed wool have so far been met with a deafening silence from some wool industry bodies.

Australian Wool Innovation formally declined to respond to Mr Wilcox’s comments and the Sheepmeat Council of Australia (SCA) did not respond to requests for comments.

Meat and Livestock Australia  managing director Richard Norton told the Bendigo conference at which Mr Wilcox spoke that he believed the sheep industry was “exposed” to attack about mulesing.

He said an “antagonist” employed by the MLA and SCA had identified mulesing as a crisis facing the sheep industry.

However the MLA did not respond to a request for further comment.

Australian Wool Growers Australia director Robert Ingram, who runs sheep on the Victorian/NSW border, said it was satisfied with the approach taken by AWI on the issue.

AWI’s short-term goals on mulesing are to replace traditional mulesing, which is performed without pain relief, with surgery that involves pain relief and non-surgical methods of removing breech wrinkle such as intradermals.

AWI’s long-term goal is to remove the need for mulesing by encouraging advances in non-invasive management practices such as crutching, jetting, accelerated shearing, short joining and lambing, worm control and nutrition.

It also wants to encourage genetic research and enhanced breeding for flystrike resistance in wool sheep.