Fence us in! That was the response from 22 landholders in the western division, some of whom have contributed over $100,000 each to the biggest cluster exclusion fence in NSW.

The size of the fence is mammoth. It covers 210km, fencing in 177,000 hectares. The farmers reckon they need the fence to save their crops and pastures from feral pests.

Out at Gilgunnia, crops would go down as soon as they grew, with wild pigs ravaging what was already often challenging cropping country.

Everything is big out Gilgunnia way - the properties, the distance to town and the problems of feral animals.

The push for the exclusion fence started as almost a  giveaway line at a Christmas get together at Glenn Turner’s “Penshurst” property two years ago, with his neighbours agreeing they were sick of feral animals. They felt a wild dog problem wasn’t far away. They’d seen how exclusion  fences were operating so well in Queensland and thought “why not here?”.

The Local Land Services was approached to support the project and eventually over $600,000 was poured in from the Federal Government’s 2016 Pest and Weed Drought Funding Program.

The hard yards started when trying to get all farmers to join the cluster. “Just try and get 22 farmers to try and agree on one thing,” remarks Glenn Turner. Some didn’t want anything to do with it and opted out. Eventually a rate of $1.30 (plus GST) an acre was worked out among the project participants to cover all costs of the Waratah fence on top of the government grant.

Bob Wynne, “Black Range”, 15,378ha, says putting up the fence was a no-brainer. “We don’t have wild dogs yet, but we wanted to be prepared for when they come.  Basically we are keeping out the roos, goats and pigs.”

Mr Wynne has poured in $125,000 all up to fund the fence on his property. The fence is almost six-foot high with a bottom apron and barbed wire at the top. He fenced alongside his existing boundary fence. The fence went up quickly despite some delays due  to shipping issues. Parts of the fence hit the central division boundary. 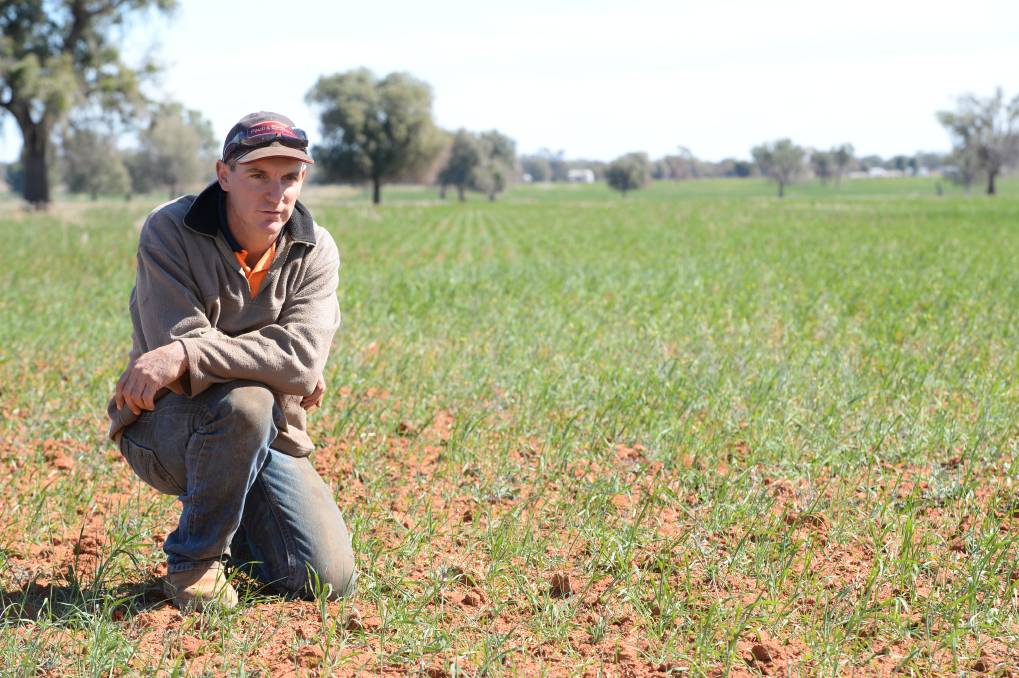 Getting 22 farmers to agree on one thing was pretty hard, but now the Gilgunnia exclusion cluster fence is a reality.

It was all hands to the wheel, with one neighbour donating a grader to clear the fence line and an Aboriginal work for the dole group helping erect the fence on “Penshurst”.

An open day will be held at “Penshurst” on Monday, September 18, to showcase the exclusion cluster fence, now the biggest in NSW. A smaller cluster fence at Guyra, the Wongwibinda cluster fence project, covered more than 9000 hectares. Farmers saw a return of $1.49 a hectare in the first year.

The 210km Waratah exclusion fence has a wide skirt to stop feral animal entry. Already a group of about 300 pigs was found excluded at one part of the fence.

Landholder Dave Worsnop of “Yarambie” and Glenn Turner noticed the benefits straight away.

“In the 21 years I have been here it is the best improvement we have made, the positive impact it is having was pretty much noticeable straight away,” Mr Worsnop said.

“I’d done a bit before and when the project came along I was more than happy to be involved.”

Mr Turner said: “We pretty much noticed the benefits straight away and we are looking forward to having more control over our pest animals and grazing pressure. We are going to do more between my property and Dave’s off our own bat.

“Hopefully within five years we will have our entire property fenced with cluster fencing and Dave is doing the same and thinks he will be done within a year and a half.”

The LLS said in a media statement that an Aboriginal youth working group working on Penshurst should be commended for their efforts. Michael Mitchell, who was mentoring the workers, was really pleased with their attitude and the application they showed to the project.

“It has been great for them and they have really applied themselves to the work,” Mr Mitchell said.

“Just getting out of town and out here to work has been great, it is teaching them not only the farming skills but also life skills like getting to work on time, cooking their meals at night and helping and supporting each other.”

The LLS in Dubbo said any landholders that are interested in finding our more about cluster fencing should contact Senior Land Services Officer – Native Vegetation, Brian Dohnt on (02) 6836 1575