Angus bulls sold to a top price of $21,000 and averaged $9736 a head at the Karoo on-property bull sale near Bathurst on Friday.

ANGUS bulls sold to a top price of $21,000 and averaged $9736 a head at the Karoo on-property bull sale near Bathurst on Friday.

A total of 78 bulls were offered and all were sold by John Reen and Tony, Annie and Riley Scott.

Mr Evans said he was attracted to the bull because of its low birth weight estimated breeding values.

“We intend to AI (artificially inseminate) our heifers with this bull,” he said.

“It’s not something we have done before, so it will be interesting to see how it goes.”

Stephen Peake, “Bowen”, Barraba, shelled out $20,000 for a Sydgen Black Pearl son early in the sale.

Karoo Black Pearl L125 (AI) was the first of the bulls by this sire to be offered by Karoo and it certainly attracted a flurry of bids during the auction.

From the commercial cattle producer looking for quality genetics at an affordable price, through to highly regarded stud buyers filling the need for a new stud sire, the range of bulls offered by the Reen and Scott families catered for a variety of markets. 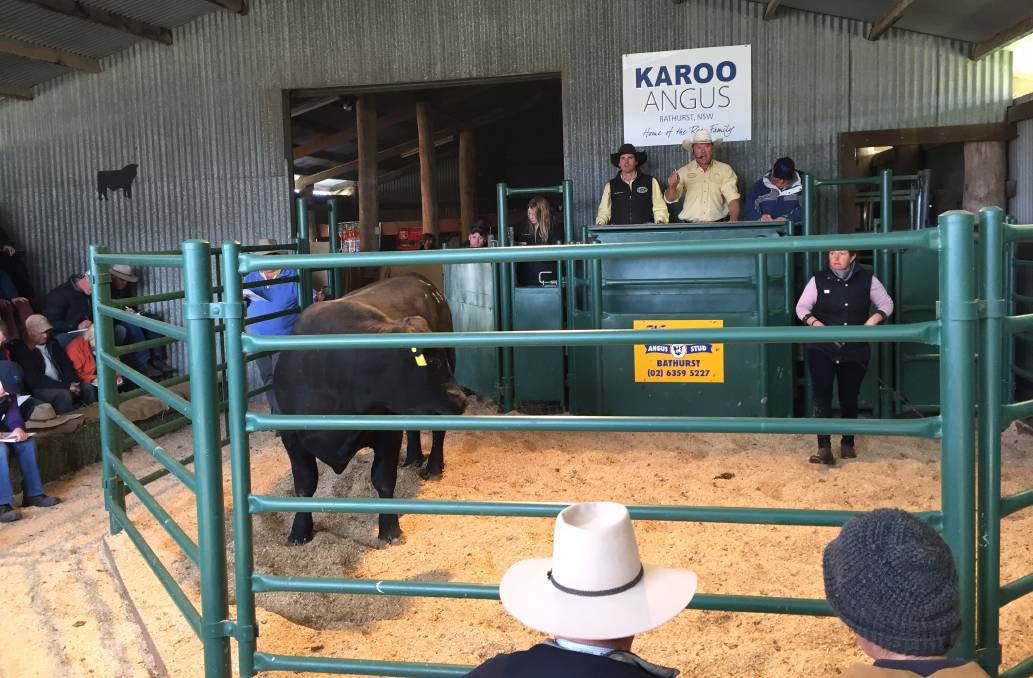 Annie Scott said there was a good balance between bulls selling for affordable values aimed at commercial cattle breeders, to those bulls making that bit more money which the stud operators were chasing.

“There was also plenty of return clients at the sale, which indicates to us that our bulls are performing when people get them home,” she said.

“We noticed a few new faces at the sale too, which was also good to see.”

“This bloodline has really clicked with our Karoo cows and Docklands is producing calves with even fat coverage,” she said.

This bloodline had also been well regarded for its low birth weight progeny which at the same time had high growth rates across the EBV spectrum.

Sion Hill Pastoral Company, Lyndhurst, was a volume buyer taking home five bulls for a top of $14,000 and an average of $8600.

A new feature at the sale this year was that pre-registered buyers went into the draw to win $5000 cash back towards the purchase of their bull.

The winner was drawn out of a hat at the conclusion of the sale and Robert Ward, who was buying for “Inchidoney”, Oberon, was the lucky winner.

The sale was conducted by Ray White Emms Mooney with Ben Emms as auctioneer.