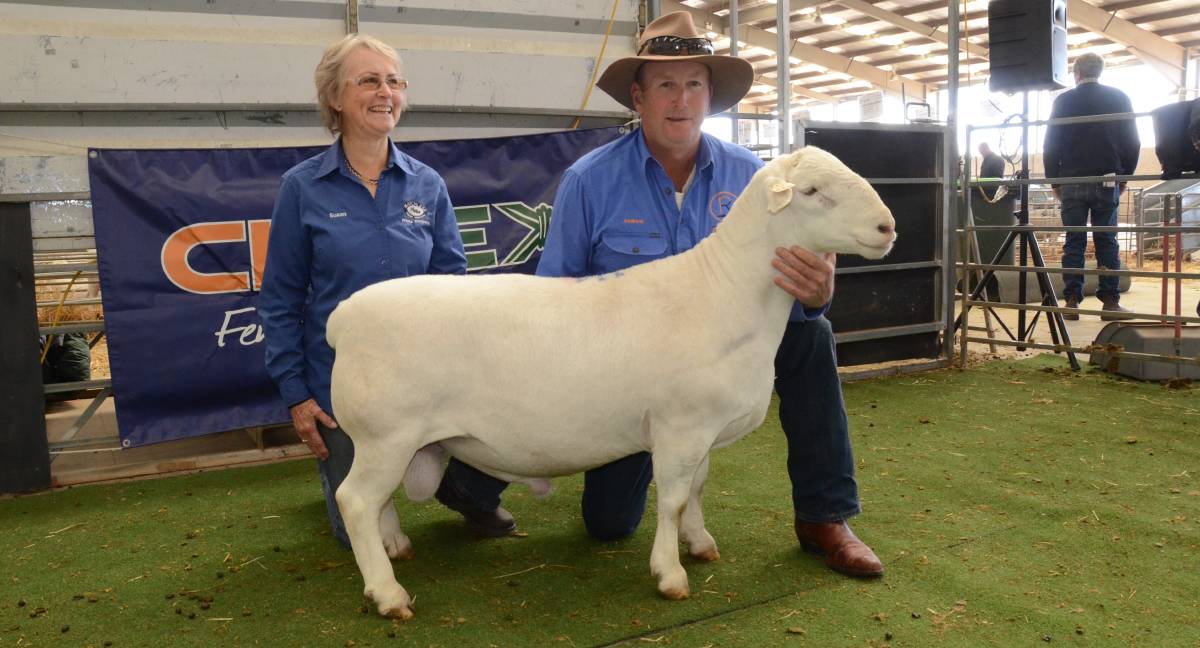 IT was the structure and correctness of the Matchless 150440, plus the hindquarters that impressed Andrew and Megan Mosely, Etiwanda stud, Cobar, so much that they bid to $7500 to secure the ram for the sale’s top price.

“We like the squareness of this ram – a really correct, sound ram,” Mr Mosely said after the sale.

The Type-4 ram weighing 104 kilograms was sired by Matchless 120814 and the only purchase of the Moselys who said they were looking for a ram with “more meat”.

“We have worked hard to fix shoulders and feet within our flock and we now want a little more meat,” Mr Mosely said.

Etiwanda Station runs 2000 White Dorper ewes of which 800 are studs nd the Matchless ram would add extra capacity to the hindquarters within the flock, Mr Mosely said.

The ram was one of a duo from Susan Law’s Matchless stud, Wellington, soon to move to Peak Hill under the management of Ben Stanford. The other ram by the same sire was a Type-3 weighing 101kg and purchased by AuctionsPlus.

Bellevue stud operated by the Curtis family, Millmerran, Queensland, sold five rams to $5250 and a $2450.

Two stud ewes, both Type-5, topped the sale at $1400 each and came from Amarula White stud of Justin and Lorroi Kirkby, Gravesend.

The first, weighing 59kg, by a Bellevue sire and joined to Flynn’s Champion Do, the grand champion 2017 Eastern Region Show and reserve champion at Dubbo show this year, was purchased by Nomuula stud, Moonbi.

The other weighing 56.5kg, sold to the Southern family, “Lyolia”, Thallon, Queensland, who purchased seven rams averaging $1293 and four stud ewes including one Dorper averaging $1313.