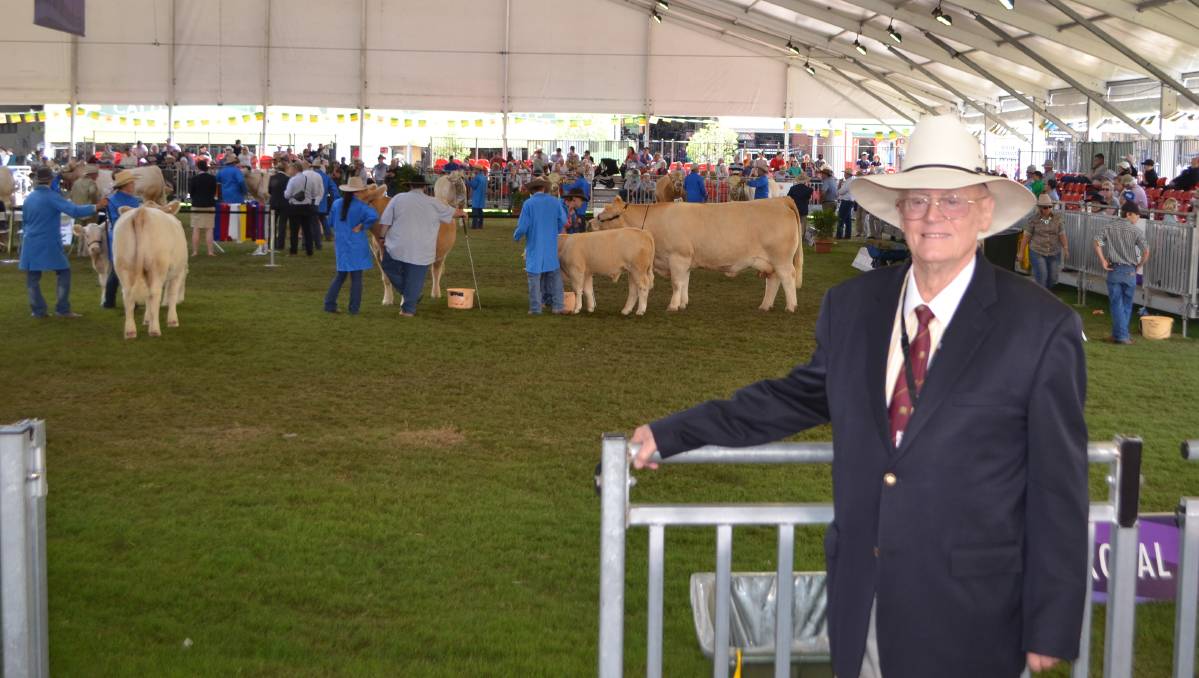 The late Mike Traynor, photographed taking a keen interest in the judging of a Charolais class during the 2017 Royal Sydney Show. Mr Traynor was a keen supportter of the annual show in Sydney for more than sixty years.

With the recent passing of Mike Traynor, the meat industry has lost one of it's most influential persons: one who nurtured many to long and successful careers

With the recent passing of Mike Traynor, the meat and livestock industry has lost one of it's most influential persons: one who nurtured many to long and successful careers in stock and station agency, meat processing and the stud cattle industry.

Michael Spencer Traynor who was born 19 April 1945 and died 7 September 2017, got his first taste of rural living when in 1950 his family moved from Balmain to the then rural suburb of West Ryde.

In his early teens Mike would wag school to work with the drovers taking stock off the trains at Flemington for the Homebush Sales.

“He regarded it a privilege to work for and alongside many of the 38 wholesale meat companies who supplied around 6000 butcher shops across Sydney,” livestock agent Tim Robinson said of the man who mentored him through the start of his career.

In October 1963 Mike got his first job as a trainee buyer for AJ Bush and Sons: starting at Gunnedah, he was later moved to Wagga and Dubbo to further his experience during which time he met many great buyers who became mentors and friends.

Mike soon learnt that a lot more goes on behind the scenes than just turning up buying quality stock and going home, and he often recalled stories of some of the industry’s more colorful identities and characters of the livestock industry.

To learn more about the finer points of buying livestock, Mike spent many hours in the chillers pouring over the stock that he had purchased and developing an understanding of how the meat sales component of the industry worked, a grounding that held him in good stead throughout his career.

In 1965 Mike was conscripted for national service but fortunately his unit was never called to serve in Vietnam.

After leaving the army Mike went back to AJ Bush, before he moved onto a small French meat company called Vanlaine, and then in 1968 Mike started with PD Mulligan in Homebush as a meat salesman.

Mike jumped at the opportunity to move out of the city when Mulligans built an abattoir at Cowra, Mike took on the role of wholesale and export manager.

This new position called on all of Mike’s industry understanding and skills and he quickly grew into the role, where he needed to step back from the day to day buying and spent a lot of his time training and mentoring young buyers and overseeing the administrative side of the business.

During Mike’s association with Mulligans as it grew from a little-known family business to being a major player in the meat industry.

By 1992 Mulligans was the ninth largest meat company in the country employing 1000 staff in two abattoirs and over 40 retail outlets in Sydney and Newcastle, and Mike had been promoted to operations manager overseeing a time when Mulligans were killing 32,000 small stock, 3000 cattle and 2000 pigs per week.

“Mike described it as a full-on role being responsible for livestock, skins and hides, filling in meat sales and collecting debts,” Tim Robinson recalled.

In 1997 Mike decided to take a step back and semi retire after 29 years with the Mulligan family. However as soon as word of his finishing up with the Mulligans got out, the phone started to ring!

Mike then took up a position with Elders as a livestock coordinator role that he stayed with for 10 years, working in many facets of the business including procurement, forward contracting, risk management and stud stock.

In 1998 Elders started the Killara feedlot at Quirindi, in which Mike became heavily involved.

He drew on his many years’ experience of feeding cattle with Mulligans to help the team build the number of cattle on feed from zero to 17,000 all under forward contract.

During this period Mike recalled being involved supplying beef for the 2000 Sydney Olympics as a highlight.

Mike had a love and a passion for the show ring and was a devoted patron of both the Sydney Royal Easter show, and the Brisbane Ekka.

Mike attended his first Sydney show in 1950 and never missed one for the rest of his life.

Mike had a particular passion for the Murray Grey breed of cattle and regarded them during their heyday as some of the best cattle he had dealt with.

Mike was a stalwart of the breed and was highly regarded by the breeders.

This was evident as under Mike’s selection, the Murray Greys won the Stan Hill trophy for best group of three pure bred steers for seven years in a row.

The MS Traynor perpetual trophy for Grand Champion Murray Grey Bull of the Sydney Royal Easter show is a trophy that Mike has sponsored since the early nineties.

In a recent conversation with Mike, he was asked what was his best show memory, and he diligently recalled the 1988 Sydney Royal Easter show, where he was asked by Jack Newham of Padua Murray Grey’s to parade his Grand Champion Bull ‘Padua Showdown’ a grandson of the highly regarded Michaelong Mesa Grandee in the Grand Parade.

The parade was pulled up for the visiting HRH Princess Ann to come down from the council stand to briefly meet Mike and inspect the bull which was a real highlight for Mike.

He judged at the Royal Canberra show ten times, The Ekka in Brisbane and the Adelaide Royal, along with countless country shows across NSW where his empathetic eye for livestock, his appreciation of good eating quality and what the end consumer wanted was respected by the exhibitors.

Mike was a mentor to so many young people from wide and varied backgrounds from the sporting field to all things agriculture.

“There are so many successful people who can and will acknowledge that the help, support and guidance that Mike was so giving of, was certainly a contributing factor to their progress and success,” Tim Robinson said.

“If Mike took a shine to you, you had an ally for life.

“He was very proud of the young people he mentored and boasted often of their success’ just like a parent or grandparent would.”

Mike Traynor had a career that stretched over 50 years in the meat and livestock industry and was a well-respected and regarded contributor to furthering industry knowledge and nurturing those who also had a passion for stock.

Mike proudly recalled one of his most rewarding relationships was with Chris Cummins, whom Mike met when Chris was only 16 years old.

Mike employed him as a trainee livestock buyer, and now 40 years later he is Managing Director of the very successful and well-regarded Breakout River Meats at Cowra.

Mike never married, claiming that he was married to the job: but he is survived by his brother Kerry, nieces and nephews, his close-knit connection to the Cummins family and the many young men and women who learnt and benefited from his generosity and wisdom throughout his 72 years.

In recalling the passing of his close friend and mentor, Tim Robinson said he would like to to leave you with a saying from Mike’s repertoire: “If you can’t see the light at the end of the tunnel, go down and light it yourself!”

His funeral will be conducted on Saturday 23 September at the Mona Vale General Cemetery to commence 10am followed by a reception at the Palm Beach RSL.