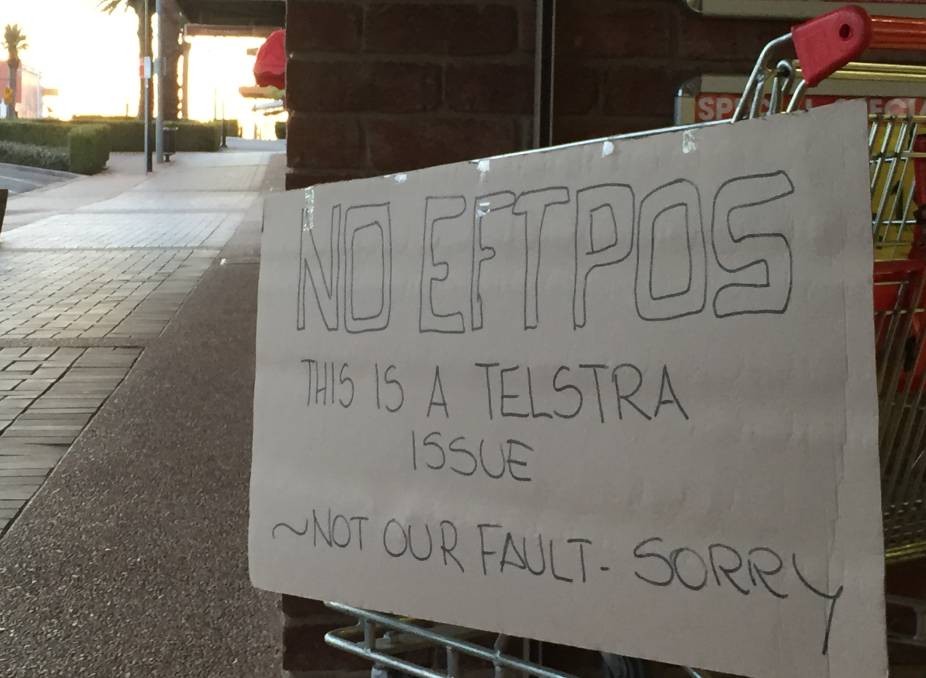 IGA store at Harden warned customers but tempers still flared with no EFTPOS system and ATMs knocked out by the Telstra breakdown.

Country blackout leaves locals struggling to get food and cash

A whole town has lost Telstra mobile coverage for four days, forcing frustrated locals to ask for IOUs from businesses after eftpos systems collapsed and businesses lost thousands of dollars.

The telecommunications chaos started in Harden on the south-west slopes on early Friday, and Telstra was still struggling on Tuesday to get services back up and running. It said normal services were restored about 10am on Monday. Originally on its website, it said ADSL services would not return until September 25.

Hilltops Council on Monday said it had no idea what had happened or when services would be restored, and it had been left in the dark. Harden’s 2000 citizens struggled to communicate with each other with no emails as well. It had some sad consequences as well - a family could not inform relatives of a death of a loved one in the family.

A simple broken part in a transmission tower was believed to be behind the extraordinary situation. It took out the Telstra base station as well.

Tempers boiled over at Harden’s IGA store when customers were told they could only pay in cash. They were told to go to a Bendigo Bank ATM up the street which was also knocked out by the Telstra blackout. The store was losing thousands of dollars a day in lost patronage. Meanwhile, locals asked businesses on Saturday morning if they could do IOUs without cash. The local service station only handled cash and manual imprints on cards with a $60 limit.

At Harden Motel, Alison Doberer found she was in the middle of the chaos as a large golfing tour was underway from Sydney with all her guests forced to pay in cash and then unable to contact loved ones while away. People just turned up at the door without ringing through for bookings.

“It’s caused a lot of angst and basically we have been left in the dark on when systems will return,” Ms Doberer said. “There’s been nothing from Telstra, we haven’t heard a peep. There is no end date to when disruptions will stop. It was very difficult for the golfers who came down from North Rocks for a tournament who couldn’t contact wives or partners.”

A medical conference was cancelled in Harden on Monday and a truck driver who passed on his vehicle to a Harden man for their weekly run couldn’t contact him and luckily  was able to track him at his home early in the morning so he could take on the goods in the truck.

Journalist Jody Potts from the Harden-Murrumburrah Express was placed in the terrible position of losing a loved one and then not being able to contact relatives about the death.

“A lot of elderly people, and there are many in Harden, have got rid of their landlines for mobiles, so how do they call people ?,” Mrs Potts said. “It’s unbelievable.”

You couldn’t also get a bet on at local pubs or  play keno.

Telstra said in a statement to The Land: “We are sorry for the disruption to services at Harden caused by a hardware failure, and understand the frustration this can cause.”

“Services are being progressively restored today (Monday) and we thank our customers for their patience.”