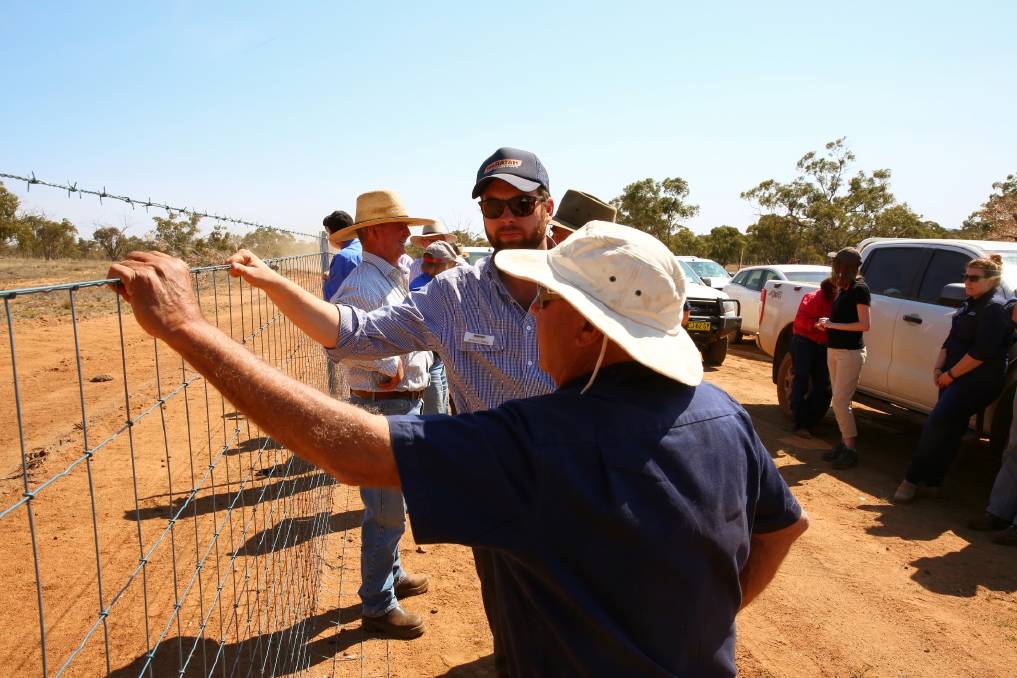 Touch test: about 100 farmers and guests gathered at Glenn Turner's "Penshurst" Gilgunnia to see the huge cluster exclusion fence put up by 16 landholders in the area covering more than 177,000 hectares.

A crowd of close to 100 people made the long trek out to Gilgunnia to see at first hand the huge cluster exclusion fence built by 16 farmers.

The open day at Glenn Turner’s “Penshurst” gave farmers a first-hand look at the potential of exclusion fences to stop feral pests and help improve crop returns and protect pastures.

Already herds of 500 or so pigs have been found clustered up against the fence unable to get through.

Sheep producer Will Roberts, who was one of the farmers who built the huge Morven fence in southern Queensland, was one of the guest speakers. He told the crowd that his lambing rates were now 100 per cent on his property “Victoria Downs”, after previously being about 15 per cent before the fence due to wild dog attacks.

After a barbecue, the guests  toured the cluster fence on Penshurst. Mr Hague was pleased with the turn out.

“There has been a lot of time, work and effort go into this project by a lot of people so to see it be such a success is very rewarding,” Mr Hague said.

“Hopefully the landholders that visited got an idea of what is involved in the project, what the benefits are and why it is such a good investment for landholders.

“It was also great some of the invited guests such as Mark Coulton could attend and see first-hand that the funding the Gilgunnia group received from the Federal Government has been put to good use.”

Work commenced on the project in November 2016 and was only recently completed.

If landholders want more information on cluster fencing, they are encouraged to contact their nearest Western Local Land Services office.