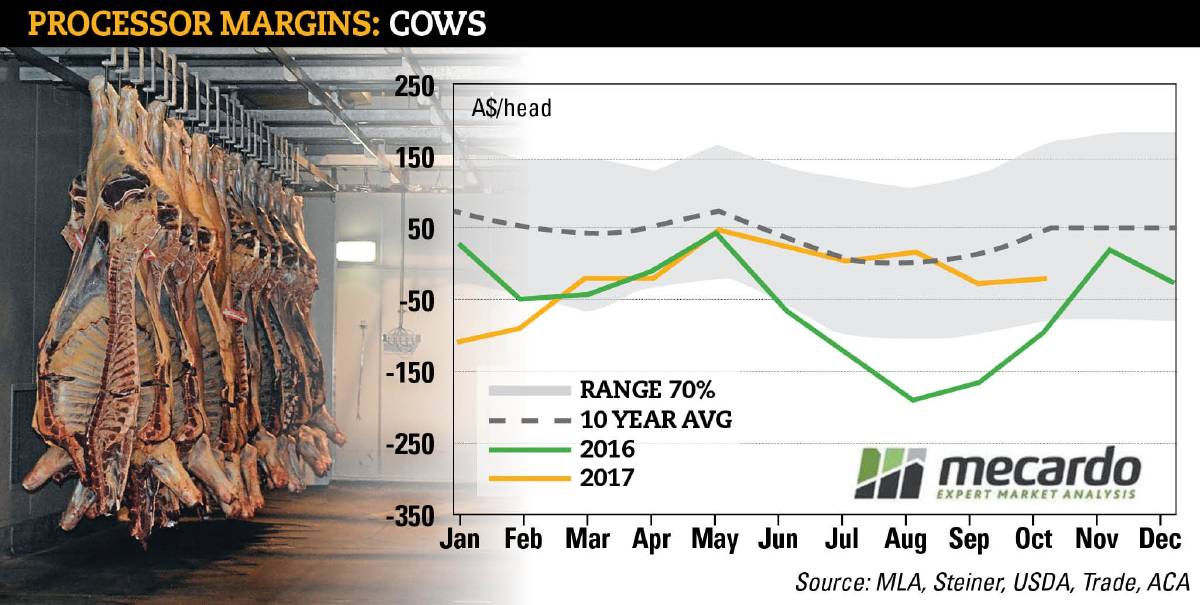 Market analysts Mecardo’s theoretical cut-out model indicates the annual average processor margin for this season sits at a loss of $20 a head. Margins succumbed to rising input costs in the last few months after some winter relief.

IT has been a year marred with plant closures, hefty throughput cutbacks and some of the harshest terms of trade in the beef processing sector’s history, all against a backdrop of intense scrutiny.

IT has been a year marred with plant closures, hefty throughput cutbacks and some of the harshest terms of trade in the beef processing sector’s history, all against a backdrop of intense scrutiny.

It has also been a year of internal controversy for the processing sector as it grappled with differing perspectives on issues such as objective carcase measurement technology and increased transparency and market information flow.

At the same time, a turning point seems to have been reached in terms increased understanding among other beef supply chain participants, and the general public, of the challenges, and value, of Australia’s red meat processing business.

It’s an industry that contributes $23 billion to Australia’s gross domestic product per year and is the backbone of many regional and rural communities.

Despite that, it is a business that has traditionally very much kept to itself.

That has started to change, albeit very slowly.

Part of the impetus for that has perhaps been Senate, Australian Competition and Consumer Commission inquiries and investigations, and heavy political attention, particularly in relation to a perceived high level of mistrust between processor and producer.

But the other driving factor has been the idea of heading down a value based marketing path to deliver on consumer demands for meat eating quality and a sustainable production story.

A key component of that, by necessity, will be greater information flow to the producer and a more open door policy for processors.

Some are embracing this idea of closer supply chain relationships, others argue it is fraught with complexity and can not be rushed.

Where the processing sector has “opened up”, there has been strong support, such as in the bid to see action on regulatory reform.

As the extreme shortage of livestock sent prices skyward and that collided this year with an increasingly competitive export environment, upward movement of the dollar and spiraling energy costs, processing plants were forced to cut back shifts and some eventually closed their doors entirely.

That dramatic event brought to a boiling point the urgency for governments to start listening.