Grain Producers chairman Australia Pete Mailler has thrown his hat into the ring to take on Barnaby Joyce in the New England by-election. 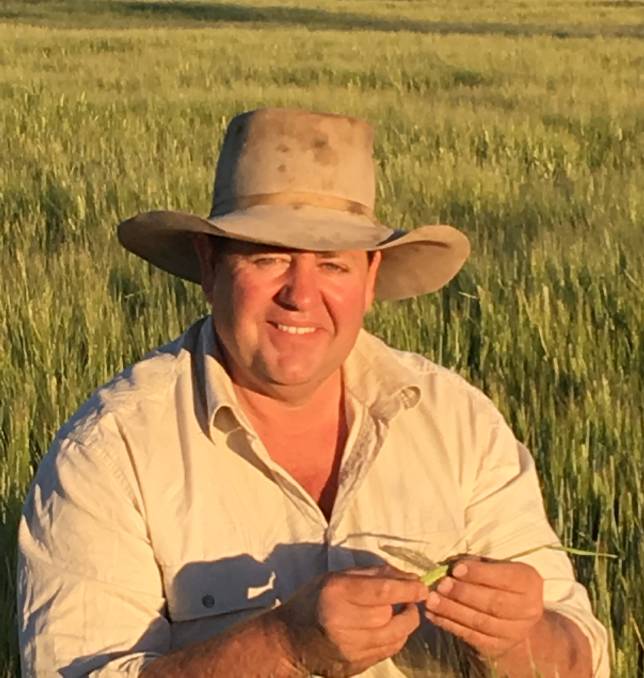 Peter Mailler putting his hand up to contest against Barnaby Joyce for New England.

LOCAL farmer and founding Grain Producers chairman Australia Pete Mailler has thrown his hat into the ring to take on embattled Nationals leader Barnaby Joyce in the New England by-election, for CountryMinded.

The 46 year old grain and cattle producer ran at number one on the NSW Senate ticket at the 2013 federal election for Bob Katter’s Australian Party and stood at last year’s poll for CountryMinded in the Queensland Senate election.

His brother David Mailler ran against Mr Joyce in New England last year securing just 1.4 per cent of the vote in a contest that included former independent member Tony Windsor who has indicated he won’t stand at the December 2 by-election.

CountryMinded attracted 0.07pc of first preferences in the NSW Senate result at the double dissolution election in 2016 and returned 0.10pc in Queensland.

Mr Mailler describes himself, tongue-in-cheek, as a “fat, one-legged farmer from Boggabilla” and is still in the midst of this year’s harvest.

He says he plans to run most of his by-election campaign from his header while working on the farm and will be restricted due to time constrains in what events he can attend.

He believes Mr Joyce has an unfair advantage by not having any other commitments to attend to over the next five weeks, except campaigning, following his disqualification from federal parliament.

“It has become a circus now and the fact is Barnaby Joyce is out of parliament now and he isn’t a minister so it makes things very difficult for everyone else who have things to do outside of campaigning,” he said.

“He has nothing else to do but campaign and he can just turn up at every cattle sale – but there should be a contest because we need a credible alternative, which is what CountryMinded was set-up to do.”

the New England,” he said.

After declaring his hand this week, Mr Mailler said it was important for local voters that the New England by-election was contested.

“I am pleased to accept the endorsement of the executive of CountryMinded to stand and push for a better deal for the people of New England,” he said.

Mr Mailler said he recognised the natural sympathy people had towards Mr Joyce and his disqualification from parliament due to dual NZ citizenship, which triggered the by-election.

But he said “there is a lot more to think about in this election”.

“Regardless of why we are having a by-election, it is an election and it should be contested on its merits,” he said.

“The voters in New England have an extraordinary opportunity to influence politics positively for their electorate and the nation because this election effects the Coalition’s one seat majority.

“The result of this ballot determines what happens to the Coalition’s one seat majority in Canberra.

“New England voters have got a genuine opportunity to secure a better political deal from this election.

“To get a better outcome they must not return the Nationals.”

Mr Mailler said he was not advocating any change in who forms government, but “there is a unique opportunity to politically leverage the government’s need for confidence and supply to maintain their hold on power” he said in reference to a hung parliament like that of which Mr Windsor held one of two critical votes from 2010-1013.

“The Coalition will be motivated to retain office for the maximum possible term,” he said.

“They must deal with whoever holds the seat of New England on behalf of the electorate, unless that person is already a member of the Coalition.

“In other words, Barnaby Joyce can’t leverage the political power on offer to the electorate of New England, to get a better deal from this government from this election.

“This election is a pivotal moment in the future of New England and for rural and regional Australia generally.

Sponsored by
Recent rainfall has created strong supply prospects - not only for the summer crop currently in the ground, but also this year's winter crop.
Test
GrainCorp recorded 140,510 tonnes delivered in its final report of the season.
Test
The event was slated to be held in Tamworth this weekend.
Test
The new methods cover blue carbon, plantation forestry, abatement from industrial and commercial processes, and biomethane.
Test
Farmers impacted by the November floods can apply for up to $50,000 to salvage damaged crops and stock, rebuild fences and replace machinery.
Test
"We've given them real, credible, tangible information and they've done nothing about it."
Test
Small town spirit and a sensational racetrack made the 2022 Glen Innes Cup day a success.
Test
New research from the University of New England shows using fresh manure from feedlots could be impacting human antibiotic resistance.
Test