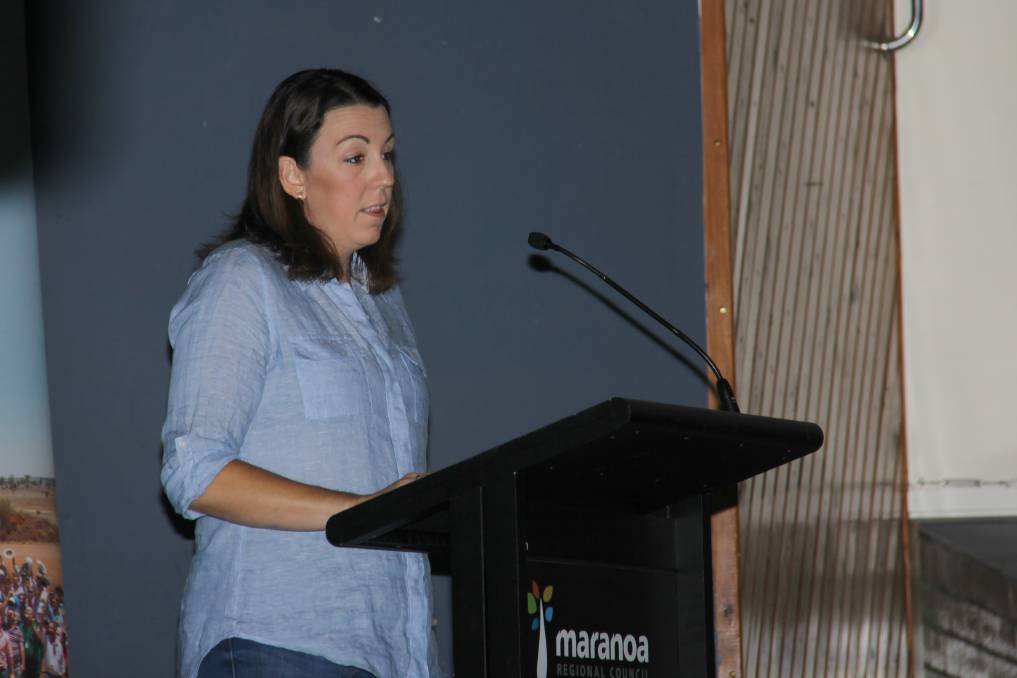 Carmen Roberts speaking at the Young Beef Producers' Forum about smart technology and the importance of the customer revolution.

Industry 4.0 and the customer revolution are significantly changing the functions of the agriculture industry.

Huge technological advances in recent years and an increasingly demanding consumer base has meant Australian agriculture has needed to embrace technology.

Attendees at the Young Beef Producers Forum in Roma heard from Compass West owner Carmen Roberts about how agriculture has been driving the fourth industrial revolution, known as Industry 4.0, and the impact of the latest customer revolution on agricultural businesses.

“Every device we have these days has WiFi, Bluetooth capabilities,” she said.

“Industry 4.0 is about connecting smart objects with dumb objects basically.

“Everything about Industry 4.0 is about how we can take everything we already have connected to produce more results; more innovation, more efficiency, and basically to continue the future of innovation itself.”

In the two years since Industry 4.0 began, Australia’s agriculture industry has been on an accelerated path towards being far more efficient through the connection of everyday objects to intelligent objects.

Ms Roberts said Australian agriculture is now one of the most advanced industries in the world, not only in technology and innovation, but the ability to automate, reduce waste and collaborate.

The emergence of remote-controlled harvesters, driver-less tractors, stock monitoring through the use of drones, and water monitoring systems has created a trend towards being more efficient, and seen an increase in data used to make crucial decisions.

“What used to be just a float in a trough in a paddock is now connected to a device which can transpond information through the internet or Bluetooth or through radio waves depending on which portal it uses,” she said.

For those still skeptical about the place of technology in agriculture, Ms Roberts suggests embracing it or potentially being left behind.

“If we don’t want to be chewed up and spat out by multinationals coming in and buying up and being more efficient then the only way for the mum and dad succession sort of farmer to survive is to embrace these technologies and make their enterprises as tech based as possible so they can get the most out of it,” she said.

“I'm not trying to say that Industry 4.0 does away with people.

“It just does away with inefficient roles more so than anything.”

The increase of technology in the agriculture industry has also seen an increasing involvement of consumers, known as the customer revolution.

“The customer revolution is about your customers being more connected to your products than you are in some cases,” Ms Roberts said.

“It's bound by technology, it's connected and it's complex.

“The customer revolution is filled with knowledgeable people.”

While most of Australian agriculture is embracing the emergence of new technologies and the efficiencies they create, Ms Roberts said taking the customer revolution into account is one of agriculture’s biggest downfalls.

“One of the problems is that they've (the farmer) never stopped to look at who their customer is,” she said.

“They might know who they sell to, they might know where the cattle go, but they're not really targeting a particular market and I think that that really needs to change in ag.

“They need to identify their customer and the customer revolution because, as I said, that person has the power to diminish your entire business and not knowing who they are means you're basically running a business in the dark.”

While there has been a big push by the lamb and pork industries in the past ten years to identify their target market and communicate with consumers, Ms Roberts said the beef industry is falling behind.

“I think the beef industry especially is a little bit behind in looking at who their core customer is and how to better service them,” she said.

“Clearly there are some innovators in the space, but your everyday farmer, more likely than not, hasn't sat down and thought well who am I selling to and what message am I trying to relay.

“As part of the customer revolution that's important.

“As Industry 4.0 is all about connecting, it is a good time to decide who your business is selling to.”