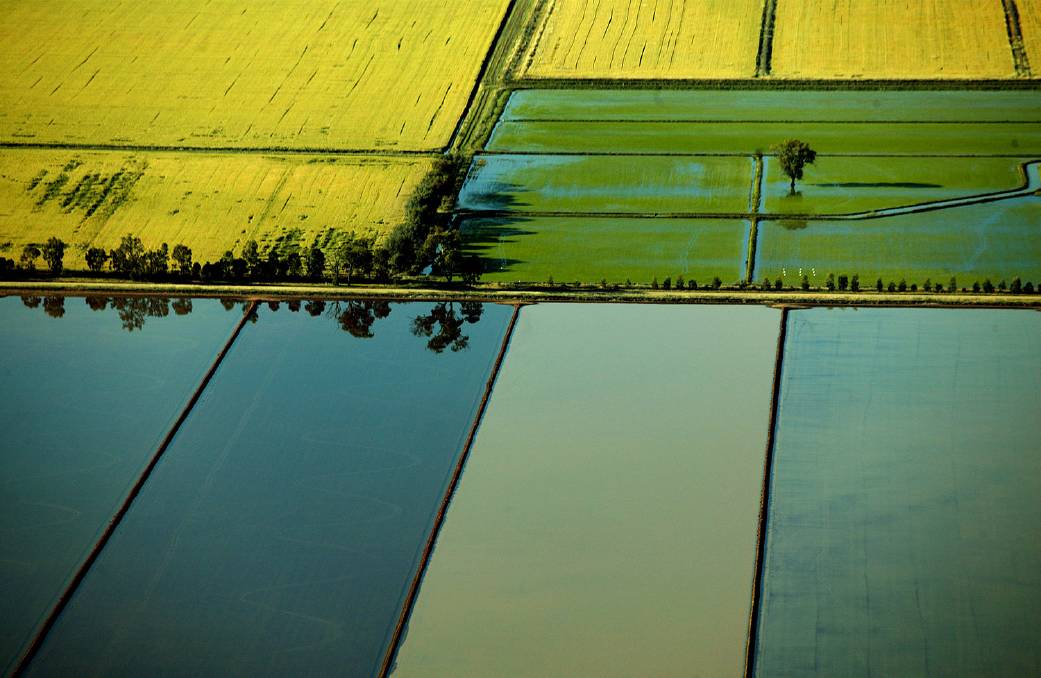 The Wentworth Group of Concerned Scientists say the lack of Murray Darling community funds is damaging the quality and quantity of water recovery.

COMMUNITIES are being sold short in the Murray Darling water reforms, receiving just 1 per cent of the $8 billion of Basin Plan economic readjustment funding, according to the Wentworth Group of Concerned Scientists.

The group has long argued water recovery from irrigation is too slow and warn the reform's recent focus has been misdirected at equivalent water saving infrastructure projects, instead of direct buybacks.

They have released today a report to mark the Basin Plan’s five year anniversary, but despite their focus on human impacts many in Basin communities will remain sceptical of more buybacks.

About $8b has been spent on the Basin Plan, including $130 million on community readjustment.

Significant political pressure has resulted in national water reform slowing to a trickle. This pressure has been exerted on governments to halt water buybacks and unwind water recovery targets. - Wentworth Group of Concerned Scientists

They want $500 million of the remaining $5b in Basin Plan funds invested to help local economies adjust to a future with reduced irrigation allocation.

The report makes a withering assessment of the Basin states' sustainable diversion limit (SDL) adjustment projects, which allow them to swap a cumulative 605GL of direct water recovery for efficiencies achieved through infrastructure works.

Economic impacts from reduced irrigation entitlements is one of the most contentious issues for all stakeholders.

The Wentworth Group said of the 37 SDL projects, only one is approveable; 11 projects that promise to deliver somewhere between 150GL to 270GL lack crucial information and; 25 promising between 316GL to 436GL do not meet the criteria of the Basin Plan. 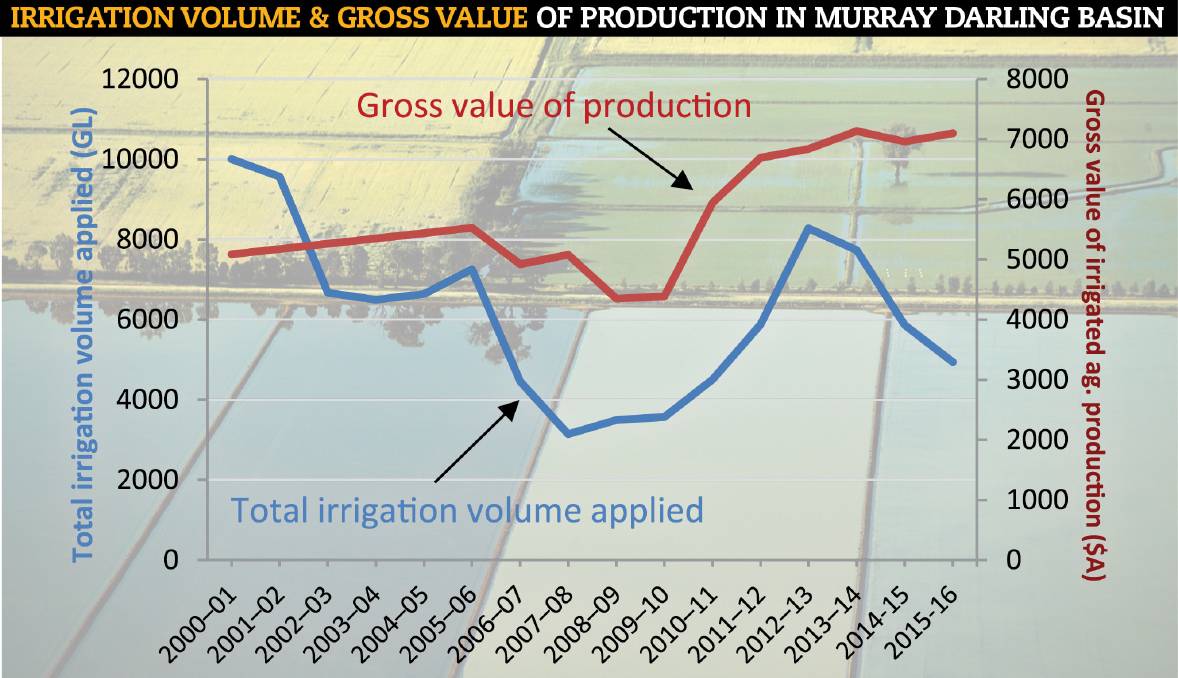 The Wentworth Group says improved practice, increased trade and infrastructure investment has more impact on the Basin's ag production than water entitlement buybacks, which has increased when allocation fell.

They want buybacks to replace these equivalent savings and argued the Commonwealth must work with local governments and stakeholders to develop strategic investment for diverse economic growth to replace irrigation allocation.

The Basin supports a whopping farm sector that employs 8pc of workers across the region and generated gross value of $19.4b in 2015-16, more than a third of national value.

Its irrigated farms accounts for 37pc of gross value of production while dryland produces 63pc.

Drawing on a study from the Australian National University the Wentworth Group said on average irrigated businesses had benefited from subsidies to help them transition to more efficient water use, and water recovery was not the main driver in the drop in irrigation businesses.

The 51pc decline in number of irrigated business across the Basin during the water recover process over the 11 years from 2004-5 was in line with trends across the farm sector.

The Wenworth Group said drought had impacted employment levels more than allocation. From 2000-01 to 2007-08 irrigation allocation fell 70pc, but the value of irrigated ag fell 15pc.

Ag employment fared worse in the Basin, falling 26pc in past 15 years, but that slowed to a 4pc fall during the past 5 years. Ag employment grew 4pc nationwide while employment across the Basin grew 2pc, driven by education and healthcare .

Generally economies of large centres have grown, while the smaller retreated. The Wentworth Group wants 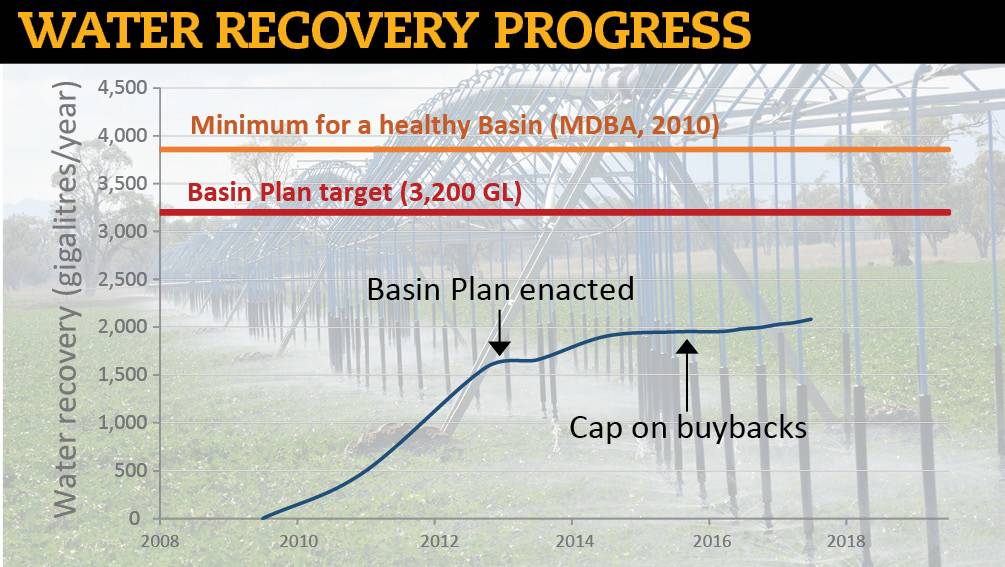 Wentworth scientists argue 4000GL is the gold standard of water recovery for environmental health, and are frustrated that progress has recently slowed.

Griffith has been a hotspot of reform opposition. It experienced mixed fortunes during the drought years but is now more prosperous. Since 2001 ag employment has increased 17pc, with noted investment from Bajada in poultry production.

Shepparton has recorded 12pc overall employment growth, but a 20pc decline in ag employment while Deniliquin's ag employment plummeted 75pc and the number of ag business dropped from about 500 to 130 between 2003 to 2015.

Government investment in farm modernisaton and water entitlement acquisition has delivered, on average, $365,000 to irrigated businesses in the Basin, which could rise to $600,000 as the remaining funds are spent.

Pressure from NSW and Victorian governments as well as community groups has increased focus on non-flow measures such as infrastructure projects to return the outstanding 1117GL from irrigation.

Nearly two thirds, or 2083GL has already been taken back from consumptive use. But 80 per cent of that was achieved under a Basin Plan precursor policy from 2004, the National Water Initiative.

​In the past two years, just 133GL has been recovered.