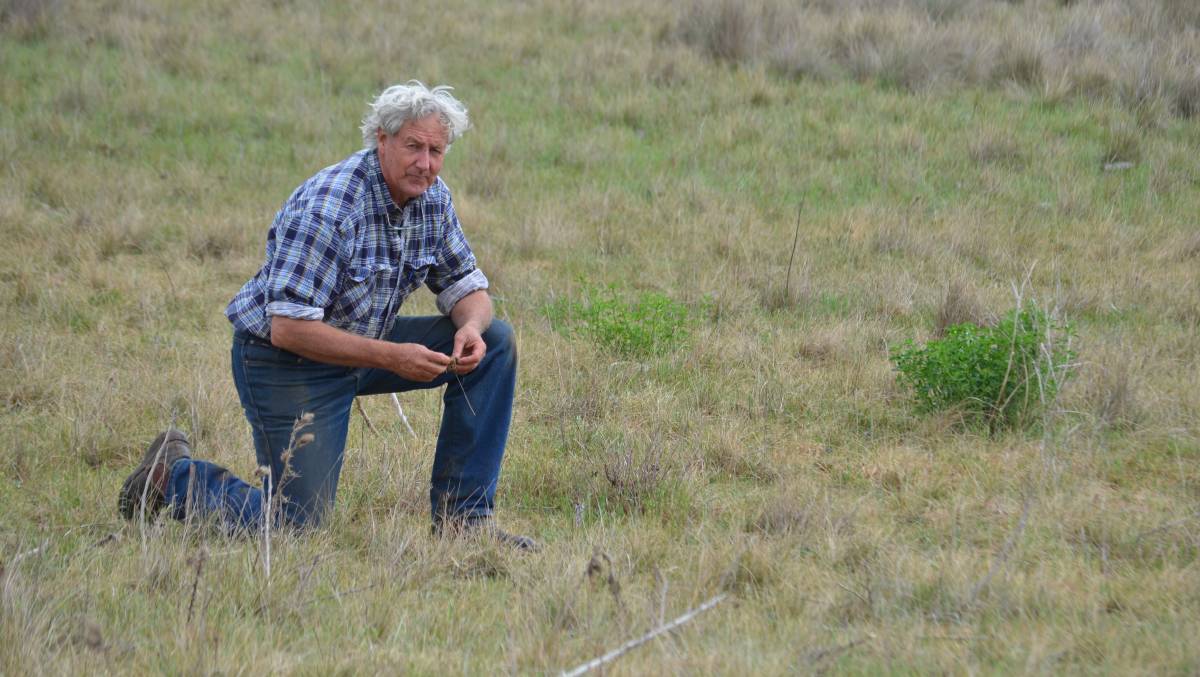 Charlie Massy, "Severn Park", Cooma in a paddock three weeks after it had been grazed and showing tremendous regrowth of native species among remnant improved pasture species and volunteer lucerne.

'Grazing for the landscape' is Charlie Massy's approach as custodian of his families Monaro property.

“You have to graze for the landscape,” is Charlie Massy’s approach to maintaining production of his Merino flock on the family property “Severn Park”, south of Cooma in the heart of the Monaro.

The country is mostly a combination of granite and red/black basalt which was traditionally farmed from the time of European occupation: and Mr Massy thought the paddock visited by The Land at the end of October had last been ploughed ‘thirty-odd years ago’.

“I’ve been holistically grazing it for probably fifteen years, and we can see lucerne volunteering in,” he said.

On the rocky outcrops which have never been disturbed by the plough, Mr Massy was pleased to point out the spread of kangaroo grass, native clovers and other native species along with sub-clover spreading between the rocks.

”This has been grazed three weeks ago, and you can still see the cover we are trying to keep in a tough year like we have had,” he said.

“We never try to knock down more than about fifty percent of paddock growth just to keep the photosynthetic capacity going.”

In describing the pasture species now prevalent in this paddock, which is truly representative of his entire farm, Mr Massy is seeking a medley of plants to ensure soil health and intimately sheep health.

“Essentially, we are after diversity, natives and exotics, it doesn’t worry me as long as it’s diversity,” he said.

“And deeper more moisture absorbent soils and healthier micro-biology in the soils.”

When discussing the rainfall across his land, Mr Massy said a rolling twelve month average is more relevant than the commonly accepted 12 month calendar period.

“That is more meaningful than the annual record, and we are only sitting on half our annual rainfall [at the end of October],” he said.

Yet he was able to say he expected to be able to graze the 15 hectare paddock by the end of November, and anticipates a fair bulk of feed.

“At the moment we wouldn’t put in anymore than 1500 DSE for two days,” he said when explaining the process of his grazing management.

“We don’t usually graze any longer than that, and within reason try to get as much animal density as we can.”

Mr Massy said he continues to subdivide paddocks to increase that density factor and to better drive the ecology of his farm.

His stock numbers have definitely not decreased, even though he no longer spreads fertilizer and with virtually no chemical use, as any ‘pasture improvement’ is done through a ‘no-kill’ approach.

“There is a little bit of depression in production while you are changing your ecology,” he admitted.

“But now it seems to me we are slightly increasing and I know from studying the top operators, you can get a doubling as you buildup your ecology and your resilience and productivity.”

For Mr Massy, the concept of holistic grazing is a ‘game-shifter’. 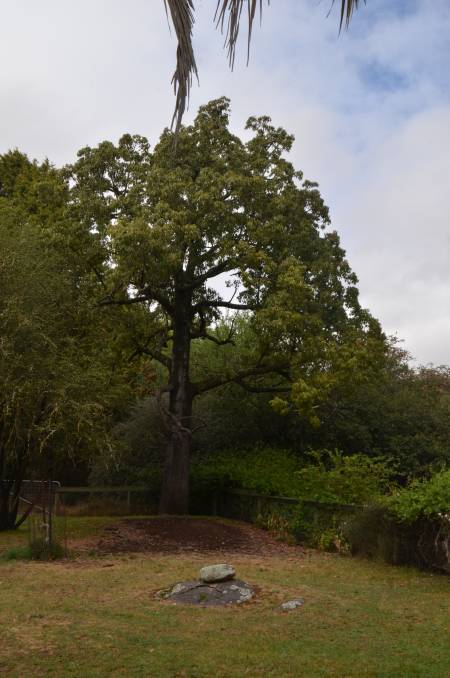 A Kurrajong tree in the garden at "Severn Park", Cooma. It is the last of seven and is estimated at being over 400 years old. It is also thought the four trees were deliberately planted by an indigenous tribe, as they aren't specific to the high and cold Monaro.

“What goes on in our head determines how we manage and once you start holistic grazing and regenerating, basically putting more solar panels on your ground for longer, we put sugars into the soil which builds more soil bugs we get more perennials with variety and deeper roots you are absorbing more moisture,” he said.

And in a landscape which is always going to have variable rainfall, the more use which can be made of that which falls and does not run-off must be of significant benefit.

“In a nut-shell, your effective rainfall goes up and the soils become more healthy with more photosynthesis,” Mr Massy said.

“You are increasing production and you are much more resilient, with much water being stored in the subsoil.”

That is the secret according to Mr Massy of his holistic approach to grazing the diversified pastures on his property, mimicking the natural grazing patterns of animals in the wild.

“You are almost increasing your rainfall through greater absorbency and hence your resilience to droughts,” he said.

Kurrajong trees are not found naturally on the high and colder parts of the Monaro. 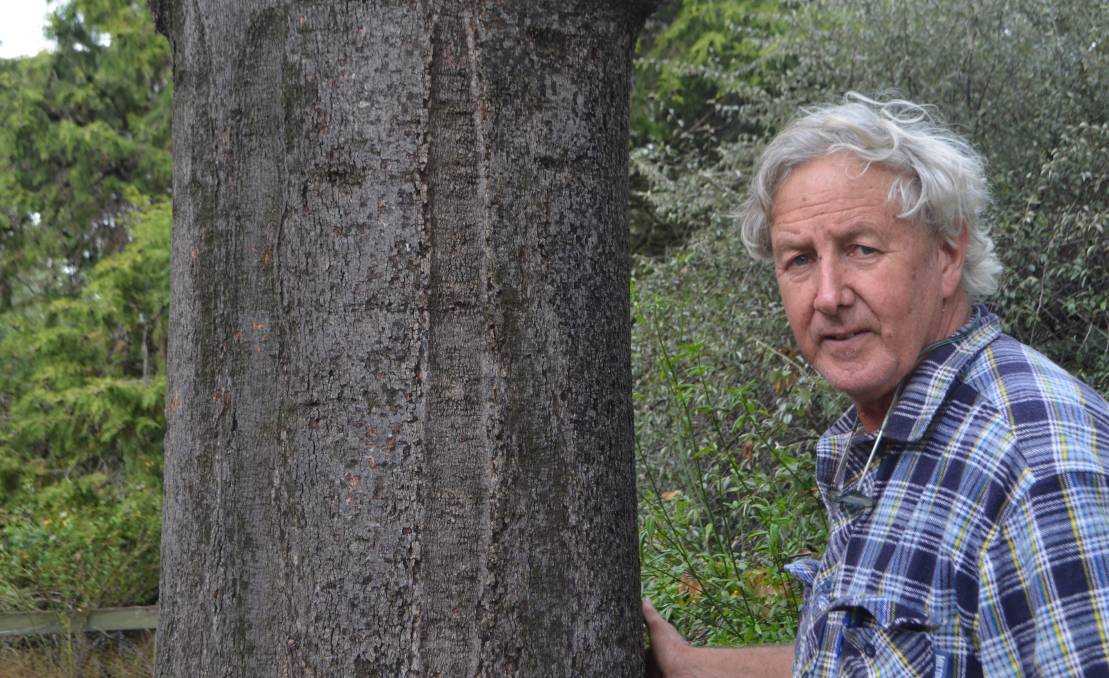 Charlie Massy beside the 400 hundred-year-old Kurrajong tree in the front of his house showing the scars of bark removed to make string by aboriginal women who lived on the Monaro prior to European settlement.

Mr Massy is aware his father remembers there were seven in the 1920’s when the farm was purchased; but he can only recall two and now only one survives.

From his research, Mr Massy believes the area upon which the garden surrounding his home sits was once a place of significant value for the aboriginal tribes.

He has written … This old tree represents an integral, milleninia-long connection to country: an ancient connection deeper than we can imagine, and linking us indivisibly with the natural world.

After a decade of traditional management, Mr Massy was learning to take more notice of the plants which would have plentiful on the farm but which now only existed in isolated clumps or as single specimens continuing to fulfill their distinctive place in the environment.

One such plant is the tree violet (Hymenanthera dentata), but known on the Monaro as a gruggly bush. 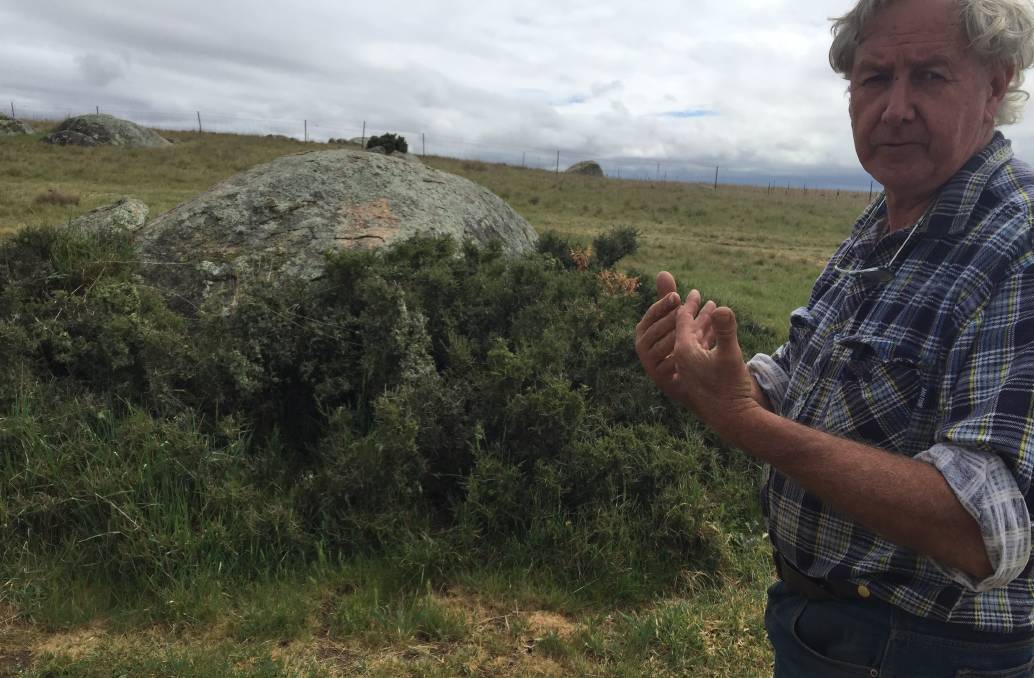 The plant which Charlie Massy originally thought 'nondescript' but upon a closer look, learnt it was the tree violet, otherwise known locally as a 'gruggly bush'

The plant is covered in rigid and small thorns giving it some protection against grazing: but in bloom it is covered by a myriad of little, bell-like pale-yellow flowers emitting an overpowering honey-blossom scent and attracting native bees, flies and bright orange parasitic wasps.

That host of insects is vital to the maintenance of the plants as is the health of the under story in supporting the ecological function of the landscape.