Into his 90th year, Jack Jones continues to class the wool grown by his family in the southern Riverina. 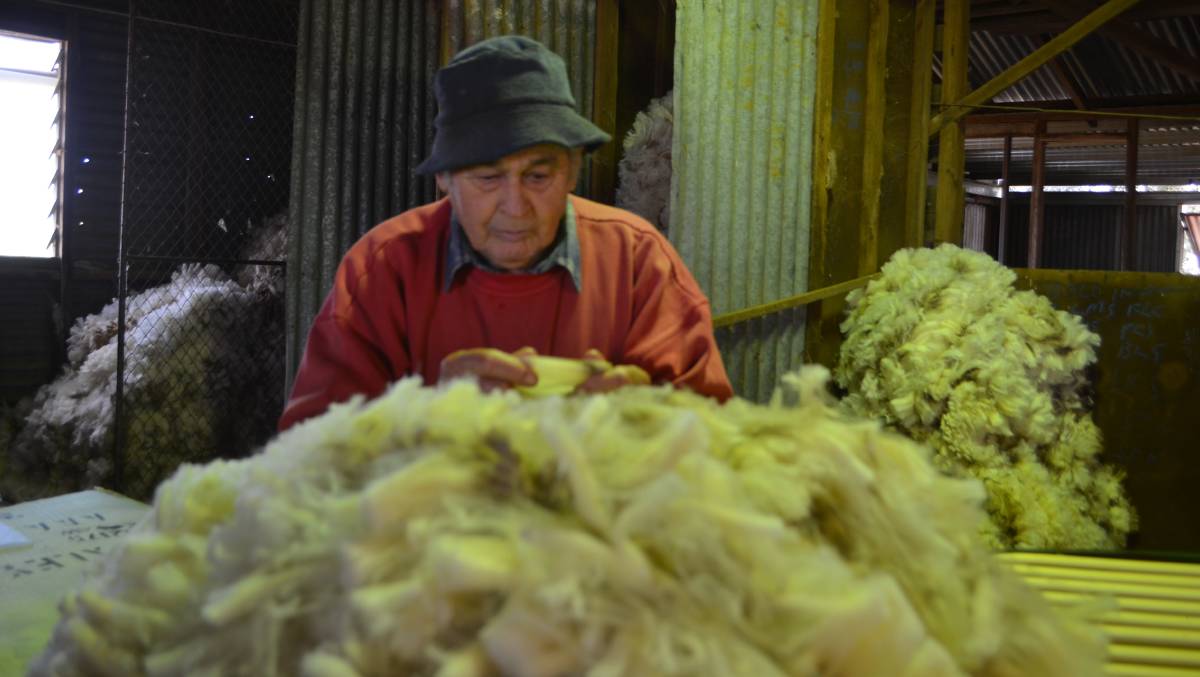 Into his ninetieth year, southern Riverina farmer Jack Jones continues to cast his eye over the annual clip shorn from the Bond Corriedale ewes grown on the Urangeline-district property held by his family for over one hundred years.

Mr Jones, along with his wife Marie and son Graeme operates the mixed-farming operation and said he will continue to work as long as he is able.

“I enjoy what I am doing,” he said as he flicked another staple of the Bond Corriedale fleece he was classing to test it’s tensile strength.

Without the aid of eye glasses, Mr Jones is able to see the characteristics of the fleece and he has faith in his sensual feel of the wool as he places it in one of the lines he has set for shearing at “Shute’s Block”, near Rand.

“I just love wool and the way it handles,” he said as he caresses another fleece for it’s essential softness.

“When you are classing the wool, the handle tells you a lot.”

With his eight brothers and one sister, Mr Jones grew up on the family farm and in 1948 he started learning about wool through a correspondence course because it was one way for him to earn an income to supplement what could be made from the farm.

“I intended staying on the farm, and I thought if I had a wool classing stencil there would always be work in the sheds around the district,” he said.

The southern Riverina had always been an area where smaller mixed-enterprise family farms operated on rather fertile and well-watered country, with many sheep flocks grazing alongside wheat and oat paddocks.

With many returned servicemen taking up closer-settlement blocks after the war just in time for the boom in wool prices in 1951, Mr Jones’ study to be a wool classer was neatly timed and he was able to work in many sheds close to home without having to travel far.

Although Mr Jones never classed in the big sheds of the western Riverina, he did spent a season in the Younghusband’s woolstore in Albury, during the time when Albury had many woolstores preparing Riverina-grown clips for sale.

“It was for experience, but I have really only classed our own flock along with a few neighbours’ flocks,” he said.

Mr Jones has noted many changes in the wool industry during his time, and cites classing the fleeces by measurement as one of the most significant.

“Objective Measurement has made classing a lot easier because there are a lot less lines,” he said.