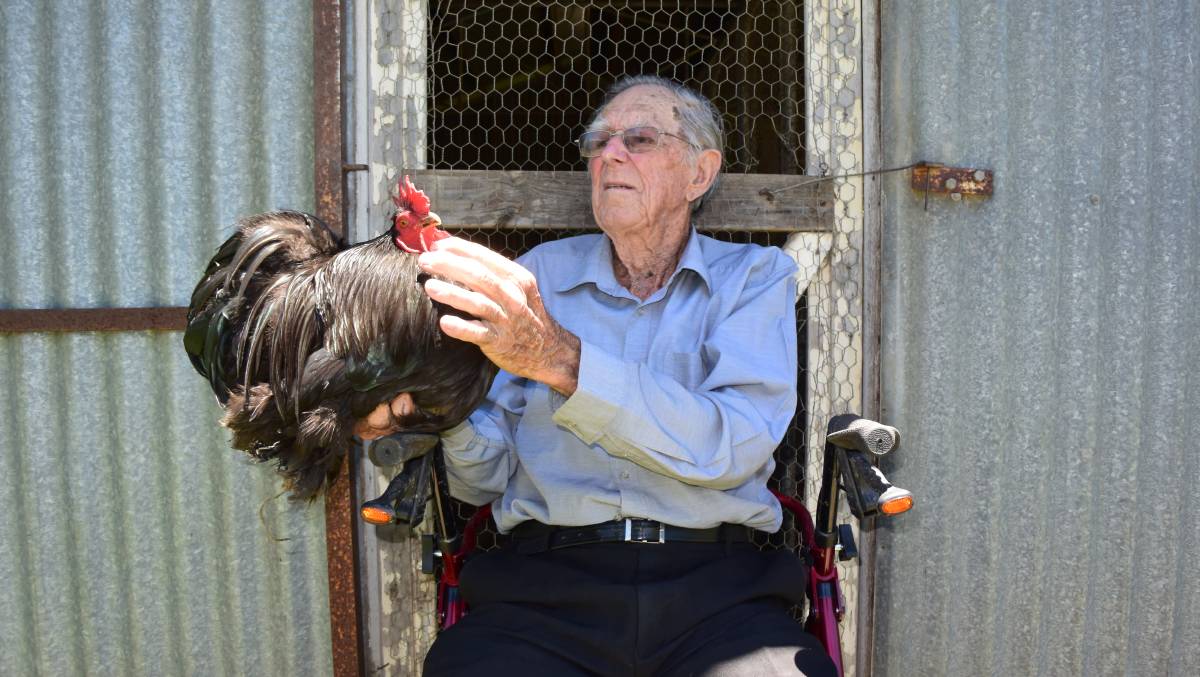 Ray Connors with a Pekin rooster. The veteran breeder's game fowl days are finished though their memories linger brightly.

For seven decades of his 94 years Ray Connors has been breeding Old English game fowls with wife Gertrude by his side.

Energetic as the pair appear they both admit the intense preparation for their last show ‘ever’ –  the 50th anniversary of the Lismore-based Far North Coast Game Club –  took a great toll on old frames. Perhaps it’s time to give the game away?

Life has been fairly regular for Ray, in particular, who grew up next door on the Lower Clarence levy at Cowper. Part of an extended dairy family he took over the milking at 13, after his father Sam did himself an injury.

Later in life Ray had the opportunity to play representative cricket but couldn’t leave the necessary work. Instead he contented himself as captain of the nearby Tyndale eleven, taking the game to Grafton to show those city boys what for.

From his earliest age Ray learned a sense of stock. First it was handling chickens and then, as he grew older, it was with the poddy calves –  letting them suckle his fingers after milking. Stock sense and breeding was part of the family business and it wasn’t long before Ray was showing his favourite poultry at the local shows.

Those early dairying days were more than just routine. There was the mustering on horseback of dry cows on the coast near The Sandon. “You might see a goana jumping,” Ray recalled. “You’d come back relaxed. I was a nature man all my life. I love the land.”

There were memorable floods, which lapped at the top step to the house and inundated the sheds. One bad one during the 1960s caught his pigs by surprise and all but one  survived after floating downstream – the stud boar that didn’t actually survived the swim but was trucked to the abattoir before anyone could claim him!

Like a calendar throughout the year, Ray’s passion for Old English Game fowl was a constant and his interest in breed standards soon won him a place on the judging panel. Today he has 60 medallions marking time as Royal judge at shows all over Australia.

A fancy for game fowls took flight the year he and Gert built their new home, 1947, squeezed as it was between the Pacific Highway and the South Arm of the river.

Back in the day, when river traffic was far greater than the road, the pair transported their show birds in fine style –  aboard the cream boat to Brushgrove wharf and from thence to Maclean by passenger steamship. There they loaded the caged birds in the back of a spring cart and flicked the reins so a horse would take them one final half-mile to the poultry pavilion.

Other than that much has stayed the same. There remains the incredible preparation and the thrill in victory.

Shows provided excellent feedback and, unlike today, they extended over a long weekend so breeders had time to absorb each other’s knowledge. Birds were exchanged and as one they advanced the cause.

“If you made too many mistakes too often you were a slow learner,” recalled Ray. “When you were beaten you corrected your breeding. You might find a bird that was not be best bred but he had a bit of what you were looking for and away you went.” Lismore’s 50th was especially sweet, as Ray’s bird was awarded Grand Champion of the show and he said the win was every bit as good as taking out Lismore Show’s 100th anniversary poultry prize.

“Not even a win at a Royal show can top the 100th anniversary prize,” Ray recalled. “Lismore, along with Maclean, always had a reputation at one stage of being the best of the country shows.”

It didn’t hurt that Ray’s cousin at nearby Tyndale, Ian Benson was a top poultry judge and a rivalry certainly progressed the breed.

Royal show wins were a celebration and worth the hours of getting birds fit. Of course timing was critical.

One Sydney Royal Ray was awarded Grand Champion in both soft and hard feather along with male reserve. Ten days later an English judge came to inspect and declared Ray’s champion bird ‘just as fit’ as it had been at the show.

These days ‘fit’ is not a word Ray uses to describe himself, although the casual onlooker would disagree. He keeps himself invigorated with country remedies like molasses and cider vinegar – all of which he feeds to his show poultry and cattle. “With molasses they shine up,” he observes. “You should see what it can do. Cidar vinegar reduces inflammation and after that the body will heal itself. I put vinegar and garlic in the fowl water and I use it on myself.”

Despite the preventative measures Ray and Gert’s strength is failing and game birds are too flighty for an old gentleman and his wife. “They fly into trees and the foxes get them,” he says.

Pekin– the ‘aristocrats of the bantam world’ – are much easier to look after and give both Ray and Gert a lasting pleasure. After all that is what stock sense is all about.

If you are interested you will do well. If you enjoy it you will be successful. - Ray Connors