A kangaroo is undisturbed as it fights for life at a water trough on "Langawirra Station", near Broken Hill. The Western Division is witnessing a mass kangaroo dying event. Photos by Rachael Webb.

A mass dying event of kangaroos is unfolding in western NSW as failed kangaroo management strategies have created an animal cruelty crisis.

Landholders and  vets have reported “significant numbers” of kangaroos are dying close to the South Australian border, with some female kangaroos so poor in condition they have ejected joeys from their pouches to survive. The wave of mass deaths is expected to move east as the hot, dry summer continues in western NSW.

The mass dying event - not unknown after large build-ups of kangaroos following a good year - comes as the Office of Environment and Heritage (OEH) confirmed yesterday that the commercial kangaroo harvest quota would not change for 2018, and in fact be reduced by almost 500,000, a report saying this was because populations of red kangaroos and eastern greys had decreased from 2016 to 2017 on the western plains.

But western landholders, including the Pastoralists’ Association of West Darling (PAWD) have said that despite a fall in the kangaroo population from 2016 to 2017, they are dealing with high kangaroo numbers since the good seasons of 2010-11, and that commercial  harvesting is doing little to control them. Kangaroos fighting for life in the hot, dry summer mass near a fence as stock is rounded up at "Langawirra". Farmers say it is an animal cruelty crisis.

Environment Minister Gabrielle Upton, who oversees kangaroo harvesting, is sitting on a recommendation to increase the number of kangaroo harvest processor licences. OEH has expressions of interest from potential Fauna Dealer Wholesalers, who currently cannot obtain a licence to operate in NSW  (currently capped at 11 licences held by seven companies) to help meet quotas.

The harvest quota - about 15 per cent of the kangaroo population is never met, failing by nearly 90 per cent in recent years. Landholders say they can do little to dent the population with shoot and let lie tags (normally only allowed 250 tags at a time). Also the number of harvesters has declined dramatically from seven years ago from 900 to 380 last year (slightly up from 2016). A male bias in the quotas means shooters are shooting almost 95 per cent males (for red kangaroos) to meet carcase weight requirements. It is the biggest landholding issue confronting the more than 2000 farmers in the Western Division as they increasingly consider exclusion fences to stop kangaroos eating paddocks bare.

The kangaroo pressure has created “deeper and longer droughts”, according to Lachlan Gall, “Langawirra Station”, president of  PAWD. He is appalled to see so many kangaroos dying.

Mr Gall said the fall from 17.4 million kangaroos in 2016 to 14.4 million in 2017, was “coming off an all-time high”.  He said many graziers were seeing kangaroos die as a result of the prevailing dry conditions, so a reduction in numbers was to be expected. “There is a critical animal welfare issue here to be addressed.” he said.  PAWD and other stakeholders had warned that a major die off event, associated with animal welfare concerns for kangaroos and associated environmental damage, has been coming for a number of years, but government has been slow to act in response to the looming issue. The number of kangaroos was unsustainably high.

“Kangaroos have descended on any available pastures and destroyed them in a futile bid to survive.” 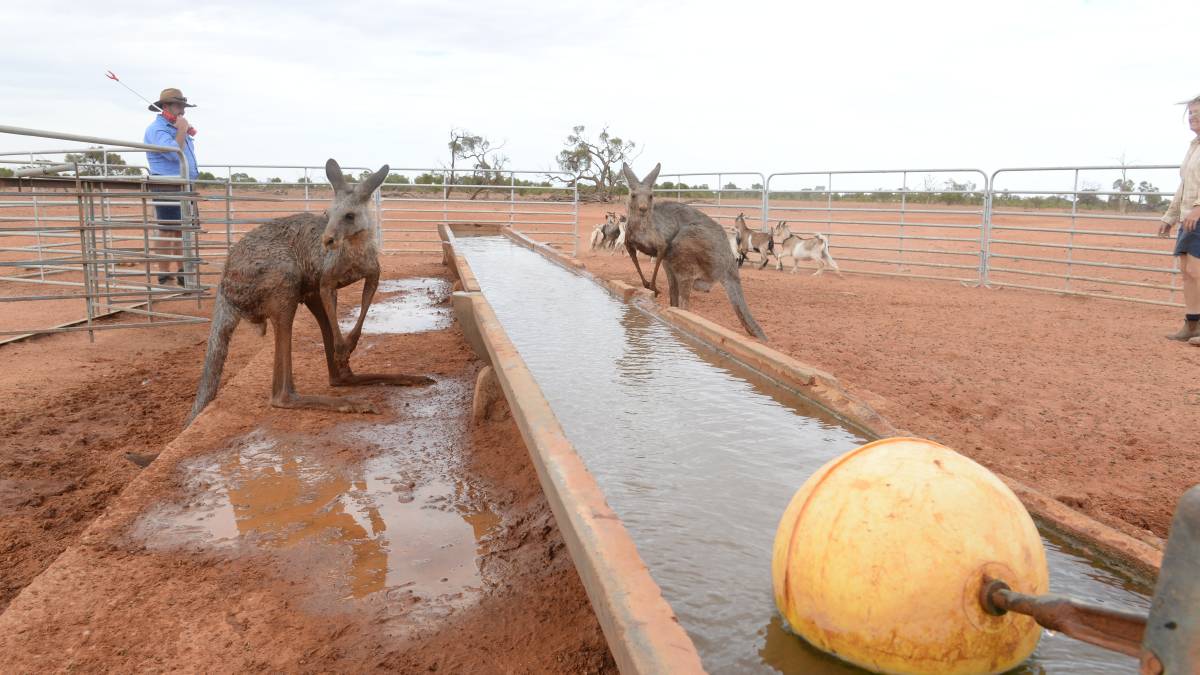 “By some estimates, kangaroos make up 50pc of the total grazing pressure in western NSW,” Mr Gall said.

“There is no incentive to stock conservatively or save paddocks for dry times, as kangaroos invariably move in and eat what pasture is available. There appears to be little  interest or knowledge of the extreme animal cruelty and poor animal welfare outcomes for kangaroos caught up in drought outside the rural community.

“I feel that activists and their supporters are complicit in contributing to the extreme suffering that kangaroos experience due to drought, not to mention the damage they do to their (and other animals’) habitat in an ultimately futile bid to survive.  The owners of kangaroos (the Crown), and the decision makers must also bear responsibility for their welfare.

“Many pastoralists are satisfied with the level of kangaroo control delivered by full utilisation of the commercial quota, but the actual harvest as a percentage of the quota has been in the vicinity of only 10-15%  (or 2-3% of the population) over the past several years.  It would be ideal if the commercial industry could quickly move to a position where the quota is fully taken, as the commercial harvest is broadly accepted as the best way to deal with excessive numbers.

“The take home message for domestic and international consumers is that purchasing kangaroo products supports the wellbeing of kangaroos as a species and looks after the environment by reducing unsustainably high numbers.  The cruelty inflicted on kangaroos by Mother Nature is particularly distressing to see up close, and it is pretty much only landholders that get to experience this. 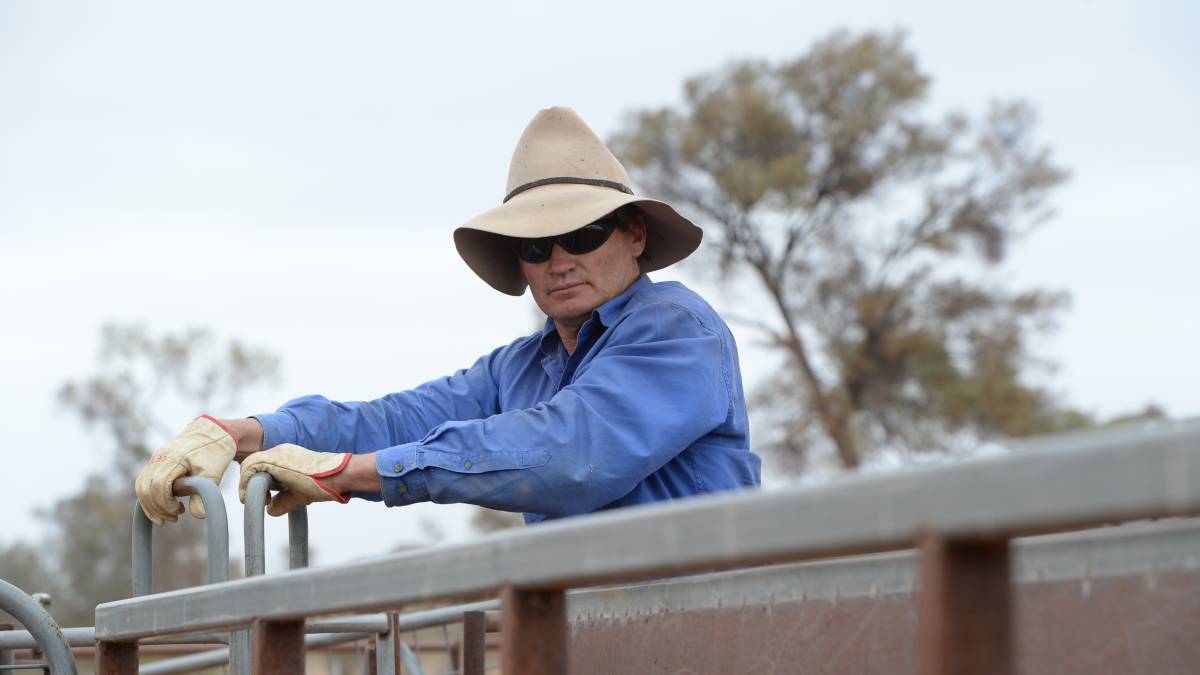 Broken Hill grazier Lachlan Gall says it is distressing to see abandoned joeys in the paddock, after their mums discarded them due to the hot and dry summer and lack of food.

“There appears to be little to no interest or knowledge of the extreme animal cruelty and poor animal welfare outcomes for kangaroos caught up in drought conditions outside the rural community, and this situation has got to change.  It seems inconceivable that anyone would accept the death of millions of kangaroos during drought as a satisfactory control method, but this is the reality of kangaroo management in Australia.  We have been warning that another die off event was inevitable as drought conditions invariably returned, but no one wanted to listen.  The concept that harvesting kangaroos is indeed the most compassionate and ethical thing we can do for them continually falls on deaf ears. Kangaroos have lay down and died in their tens of thousands through lack of water and feed in the Western Division of NSW.

“The irony is that the dying kangaroo under a spindly mulga tree on a 43 degree day in a paddock that was destocked three months ago could previously have had an instant, pain free death and had economic value, but I am breaking the law if I don’t have a “drop” (non-commercial) tag with me and shoot it at point blank range with a .222 or larger calibre rifle.  Most of the time I don’t have a drop tag or my .222 with me, and even if I did, shooting a roo at point blank range with a .222 is literally “overkill” and not particularly safe.  So what do I do?  Shake my head and walk away, leaving that animal to die a slow death?

“The point must be made that landholders don’t want to see kangaroos disappear entirely from the landscape, they just want numbers reduced to a sustainable level.  Euros are common in western areas, and increasing their range (as are Eastern Greys), but I do know a landholder who has only a few Euros on his property and doesn’t want them harmed.  There is a small population of the endangered Yellow Footed Rock Wallaby on NPWS managed reserve and private property between Broken Hill and White Cliffs, and our local Landcare group would be thrilled to see this species increase in number and move into new areas.  Ironically, there is a belief that one of the key threats to the Yellow Foots is competition from other species of much more abundant kangaroos.”

Geoff Wise, a former regional director for the Far West Department of Land and Water Conservation, and a Department of Agriculture vet with vast experience in the western division, said an animal welfare crisis was unfolding with “significant numbers” of kangaroos dying.

“Despite deaths from roadkill or starvation or disease, what is happening is a massive animal welfare concern,” Mr Wise said.

“And I think graziers feel so helpless in just watching that happen from an animal welfare point of view. They are damned if they do something (shoot a kangaroo to put it out of its misery) and damned if they don’t. To me its the landholders who seem to be the only ones who are expressing their concern about animal welfare issues, everyone else puts it in the too hard basket.”

Meanwhile, the NSW Office of Environment and Heritage (OEH) says kangaroo quotas are  “sustainable” for the long-term and has slashed the commercial harvest quota by almost 500,000 for this year.

“These proportions are specified in the plan, and any proposal to set a commercial harvest quota above these rates requires specific approval from the Commonwealth,” the OEH said in its 2018 management plan, released this week.

“In light of the population dynamics of red and grey kangaroos and wallaroos and the male bias of the commercial take, quotas set at these levels are considered sustainable in the long term for kangaroo populations. More than 20 years of available data indicate that kangaroo populations harvested at these rates continue to fluctuate primarily in response to seasonal conditions.

“As the quota is based on harvesting a proportion of the estimated population, changes in populations are reflected in the quotas. As such, the quotas for 2018 are still considered to be sustainable in the long-term.”

The report says red kangaroo populations in the Far West “change more rapidly”.  In 2003, there were estimated to be about 2.34 million red kangaroos, compared to 5.13m last year. The population of eastern greys has declined from 3.83m in 2003 to 2.94m last year (est). “Harvester returns for 2016 indicated that 96.7pc of red kangaroos taken were males. Harvester returns for 2016 indicate that 90.4pc of eastern grey kangaroos taken were males. For 2018, OEH does not propose to set quotas that are higher than those specified in the plan.”