Reiland principal Mark Lucas said the opening run of cows and calves from Taranee were a credit to the vendor, Glenn Lucas, considering the season.

Selling agents Landmark Wagga and Elders Tumut and Gundagai yarded 840 cattle for the Reiland blood female fixture at the Gundagai saleyards on February 21.

Mixed age cows, pregnancy tested for a spring calving, and with calves at foot, sold for $1850-$2800 while depastured mixed age cows and their calves made $2400.

Heifers, 2.5 years, pregnancy tested for a spring calving, and with calves at foot sold for $2200.

Vendors Matthew and Janice Reynolds, Mt Hugel Pty Ltd, Grahamstown, topped the sale at $2800 with a pen of 24 Reiland blood cows, three to four years, with calves aged three to four months, and PTIC for a spring calving. 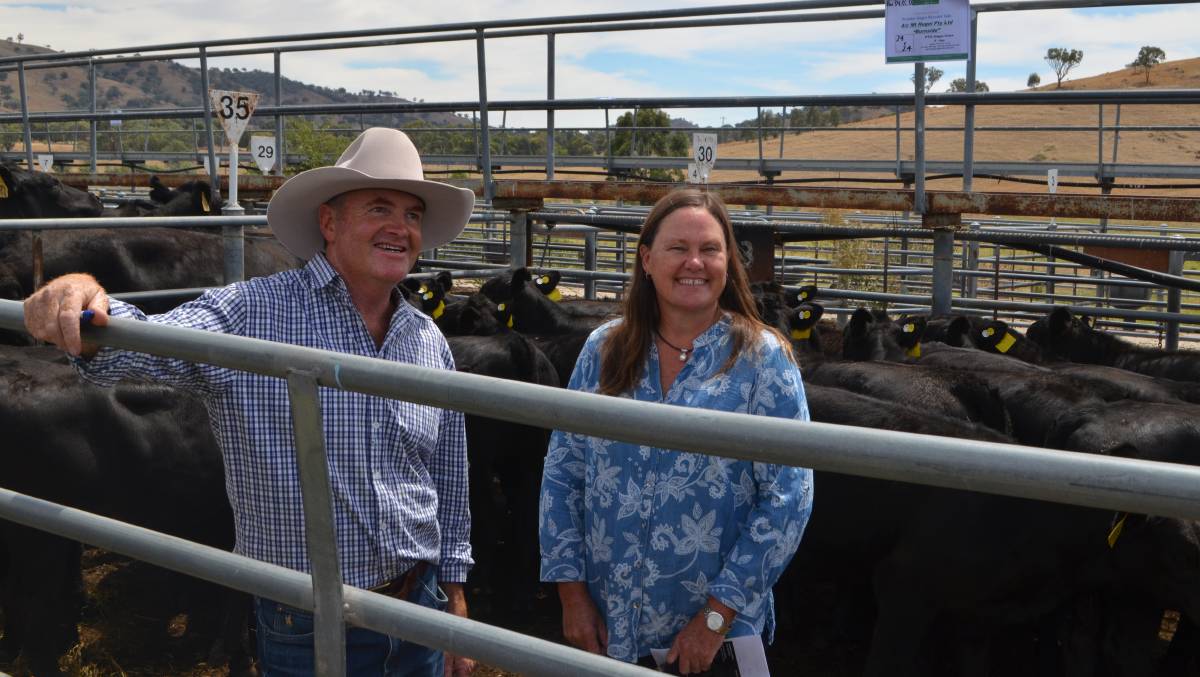 Matthew and Janice Reynolds, Mt Hugel, Grahamstown, sold the top price pen of PTIC cows, 3-4 years, and their calves, for $2800 at the Premier sale.

The pen was snapped up by Denise McMurtrie and Robert Hartwig, Wagga, and equalled the top price paid at the red hot Wodonga Beef Breeds female sale in January.

“We have sold cattle and are restocking – they were the youngest cows in the sale and were a three-in-one unit,’’ Denise said.

“These calves will be grown out and sold. The quality of the stock on offer was excellent today.’’

Matthew Reynolds had supported the on-property sale at Reiland’s Killimicat station in the past and was among vendors to step forward to support the new female sale.

He estimated the calves in the top price pen at 180kg liveweight.

“Our PTIC heifers made $1250-$1325 today – Mark Lucas had classed the heifers and these were the later calving ones,’’ Mr Reynolds said.

“The sale was quite strong and certainly exceeded our expectations as we had been hoping for $2400-$2500.’’

Opening the sale was the dispersal of seven-year-old cows, PTIC for a spring calving, and their calves, five to six months, offered by Glenn Lucas, Taranee Pastoral Company, Oberne Creek. 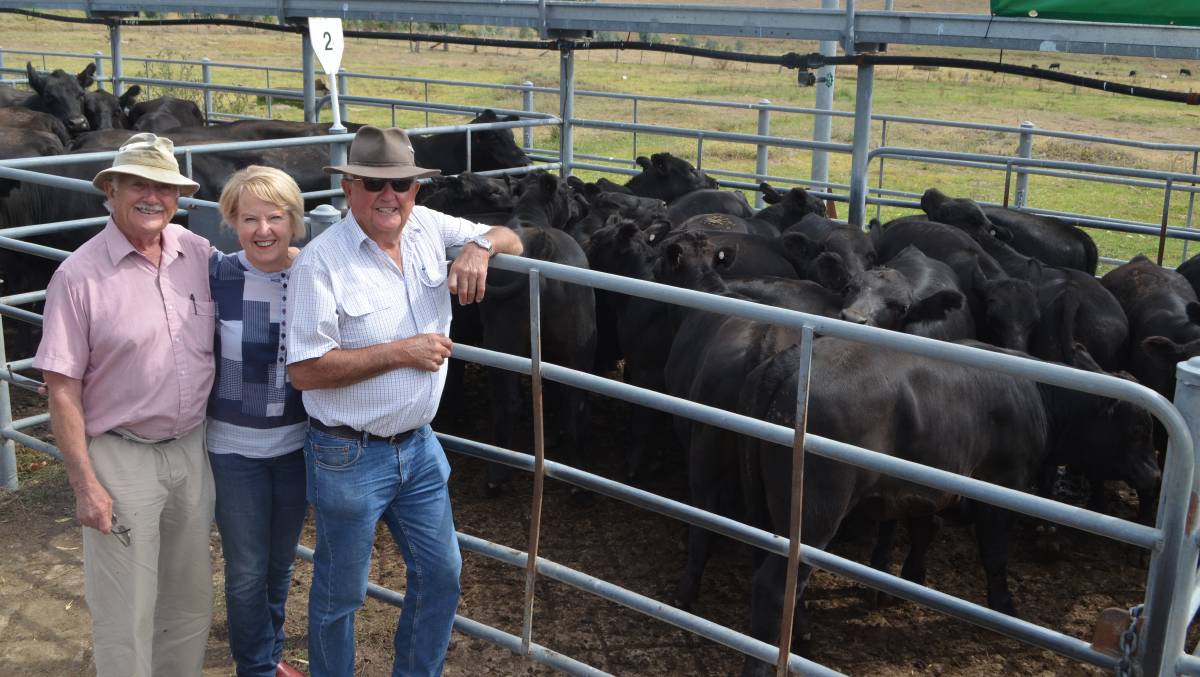 Murray Shaw, new owner of Abingdon Station, Nangus, was quick off the mark to pay $2500 for the opening pen which was drafted with steer calves at foot.

Mr Shaw outlaid $2450 for the Taranee seconds and $2350 for the tops of the Reiland Angus draft of spring calving cows, five to six years, with July/August drop calves.

He bought a total of 91 cows to increase herd numbers on Abingdon Station and remarked on the quality being evident right through the sale. Tim McKean, Elders Wagga, with clients Lee and Murray Shaw, Abingdon Station, Nangus, bought 91 spring calving cows, with their calves, to a top of $2500 at the Premier sale. Photo: supplied

His agent, Tim McKean, Elders Wagga, quoted the prices as being on par with other breeder sales.

“The calves bought on these cows todays will be offered at the Abingdon Station on-property sale in the first week of June – there will be 1000 head on offer in total,’’ Mr McKean said.

Vendor Glenn Lucas said his opening pen of seven-year-old cows and their steer calves had sold above expectations.

“The way they were drafted had a big effect with the first pen having 18 steer calves - even the cows with the heifer calves sold well,’’ he said.

“The steers were around 250kg.

“I thought the PTIC heifers got a little tough with some down to $1100, which would have been fat prices, but the cows and calves sold very well.

“It was a beautiful yarding of cattle and was a credit to Mark Lucas and his clients.

“I hope it becomes an annual event and I will keep a few females aside for the next sale.’’

Reiland Angus topped the PTIC heifers on $1900 with 17-month-old females AIed to Kidman Impact K99 and Landfall Reality L76 for an August calving.

Reiland principal Mark Lucas said the opening run of cows and calves from Taranee were a credit to the vendor, Glenn Lucas, considering the season.

“It was good to see a reinvestment in the Gundgai district by Abingdon Station after its purchase by a Riverina family,’’ Mr Lucas said.

“In the autumn calvers, with the signature cattle of Edward Proudford’s, you wouldn’t see better cattle in the country.

“The heifers were a little softer as buyers took into account their growth requirements.

“We bought a new product to the market – normally preg tested spring calvers aren’t sold until May and they have been offered three months earlier.

“The overall sale was spectacular – given it was a first-up, it was a quality appreciation sale.

“There weren’t any pens that would have not done justice in any top rating herd.’’

Mr Lucas said rain in northern Australia leading into the sale may have pushed prices on the spring calving heifers.

“However, the sale demonstrated people were willing to bid on a quality article and spend that little bit extra.’’