Goats, not kangaroos the gold in far west for harvesting

He’s probably the biggest kangaroo shooter by numbers in Australia, but making ends meet in this industry is almost impossible.

Shaun Mills operates out of Packsaddle in western NSW, but at the end of the day he’s a low-income earner although he’s at the top of his game. He shoots about 7500 kangaroos a year, when the industry average per shooter is about 5000 roos. It’s a hard, lonely life and he says he does it because he loves being out in the bush. But it’s hardly rewarding.

The low returns point to why so many shooters have left the $200m-a-year kangaroo meat industry and why no one wants to take harvesting up. The number of NSW commercial kangaroo harvesters has declined dramatically from seven years ago from approximately 900 to 380 last year (slightly up from 2016). And it’s no wonder why.

At the moment Mr Mills gets 70 cents a kilo for his kangaroo carcase, which must be male and weigh over 15kg. He reckons if he got $1 a kilo then it would be a good living. His pay each year ends up at about $53,000 before tax, and then he has all the costs of tags ($1.17 each in NSW), harvest licence (about $900), petrol, guns and bullets. Because only male kangaroos can be shot he has to move further and for longer to get his quarry. It’s no wonder the kangaroo harvest quota is never met (the quota is about 15 per cent of the kangaroo population, failing by nearly 90 per cent most years).

“The biggest problem is there is no money in it,” Mr Mills said. “You can barely make a living.”

“No young blokes want to be in it, they don’t like sitting out in bush camps with no phone service, no toilets and living pretty rough.

“Before we could harvest females and males, but now it is only bucks which forces us to travel further. Sometimes I have to go 140km from camp to find males.”

All of this is done while he sees thousands of female kangaroos dying in dry creek beds and under trees from the heat and dry.

The kangaroos have done it tough the last three months in the far west and it’s hard to find ones worth shooting. “Some are very poor at the moment,” Mills says. The red kangaroos he harvests are sold as Paroo kangaroo and are the top line of kangaroo eating. 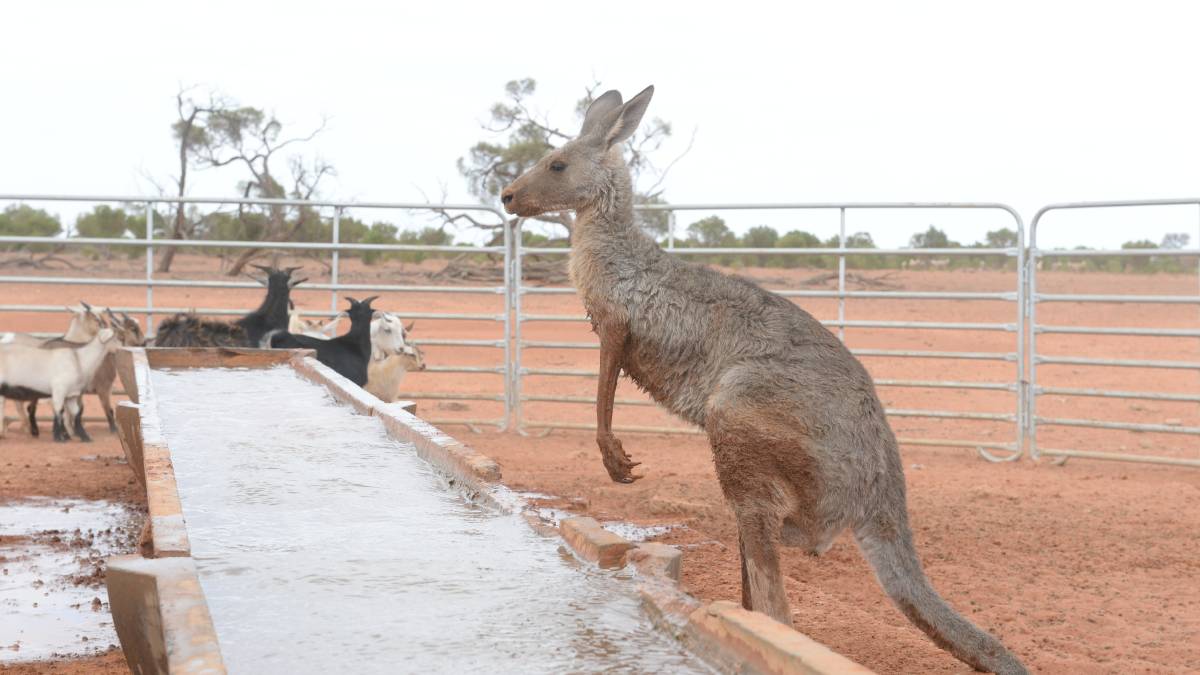 Drought-stricken kangaroos in western NSW have been dying in their thousands in a mass dying event.

The carcases go to a chiller at Packsaddle and are then transported to Macro Meats base in Adelaide, South Australia.

The Pastoralists’ Association of West Darling (PAWD) has called for the removal of a ban on skin-only shooting in NSW in a bid to help control kangaroo numbers.

But it  has praised the NSW Government for recently lifting the cap on kangaroo processor licences.

Mr Gall said large numbers of kangaroos were now dying as a direct consequence of prevailing drought conditions.  “Pastoralists are dealing with kangaroos bogged in drying dams, in some instances these are domestic water supplies, and carcasses have to be removed before they putrefy.

“PAWD welcomes the recent decision to abandon the cap on kangaroo processor licences in NSW.  PAWD has consistently called for the removal of a ban on skin-only shooting in NSW that was implemented in 1996.  There is no reason why NSW should not follow other states in permitting skin-only harvesting, especially when the commercial harvest has only taken 10-15 per cent of the available commercial harvest quota (or 2pc of the population) in recent years.

“PAWD has consistently called for the removal of a ban on skin-only shooting in NSW that was implemented in 1996.  As is the case for all agricultural commodities, the value of kangaroo products rises and falls, and the current depressed state of the kangaroo skin market is well known.  However, there will be times when it will be worthwhile for harvesters to shoot for skins if they cannot sell whole carcases, as an alternative to non-commercial culling.

“Skin-only shooting is a viable alternative for remote areas in the state where it is impractical to locate and service a chiller for full carcases, or when roos are affected by drought and in poor condition.

“It is correct to say that harvesters are barely making more than basic wages.

“Roo prices have flatlined for 20 years, whilst goat prices, unencumbered by the attention of activists and unnecessary red tape, rose from similar levels to a peak ten times the value of kangaroos when goat prices peaked last July.

“Kangaroos are widely dispersed over public and private land.  They are afforded protection from harvesting on public land (eg: National Parks), but on privately owned agricultural land they are in effect farmed.

“We provide food, water, shelter and safety from predators, something they don't get elsewhere, either in full or in part.  This is a service we provide to the community at no charge, whilst absorbing the costs incurred in terms of impact on feed, water and infrastructure.

“As a result of our husbandry, kangaroo numbers on agricultural land build up, much like domestic livestock numbers do.  Periodically, we dispose of our livestock so that excessive numbers are not damaging the environment or dying because they have run out of feed and/or water.

“Likewise, the same happens for kangaroos when they are harvested for the commercial industry.  Sheep, cattle and goats are sold in saleyards trucked to abattoirs for processing, but first stage processing for kangaroos occurs on farm because they cannot be mustered or trucked, with second stage processing and food safety inspection occurring in abattoirs.

“Pastoralists do not receive any income from the sale of kangaroos harvested on their properties.  Strong government regulations prevent harvesters from removing too many kangaroos from agricultural land to ensure continued viability of the species, however droughts periodically come along and kill many more kangaroos than farmers and graziers are ever allowed to.

“There are a number of stakeholders involved in marketing, although the bulk of their efforts is counteracting the lies and misinformation peddled by activists and absorbed by consumers who are not inclined to question what is served up to them.”

A documentary, Kangaroo. premiered in Australia in Sydney this week, with the producer declaring Australians would be shocked at the treatment of  the national icon.