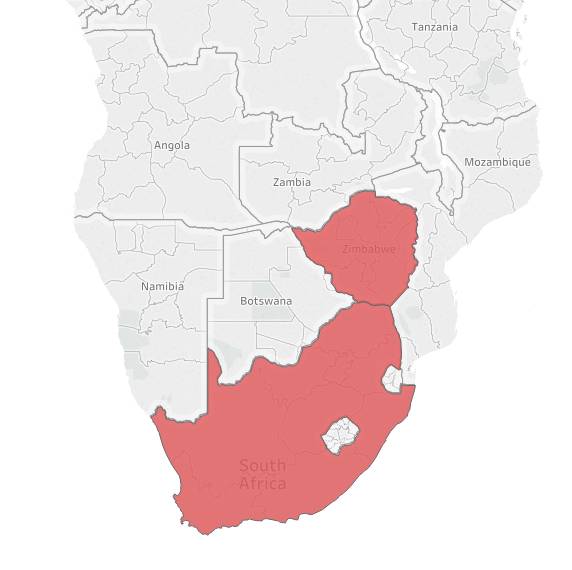 “……not calling for the slaughter of white people‚ at least for now”, South African MP.

THIS is an astonishing comment from a leading South African politician.

If you have been following the news in recent days, you would likely be aware of the deteriorating situation facing South African farmers.

So far there have been 15 murders and 109 attacks.

What is going on, what is likely to be the impact of these actions, and should they learn some lessons from Zimbabwe?

SA has long been considered one of the most stable countries on the African continent, and it looks like that is coming to an abrupt end.

The SA parliament voted in February (241 to 83), to amend the constitution to allow the government to remove white farmers from the land without any form of compensation.

This is obviously worrying for farmers, who have been legally running their businesses for decades on family owned properties.

Enacting this law has the potential to give legitimacy to vigilante groups attacking farms.

It has to be noted that 72pc of all land in South Africa is owned by white people; therefore expelling these farmers would likely have a big impact on the productivity of food production and the economy of the country.

The expression ‘Those who do not learn from history are doomed to repeat it’ seems to be very apt in this case.

As we can see in the map above, Zimbabwe adjoins South Africa, and a similar situation has occurred there.

In the early 2000’s, the Mugabe regime forcibly removed white farmers from the land.

It therefore makes an excellent case study to determine whether the land grab will be positive or negative for the people of South Africa.

The first place to examine is crop production and yields are an appropriate area to investigate.

In figure 1 and 2 the annual average yields for corn and wheat are displayed. 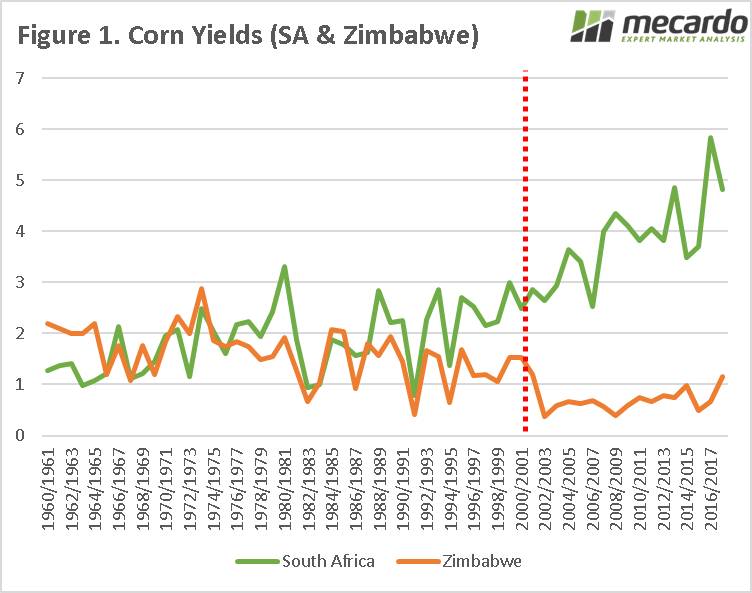 On these charts, the red vertical bar signifies when the white farmers were forced off the land and in both cases, we see that yields have almost immediately dropped off in Zimbabwe (and never recovered), whereas SA yields have continued improving. 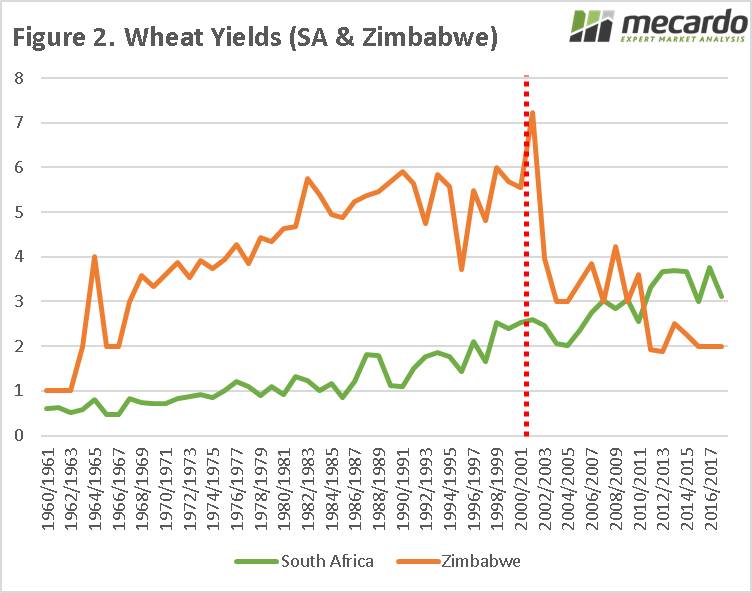 Global crop yields have progressively increased as farming practices and technology improves, however, it seems that Zimbabwe has bucked the trend.

In figure 3 and 4, the net export position is displayed (exports – imports) for corn and wheat. 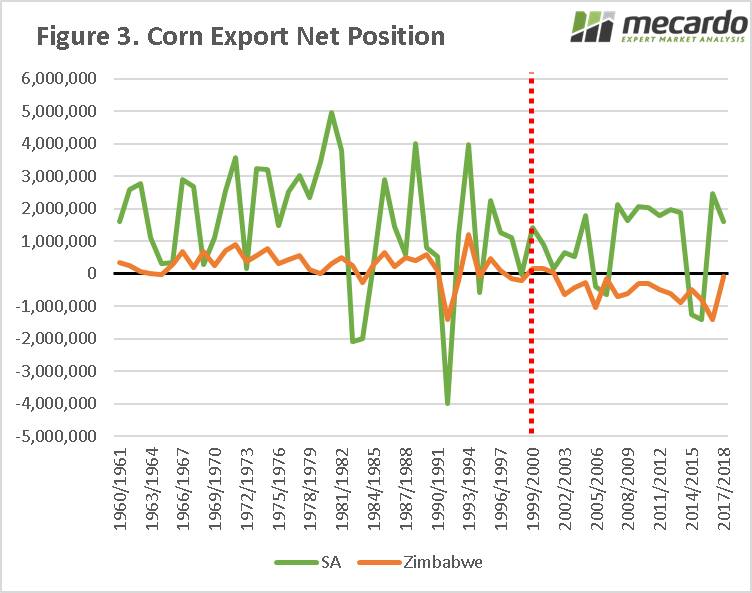 Prior to 2000, Zimbabwe and SA were regular corn exporters.

After the land grab, South Africa continued to regularly export, whereas Zimbabwe has never produced a surplus for export. 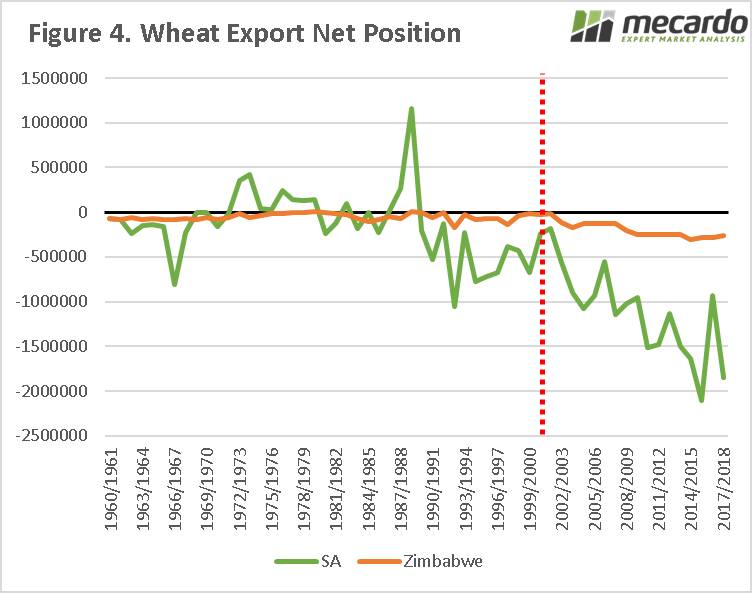 It has to be noted however that both countries have dramatically increased their reliance on wheat imports, which in reality provides an opportunity for Australian wheat through increased demand.

Since 2000, there has also been a dramatic increase in the population in both of these countries (figure 5).

This places additional risk on the SA population, as any disruption in productive capacity will have a dramatic impact on food security.

If history repeats itself then South Africa could be in for some very hard times.

It is unlikely that farmers would willingly leave their properties with all equipment intact (sugar in the gas tanks?) and farming experience would be lost to the country, resulting in lost production. 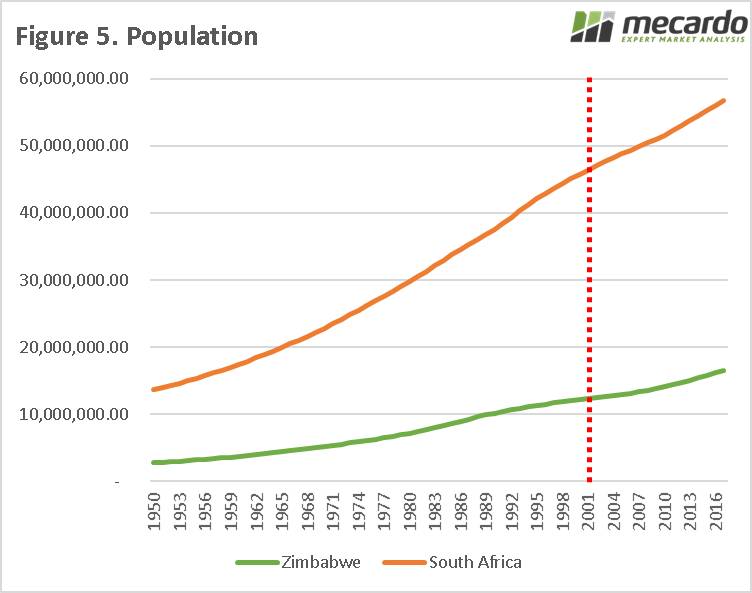 The agricultural industry in Zimbabwe is yet to recover after nearly two decades and recently they have invited the farmers to return.

There is also the added risk that South Africa will be considered a pariah, and unattractive to foreign investment and trade.

If this trade damage were to occur this would exacerbate food security issues, as increased food imports are required.

The South African government need to ask themselves, ‘In the long term is this good for our country’ and is this action in keeping with the vision of Nelson Mandela?