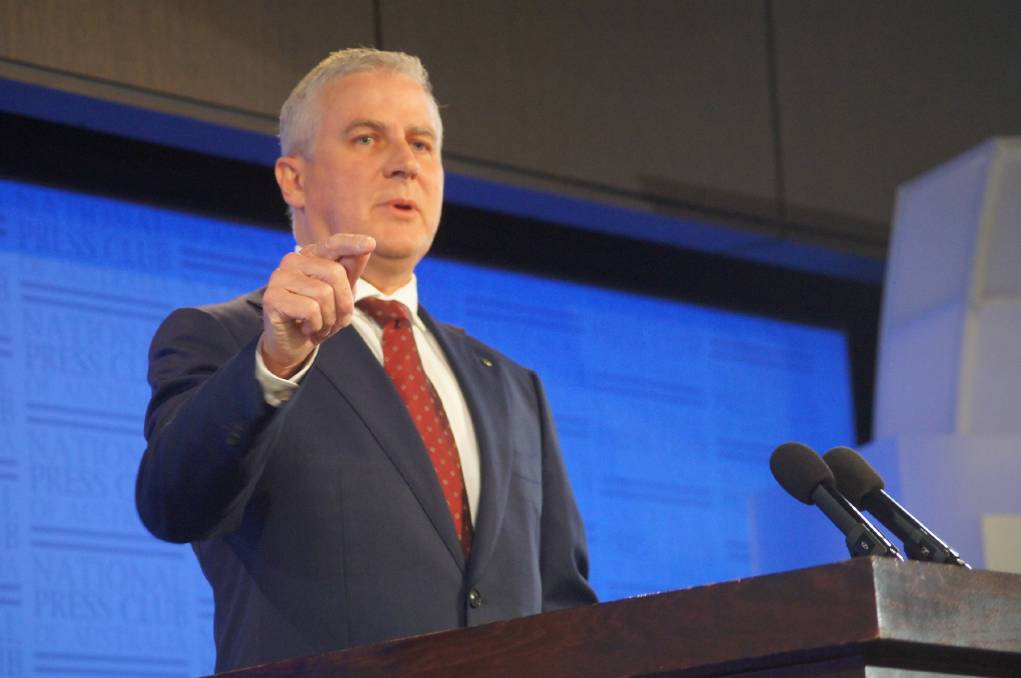 Michael McCormack says live animal exporters are ‘very much on notice’ and any that transgress in future should be stripped of their export licenses.

ACTING Prime Minister Michael McCormack says live animal exporters are ‘very much on notice’ and any that transgress in future should be stripped of their export licenses.

But in his first major political address at the National Press Club in Canberra as Nationals leader, Mr McCormack rejected calls for a total ban on live exports in response to the latest animal welfare controversy involving sheep shipments to the Middle East, from WA.

The Deputy Prime Minister touched regularly on agricultural and farming themes and related major government investments in his rural focussed talk, like the inland rail; rejecting criticism it was a rural-centric project.

But he also addressed the most topical farming news-story concerning welfare standards for live sheep exports – ignited by video footage taken from Middle Eastern bound shipments that appeared on 60 Minutes recently – saying it was “a major issue”.

“Certainly the images, the footage from that ship of shame were disturbing - they were appalling for everybody who saw them,” he said.

“Only Australia has an export supply chain assurance system so that animal welfare from paddock to plate is looked at, is observed, is monitored,” he said.

“Should we give up the live animal trade, that trade will be filled by countries who do not place animal welfare first and foremost in their exporting, and that will be a great shame and a great detriment certainly to animal welfare standards around the world.

“David Littleproud, the Agriculture Minister, has certainly been straight out on the front foot.

“He's even called his own department out and wants an inquiry into why he wasn't informed sooner and other aspects of this appalling story.

“I know and I have ever faith in David Littleproud that he will follow through with what he says, and we want animal welfare standards to be front and centre of all export opportunities, all export marketing, and we will make sure that happens.

“(But) I don't believe that we should ban the trade holus-bolus.”

Mr McCormack cited some examples to back his view, saying those critics who say a live export ban would have no impacts on domestic markets, “are wrong”.

“I know when the trade was shut down in June 2011, as a knee-jerk reaction to a television program by the Gillard government, the price of cattle at Wagga Wagga dropped because there was an irrational fear that all the long-haul cattle from Queensland was going to move into the southern markets,” he said.

Mr McCormack said a business in his home town also had orders for crates and cattle crushes that “dropped” and they had to lay off welders, because the orders stopped with the live animal export trade.

He said a lot of Aboriginal stockmen were also put out of work and they still haven't regained work from that “knee-jerk reaction all those years ago”.

“I'm sure that the work that David Littleproud, the Agriculture Minister, is going to do will put on notice any exporter so that if they transgress in future, they'll have their licence taken away from them,” he said.

“That is what should happen.

Asked if he had a different view on the future of the live sheep trade rather than the cattle trade, Mr McCormack said “I do believe in live animal export, whether it's sheep, whether it's cattle, whatever”.

“I do believe in it and I believe there is a future for it - not just for our farmers, but also for our nation,” he said.

“It brings export dollars into this country.

“It creates jobs, it creates opportunities.

“I say again - we are the only nation on earth with that supply chain export assurance system in place so that animal welfare is placed as a priority from farm-gate to plate and that is a good thing.”

Mr McCormack said an inquiry that’s being conducted by Mr Littleproud into live export shipping standards during the Middle Eastern summer, in relation to heat stress related welfare issues, would be “a multifaceted inquiry”.

Mr McCormack was also asked - in his capacity as Infrastructure and Transport Minister - if he would use his powers to ban old ships being used for live exports that have been re-fitted and force the trade to use ships that are purpose built and designed for livestock transport.

“We will see what comes as a result of David Littleproud's intervention,” he replied.

“We will see what recommendations are made and we'll act accordingly.”