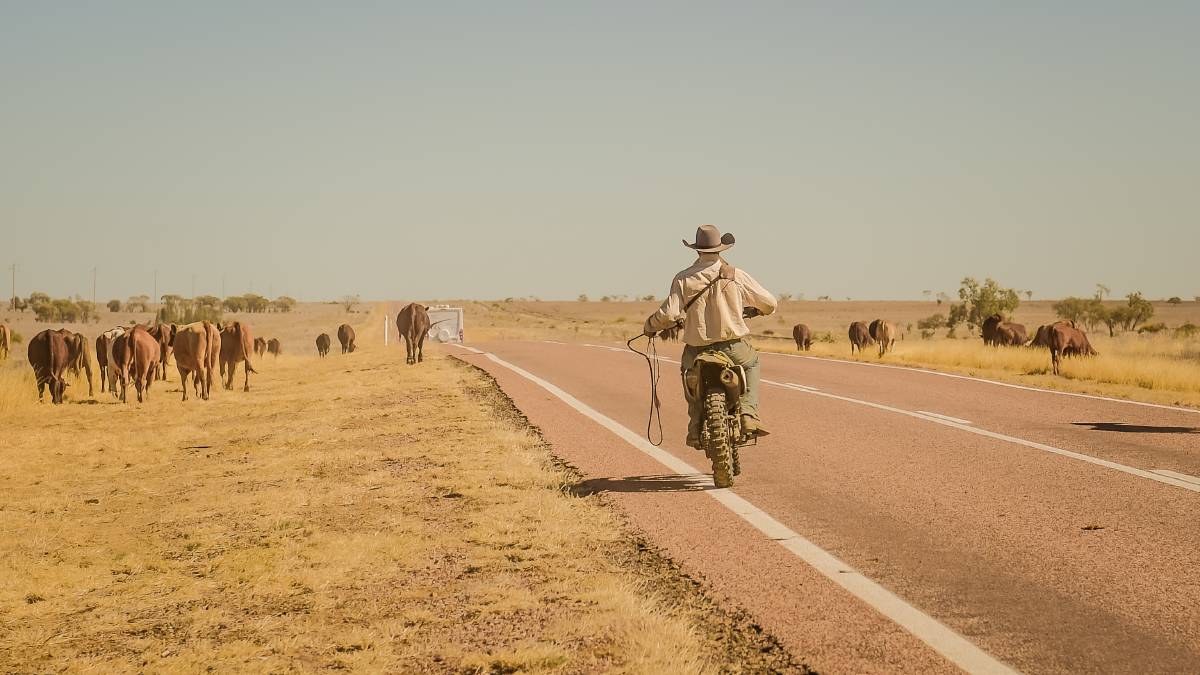 Long road ahead: Ned Elmy said the best feed for the mob had been between Augathella and Tambo but the pickings were fairly slim on the country they’d just walked over, west of Barcaldine. Photos: Kelly Butterworth.

After eight months on the stock routes, PJ Elliott's cattle have turned for home at Corfield, desperately hoping for an early break to the season.

When Jodie Muntelwit and PJ Elliott decided to put 1200 head of their cattle on the road last October, they imagined it would only be for a month or two.

Eight months later, the mob of mostly weaners, under the care of Ned Elmy, an offsider and Ned’s 18 dogs, is trudging towards home at Corfield, living on hope and whatever Queensland’s stock routes can offer.

The season didn’t give PJ and Jodie the break they’d hoped for on their country north of Winton last summer, and the 150mm single fall in March at Weeba and Enryb Downs brought a half-hearted pasture response from most of their paddocks.

“A paddock on each place had sporadic rain before that, and so they responded the best,” Jodie said.

“But there’s also a paddock on each place that’s missed out and grown nothing.

“We haven’t gone into Christmas happily for the last six years.

“It’s the biggest bellyache – you’re always looking at your cattle and wondering if they can go another week.” 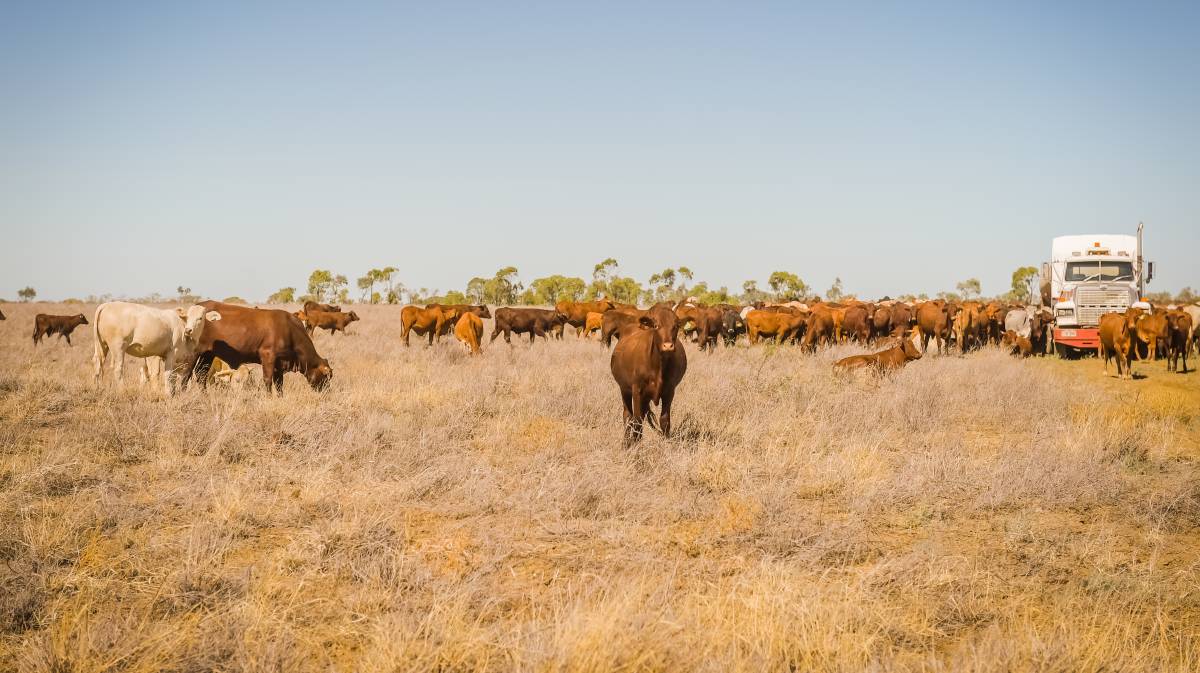 Some of the 1200-strong mob of Santa cross cattle, mostly weaners, that have spent months walking around Queensland's central west as drought has bitten hard at Corfield.

Queensland’s Agriculture Minister, Mark Furner, last week announced that 57 per cent of the state remained in drought, meaning that some western and south western shires were facing their sixth year of no substantial rain.

Exceptionally dry conditions have also been hurting farmers on the Darling Downs, including Nobby’s Melvin Mengel, who’s had no summer crop return for the last two seasons.

The decision by Jodie and PJ to go out on western Queensland’s stock routes for the second time, is one of many of the gut-wrenching ones they and many other landholders have faced in the past five long years.

They opted to buy Longford at Jundah in 2014, when agistment options in Queensland got squeezed and interest bills matched the cost of agisting, and Kendall at Stonehenge in 2016, again for grass, but with only 40mm this year, that country is virtually destocked.

Added to that has been the cost of transporting grape marc 1600km to feed breeding cows and calves at times over the years, and the costs associated with continually shuffling stock around to adapt to circumstances as the drought evolved.

They would normally keep their breeders at Corfield and the dry cattle at their Jundah and Stonehenge properties.

“It’s 500km between the two destinations but we’ve had to move our cattle a lot – you don’t realise but that adds up to hundreds of thousands of dollars,” Jodie said.

“We’ve gone out on a limb and we wish it would rain.

“At least the long paddock is enabling us to keep our core nucleus of cows at home, so hopefully we can hit the ground running when it finally rains properly.” 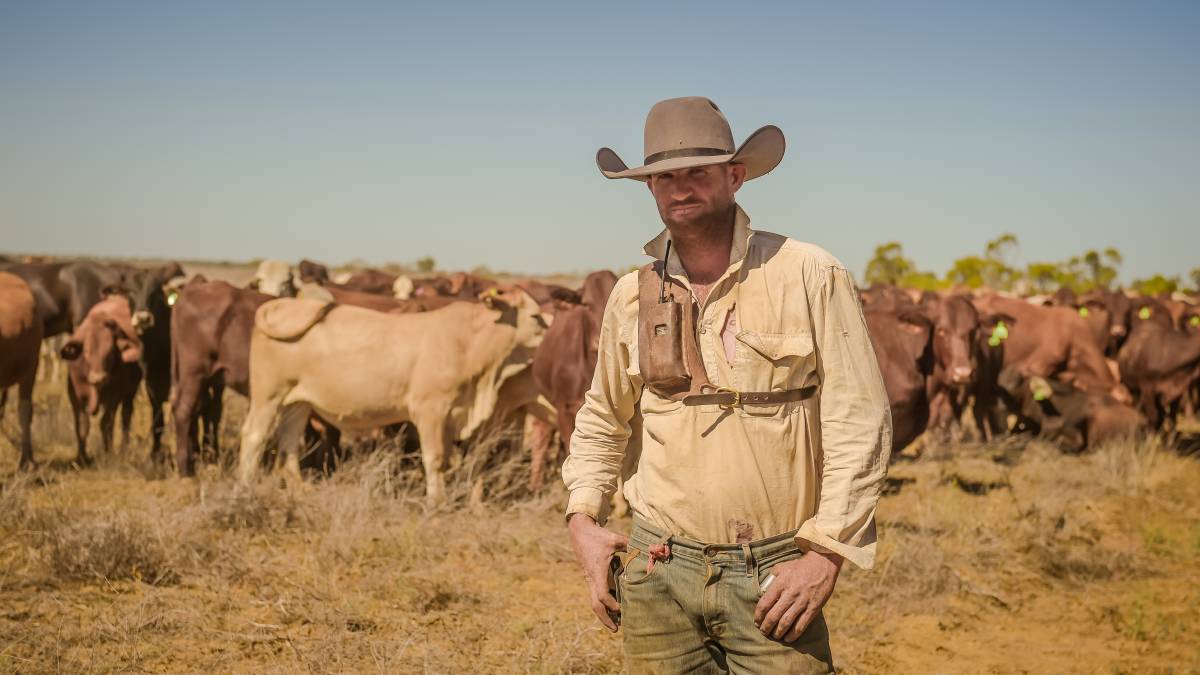 Ned Elmy with some of the cattle he's been walking for eight months on behalf of Corfield's PJ Elliott and Jodie Muntelwit.

At the moment Ned and the mob are 10km east of Ilfracombe, after walking around country between Aramac, Jericho, Blackall and as far south as Morven.

At the start, he had been forced to walk the cattle 15 to 20km a day to give them a feed with the water available, but the investment of a water tanker has made a lot of difference.

“A water tanker is the trick with droving these days,” he said.

“We’ve come across a lot of the route that’s been chewed out from temporary agistment permits.

“We went from Blackall to Jericho to Barcaldine, which probably hadn’t been used by drovers for 10 years.

“It was tough going – there was plenty of feed but a lot of wattle, and we had to cart water. It was all a bit run down.”

Ned, 26, has also struggled to find people prepared to put their hand up to learn the droving trade and said if it wasn’t for his dogs, he wouldn’t be in business.

“There’s two of us looking after the mob,” he said. “It gets a bit full on but it’s hard to get staff; it’s nearly impossible.”

Jodie said she and PJ were forever indebted to Ned for his care of their cattle, but for Ned, the admiration was all for the couple struggling to stay viable in the face of a drought that won’t lessen its grip.

“PJ’s kept a lot of cattle alive on the stock routes over the last few years,” he acknowledged.

Jodie said it was a case of constantly reassessing.

“This is our best option at the moment,” she said. “We’ve only got half a season, but we’re just trying to keep our females on the grass we’ve got.”

And despite the long, hard road they’ve been on and still have a way to travel, Jodie said there was nothing else that PJ wanted to do than excel in the cattle industry game.

“We could be in drought for 20 years and he’d still be doing this.”