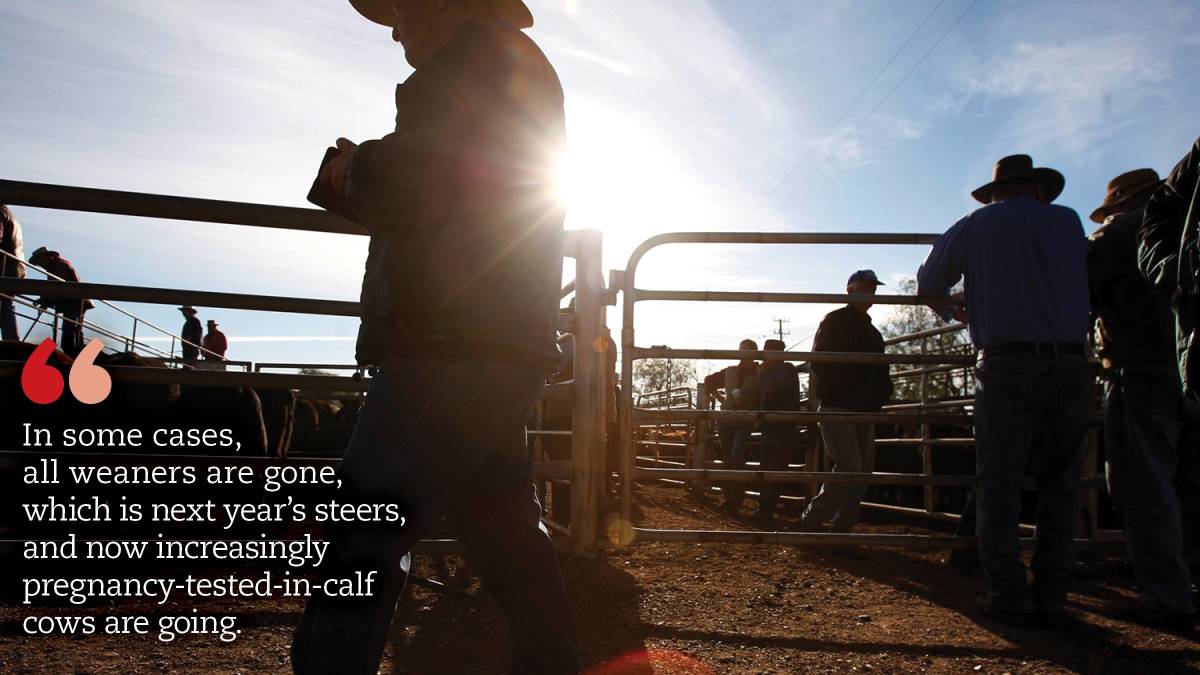 Talk has turned to a shortage of cattle come spring.

THE INCREASED volumes of stock coming onto the market as producers in extremely dry parts of Queensland and NSW pare back to what they can hand feed over winter has now extended to pregnant cows, fueling talk of significant cattle shortages as early as spring and well into next year.

With a poor rainfall outlook for winter, it’s difficult to see restockers coming back into the cattle market in the short term in any significant numbers, so the downward pressure on the Eastern Young Cattle Indicator is likely to continue.

Agents and consultants are calling big areas of beef breeding country in Southern Queensland and throughout NSW “disaster zones” and say producers are fast bringing down numbers to the “core essentials.”

“In some cases, all weaners are gone, which is next year’s steers, and now increasingly pregnancy-tested-in-calf cows are going,” Goondiwindi-based consultant Andrew Wilkie, Objective Livestock Marketing, said.

The story was the same in much of NSW and the surplus stock in the marketplace was combining with far few buyers because backgrounding and fattening country, right down to southern NSW and Victoria, was extremely low on feed, consultant Bill Hoffman said.

The EYCI followed a mostly downward trajectory during May, Meat and Livestock Australia analysts reported, finishing at 466.5 cents per kilogram carcase weight compared to an opening May price of 501. Cattle yarded at Roma, Queensland, in late May.

Last week, there was a slight lift, possibly on the back of forecast Riverina rain, but market analyst Angus Brown, Mecardo, says another 20c at least would be required before any claim could be made the downward trend has been broken.

While a downturn in the market was always forecast for 2018, MLA’s markets boss Scott Tolmie said the EYCI had faced a lot more downward pressure than anticipated because the supply of cattle with the dry-induced turn off was not expected.

Consultants and producers say this has been a different drought to normal in that it has been dominated by periods of zero rain.

“The problem is as you go through summer and then autumn you expect some rain,” Mr Wilkie explained.

“For most of our clients, 50mm in two events over the last three months would have made a huge difference, allowing oats to be up and going.

“But we’ve literally had no rain.

“We can all manage for lower rainfall but you can’t budget on no rain.

“So, aggressive decisions are now being made about selling whatever they can.”

Nationally, rainfall in May was the third lowest for the month on record and in the lowest 10 per cent of the Bureau of Meteorology's historical observations for May for the majority of northern and eastern NSW, southern Qld and southern Western Australia, MLA analysts reported.

Given those conditions, many producers are surprised the market hasn’t fallen harder.

Record numbers on feed and robust overseas demand for Australian beef appear to be providing support.

Some parts of Queensland and Victoria have also had reasonable seasons and say cattle with condition are still selling quite well in their neck of the woods.

Mansfield, Victoria, consultant Rod Manning said although there was a lot of feeding to do in front of them, many producers in his area had carry over feed from spring.

Returns were still above costs of production and the thinking was a decent break across most of Australian would see prices pick up quickly, he said.

As would be expected with the increased supply, slaughter rates are up and tipped the 150,000 mark at the end of May for the first time in a year.

At 109,700 tonnes shipping weight, it was Australia’s second largest May on record, only surpassed by May 2015 during the middle of the drought-induced herd liquidation, analysts said.