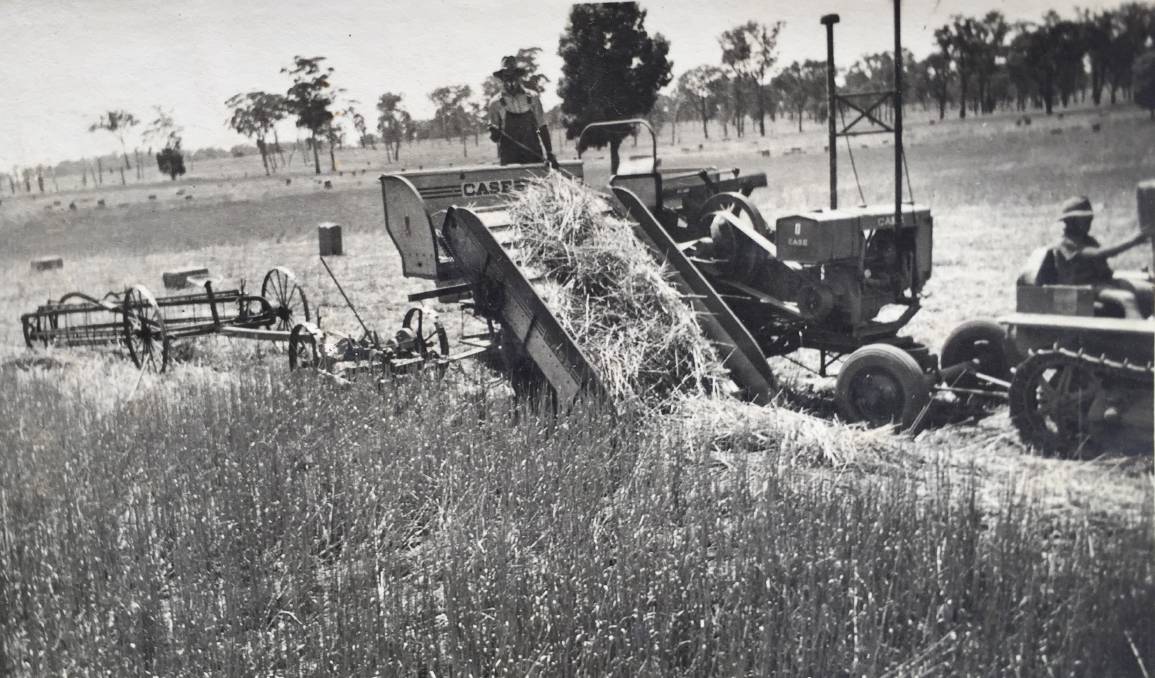 Improvisation was the name of the game back in 1937 when haymaking within the paddock was a key conservation method.

Back before “Wargundy”, Crabbon, was split between four brothers, their father Ernest Kenneth Bowman, known as Ken, was heavily involved in fodder conservation, according to his grandson, Brian Bowman of “Shingle Hut”, an original portion of “Wargundy”.

“EK Bowman won a lot of prizes for fodder conversation back in the 1930s and 40s,” he said.

Four of the old photos are reproduced and show haymaking in progress from crop to shed.

“EK was the first person to cart polo ponies on a motor vehicle, around here anyway,” Mr Bowman said.

“He did that with a Dennis truck, which is still in a shed here. A float was attached.”

Mr Bowman said EK started with an A Model Ford with the same float on top.

“He then carted his polo ponies on this. Even with one eye, the big man played polo and shot with a four-ten pistol.

“It was different in those days. We had a polo paddock here, a golf course and a cricket ground.”

Ken Bowman was very innovative. He built his own hay loader (elevator) to load bales of hay.

In the main photo above Bowman used one crawler tractor, an engine functioned hay press, a sickle mower and a rake to make wheaten hay all in one operation.

In another, four men used the home-built bale loader to load bales onto a truck, then unload onto the haystack.

“Back then there were plenty of workmen,” Mr Bowman said.

EK built haystacks in the paddock where the lucerne hay crop was grown.

“To make a hay shed he would have poles put up, then have a circular bin made from bales,” Mr Bowman said.

“The ‘bin’ was then filled with bags of oats, raised by his home-made elevator and tipped in. Then a roof was built over the top.”

In other paddocks where haystacks were built, old railway sleepers were used and placed around the edge. Then a roof would be pitched and covered with corrugated iron.

Mr Bowman said stock would graze right up to the stack, which created a fire-break.

“In dry times or drought, stock were fed from that point,” he said. “These days with mechanisation, we are travelling a few miles about our properties carting fodder, where back then with plenty of men working, fodder was conserved in the paddock.”

The two pits ware 50 metres long and a bit over four metres wide holding 750 bales each and covered in plastic and round bales to separate the metre-plus of dirt covering.

They were dug by machines and filled by front-end loaders with fork-lifts, a far cry from 81 years ago.