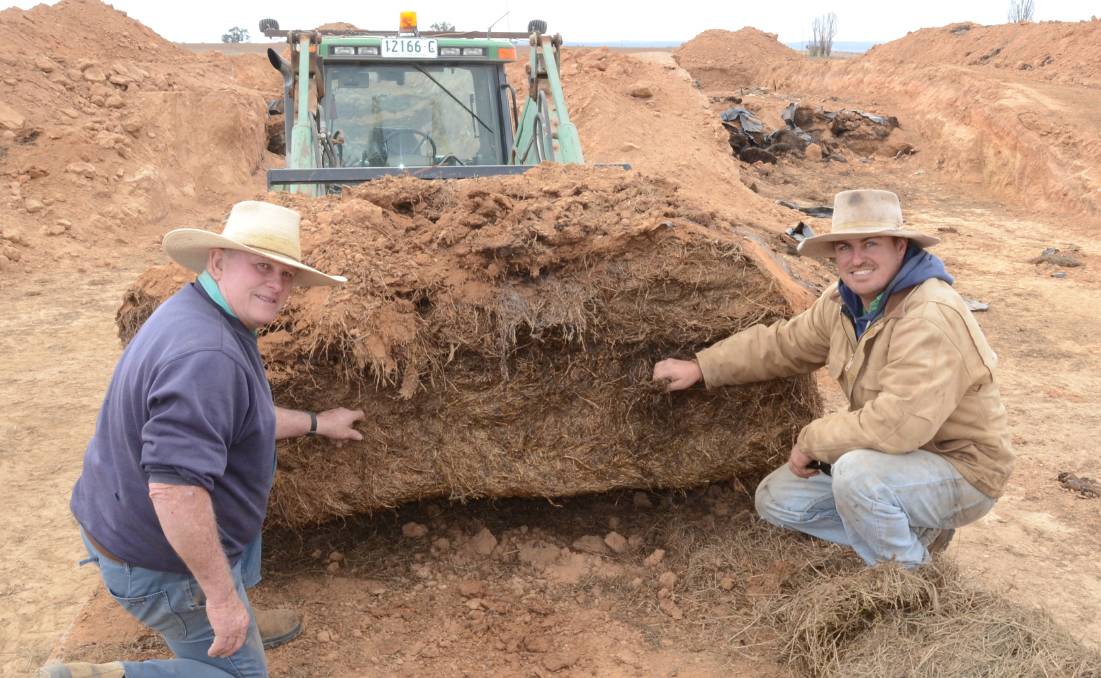 Brian Bowman and son, Andrew inspect the bales of rye grass and lucerne hay just dug out of a silage pit Mr Bowman put in at "Shingle Hut", Dunedoo, when Andrew was just 10 years of age in 1996.

Silage is a good form of fodder conservation and it's been working at Dunedoo.

For Talbragar River cattle breeder and grazier Brian Bowman, droughts and floods are not new.

The Bowman family at “Shingle Hut”, Dunedoo, experienced three consecutive floods in 2010 to 2012, wiping out each year’s crop.

Mr Bowman said each flood covering all the river flat country was in November and wiped out 486 hectares of wheat crops in each of the first two and a big canola crop in the third year.

“You wouldn’t believe it, but the following year a big frost cleaned out our grazing wheat crop and it’s been dry ever since,” he said.

In dry times, though, the property has been self-sufficient except for one time when cotton seed was purchased during the millennium drought.

“I only bought grain once in 50 years.

“My father, Matthew Bowman, “Curragundi”, Dunedoo, always had enough oats in the silo to get through a second drought without harvesting in between.

“In the 1965 drought in particular, he still had grain on hand.”

Colossal amounts of lucerne hay have always been made and put away on “Shingle Hut”.

Only just last month two silage pits Mr Bowman had made on the property in 1996 had been opened to feed stock since this prolonged dry had turned into a drought.

“They were dug into a rise on a bend of a water course a few feet above the water line, 50 metres back and about five metres wide and filled with 750 bales 6x3x2 feet in each pit, one of rye grass pasture and the other of lucerne rye grass mix,” he said.

“That was the first time I had put silage into pits since I was a youngster watching dad and in those days it was chopped lucerne by a Grasslands forage maker.”

The Bowmans are currently hand-feeding 300 EU heifer and steer weaners and 140 breeders of Shorthorn and Maine Anjou blood running on “Shingle Hut”.

Read about the fodder conservation and innovation of Mr Bowman’s grandfather, Ernest Kenneth (Ken) Bowman at “Wargundy”, Crabbon, from which “Shingle Hut” was divided after his death. 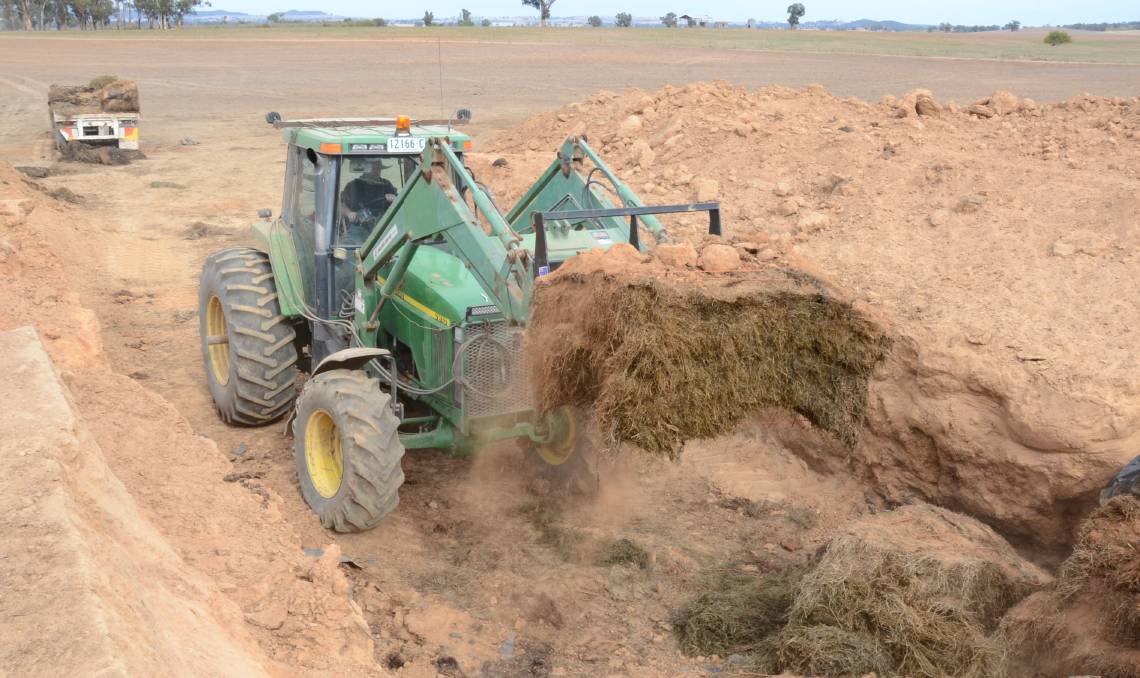 Pulling bales from the silage pits at "Shingle Hut", Dunedoo.

ANDREW Bowman was just 10 years-of-age in 1996 when his father, Brian, dug two silage pits and filled them with 1500 bales of rye grass and lucerne mixed hay.

Fodder conservation has always been a main-stay at “Shingle Hut”, Dunedoo, operated by Andrew and wife, Lan, with his parents Brian and Pam, and even decades before by Brian’s uncle off whom he purchased the property years earlier.

Today the 1215 hectare property on both sides of the Talbragar River is more drought-proof thanks to a lateral move irrigator spanning 800 metres and travelling 2.5 kilometres along the river flats, this year growing winter wheat and lucerne in 160ha.

“We’re pulling the bales out two at a time with a fork attached to a front-end loader, then feeding the hay to 300 EU heifer and steer weaners and 140 Shorthorn and Maine Anjou blood breeders,” Brian Bowman said.

“We covered the bales with plastic, then with round bales before covering with a metre of dirt,” he said, “To separate the dirt from the bales.”

Close to 23 years later the hay silage is perfect and even smells sweet.

“My brothers, David now at “Curragundi” and Michael, “Gundy”, Tooraweenah, and even cousin Gawain at “Wargundy”, all have the same philosophy. They don’t buy-in feed.”