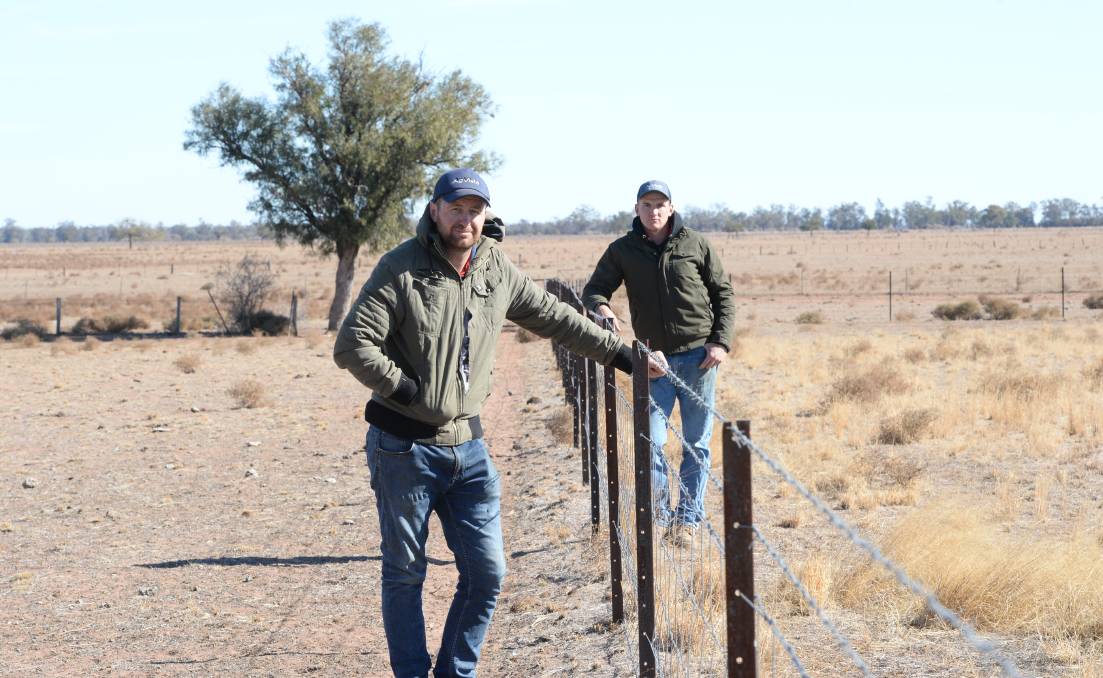 Brad Purdy, "Raheen", Baradine with farm worker Joel Davis, standing in paddocks which Mr Purdy has tried to save from having the grass cores eaten out only to see hundreds of roos move in. Photo by Rachael Webb.

Thousands of roos have moved from the Pilliga and the Warrumbungles and onto farms.

As farmers battle to maintain pastures in the drought, they have hailed the NSW Government’s relaxation of regulations on culling kangaroos on farm as timely and overdue.

Baradine farmer and cotton agronomist Brad Purdy, “Raheen”, said the action was needed to address an issue that is on “everyone’s lips” around where he lives (and also in most of central and western NSW).

Every night he can hear shooting around his property and every night he finds about 50 roos up his driveway close to the house. In the bare paddocks which he is trying to protect for his 230 cows and 270 weaners, roos have got into the grass, eating out the cores. There were 48 kangaroos in that paddock he was trying to save on Tuesday.

On the road from “Raheen” to Coonamble at night he says you have to crawl along at 50km/h as you will see nothing short of 300 to  500 roos. There was some spilled grain near a bridge where 60-70 roos were at the grain,  he said. He’s had two professional shooters on “Raheen” but they have done little to dent kangaroo numbers. They run out of tags very quickly.​

The new regulations announced by Primary Industries Minister Niall Blair will give Mr Purdy more control to  cull roos, easing many areas of red-tape, including having to visit a National Parks office to obtain culling licences and tags.

Mr Purdy  has already just bought guns to do his own culling. “I will also get a recreational shooter on as well and that will make a bit of a difference,” he says. “Kangaroos have been increasing in volume for years and years and the problem is on everyone’s lips at the moment. Every night I can hear someone in the vicinity shooting.”

The new regulations will cut red-tape and allow farmers to:

Times are tough to say the least around Baradine and Mr Purdy only survives by his off-farm agronomy service. He hasn’t planted a crop for two years and can hardly register how much rain he’s had this year it’s been so small. He fears now with any rain the roos will quickly move in on any new pick. Anyone bordering a forest or national park was facing the same predicament as hungry roos seek water and feed, moving far into farmland areas. That’s on top of kangaroos already on farmland.

“It’s pretty futile when you are trying to protect a paddock. I’ve got the cattle in smaller 100 acre paddocks to preserve some paddocks, but the roos have just moved in on those other ones,” he said.

Primary Industries Minister Niall Blair told The Land he pushed through the new regulations because it was obvious kangaroos were not only damaging farms that were already struggling with drought, but also causing  a major public safety issue on the state’s roads. Mr Blair also said it was an animal welfare issue as well, as kangaroos struggled in the drought, and farmers saw them dying of starvation.

He also had a personal experience with the dangers of kangaroos. A friend cycling in the Southern Highlands was knocked off his bike by a wayward kangaroo and his friend suffered two broken vertebra.

“I challenge anyone to say there has not been an explosion in kangaroo numbers in NSW,” Mr Blair said.

“But I won’t debate this in the city, I will get them in the passenger seat and drive them out west and they can see for themselves. You can talk to any farmer and they will say the same thing of how bad the kangaroos have been. Not only that, it’s become a welfare issue for kangaroos with farmers seeing them die in distress.

“We are making it easier for landholders to manage high numbers of kangaroos. The changes will reduce red-tape and streamline processes for non-commercial licences.”

Government will also support landholders to connect with commercial harvesters which will provide landholders an additional tool to manage kangaroos.