Jenny and Matthew Durack, Toowoomba, have taken the job of macadamia farming very seriously, as unveiled during their recent community open day at Wardell via Ballina

Maintaining social licence to carry out business is a cost that should be factored into the total farm budget, says a start-up macadamia enterprise which is converting flood plain previously covered in sugar cane to nut production.

Maintaining social licence to carry out business is a cost that should be factored into the total farm budget, says a start-up macadamia enterprise which is converting flood plain previously covered in sugar cane to nut production.

In his previous role as industry development officer with the Australian Macadamia Society, Mr Commens witnessed the need for agricultural transparency, as macadamia farmers dealt with concern about erosion and pest management from a very vocal Northern Rivers’ public.

In the case of 2TE’s foundation farm, “Salt Spray” on the Richmond River coastal floodplain near Wardell, there are a lot of good things happening and so it makes sense to spruik them.

In pursuing Integrated Pest Management there will be native vegetation corridors on the farm where erosion can be checked, where good bugs can proliferate, and where bad bugs can be monitored. Multiple grass and ground cover species will be planted across the orchard floor.

At Salt Spray, the native vegetation corridor will cost less than five per cent of the total farm development budget and has already returned a dividend in helping explain the farm’s fresh approach to agriculture.

To kick off the project 250 trees were planted last weekend, during a community open day, which featured free food and a jumping castle.

“The macadamia industry is very open and transparent, and we want to continue that culture in our orchard development here at Wardell.” said Mr Commens.

Property owners, Matthew and Jenny Durack, are no strangers to  nut production. While Mr Durack first practised as a veterinarian specialising in pork he swapped to pecans while managing Stahmann’s nut farm at Pallamallawa and its processing enterprise at Toowoomba. He later raised capital to buy the pioneering family enterprise.

During his time with Stahmanns Mr Durack dealt with irrigation efficiencies to double and in some cases triple water efficiency. Integrated Pest Management proved beneficial with zero pesticides now used. Now, in macadamias, there are new issues that require inventive thinking, in particular flood plain drainage.

As Salt Spray is so close to the sea, and with clay lying half a metre or less below the surface, there was a requirement to think outside the box when it came to growing macadamias, considering their roots go back to well-drained rainforest Ferrosols. 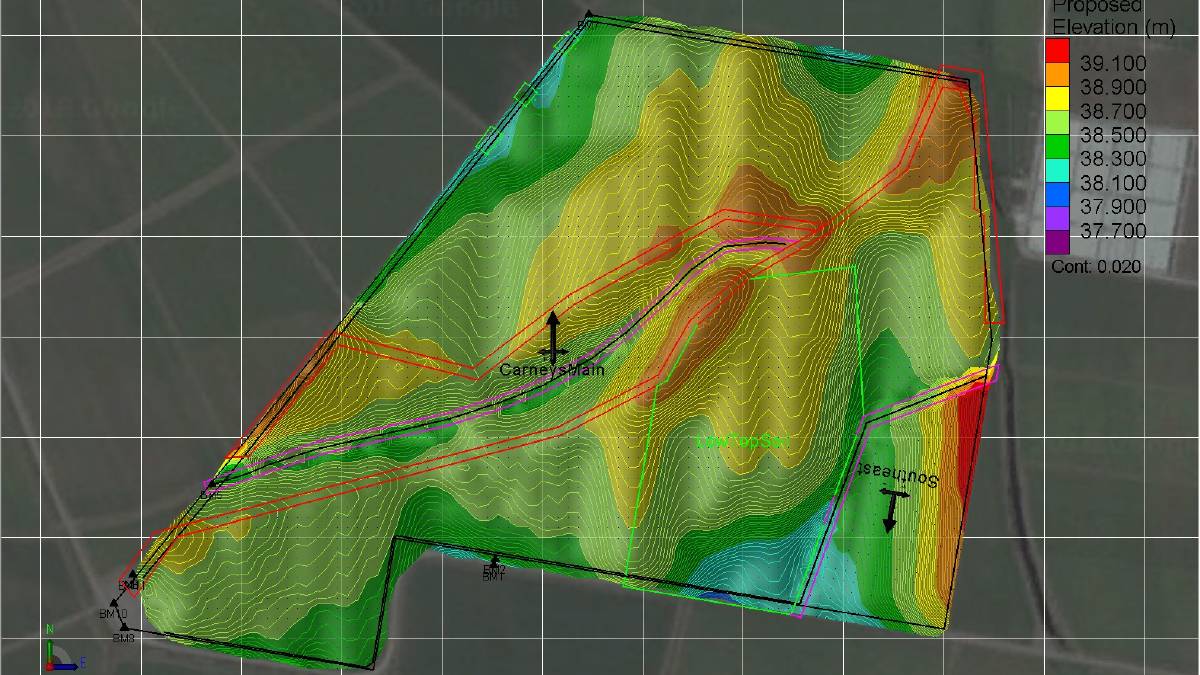 “Neighbours warned us about exposing the clay subsoil,” recalled Mr Commens, and 30 pits dug across 60ha indeed revealed that the excellent dark, clay loam was often just 250mm deep, followed by either clay or white sand.

“We wanted to make sure to keep that soil and not waste it,” said Mr Commens. “We didn’t want to shift good soil on top of more good soil and expose, in other places, the poor substrate.”

The solution came through Dr Graeme Cox from OptiSurface, based in Queensland, whose innovative software has been used to design more than one million acres of land across Australia, North America, Africa, South America, Europe and Russia. This was the first known macadamia plantation application.

Dr Cox modelled and analysed the field topography based on a GPS field survey.  He then used the software to optimise the topography to achieve minimum and maximum slopes with least possible earthworks, using what he terms “Continuously Variable Grades”.

The result is a subtle variation in the grading of soil, allowing surface water to exit the paddock slowly and in a non erosive fashion into deep piped drains. The method shifts up to 80 per cent less soil compared to traditional laser-levelling.

Of course the lower earthworks enabled by the use of OptiSurface modelling and RTK Global Positioning System machine control technology, makes each cubic meter of soil moved slightly more expensive –  but the total job it is still far cheaper than “conventionally” laser-graded paddock. However the biggest benefit is not moving as much precious topsoil.

Mr Cox points out that sub-surface laying of ag-pipe is useful but it is far more cost effective,” he says, “to solve any surface water drainage problems first.”