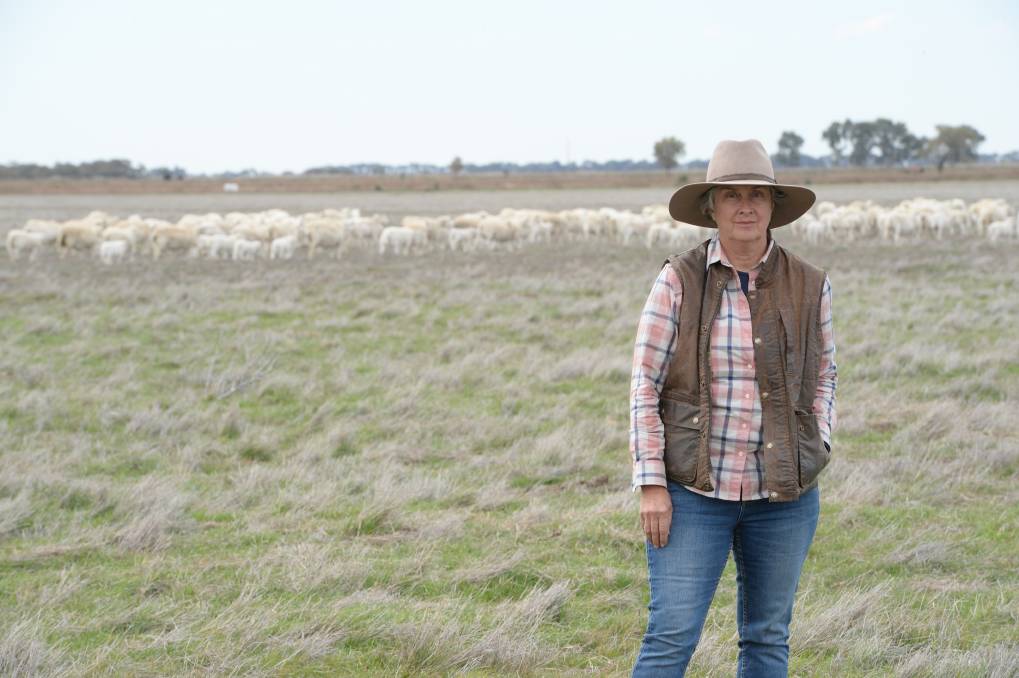 The high fertility of Dorper sheep is helping Griffith region producer, Sally Jones, achieve her aim of keeping her ewe flock as small as possible while producing large numbers of top-quality lambs.

She operates a 4200-hectare irrigation and dryland Dorper enterprise based at “North Corynnia”, near Tabbita, north west of Griffith.

“Flock rebuilding after this dry, however long it lasts, will be fast because of the exceptional fertility of Dorpers and the capacity of Dorpers to lamb more often and at a high rate,” she said.

Dorpers were polyoestrus which meant they could breed all-year-round, she said.

“I went into Dorpers a decade ago because they were going to be simpler to manage than sheep with wool,” Ms Jones said.

“Dorpers naturally shed their wool and the initial breeding objective was to have good shedders. I started by crossing an existing Merino flock with Dorper rams and then added a Wiltidorp flock acquired from Booligal.

“Both flocks had large-framed sheep and this attribute has been retained over the years. The classing has been done by Mick Armstrong from Goolgowi who has a deep knowledge of sheep and the local environment. He has selected for robustness.

“Jock Dunn from Hay regularly undertakes pregnancy testing of the flock and dry ewes are sold.”

Her flock of more than 5000 head came into 2018 in good order. Hay was bought in from February to stretch out other feed and multi-species pastures were irrigated in autumn.

“Even so, the season has been immensely challenging and is becoming more so,” she said.

The flock is divided into several mobs which are joined sequentially to spread season and market risk.

For several years Ms Jones has been sourcing White Dorper rams from the Glinski family’s Wirlinga Park stud at Thurgoona near Albury. They save her time by shortlisting rams suitable to keep improving her herd.

“The high quality rams from Wirlinga Park have translated into genetically superior recent generations, so younger ewes will be retained along with exceptional older ewes.”

All lambs and ewes turned off the property are sold by Mark Flagg Property and Livestock through Griffith saleyards with most knocked down to meat buyers. Lambs are sent to sale at between 43 to 55kg liveweight.

After attending a Sheep CRC conference in Adelaide in 2010 she began to focus on immune system support as a means of dealing with sheep health challenges.

Sheep are handled in their own domain rather than in central yards. Paddocks are rested to disrupt parasite cycles and the flock always has access to Compass Feeds’ loose lick, Grazeforce B1, that has been tweaked for conditions at “North Corynnia” to ensure good nutrition.

Notable ingredients include vitamin B1 (thiamine), iodine and zinc.

Ms Jones said because of a correlation between flystrike, lambing difficulties and tail length she decided to leave tails longer to protect rectal function.

“Tails are no longer docked at all. Stress is avoided. Sheep are vaccinated and there is little need for the use of chemicals,” she said.

A regenerative approach to landscape management has gradually been implemented with a focus on retaining and improving ground cover and biodiversity.

“All pastures including irrigated pastures have a diverse range of plants. No monocultures are grown.”

Electronic tagging was introduced in 2015, initially on ewe lambs.

“EID tags are now applied to all lambs because I have the equipment to use the tags and gather information including about wether lambs sold at a young age,” Ms Jones said.

Electronic monitoring and weighing using a Clipex sheep handler started in 2017 with the help of Phill Priest, a Griffith shearer who is diversifying into contract livestock management.

“The process adds work but has provided insight into the condition of the flock, with weight gain data being helpful in planning sales.”

“More objective testing to improve lamb and sheep quality will become available and electronic tagging will facilitate application of these technologies,” she said.