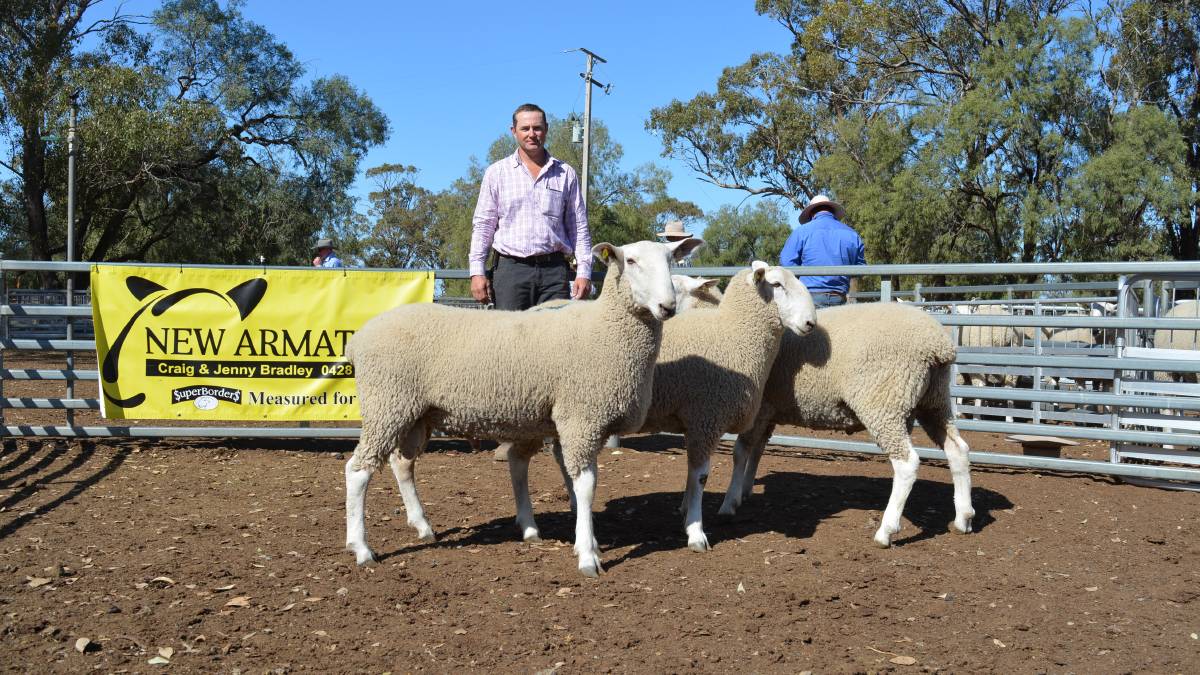 Buyer of the $2600 top-priced ram, David Greig, Bellevue, Tottenham, with three of the five rams he bought.

New Armatree Border Leicester rams sell to $2600 in a sale that reflected the dry, but where good prices were still reached for the higher performing rams.

Good performance has attracted buyers back to the New Armatree Border Leicesters sale, held yesterday, where prices topped at $2600 and averaged $1242 at auction.

Held on-property at the Bradley family’s Armatree property, New Armatree, a total of 50 rams sold at auction from the 89 offered, with a further 12 selling immediately afterwards.

Craig Bradley, who runs the stud with wife, Jenny, said the rams had been trail fed a wheat/barley ration leading into the sale, and given the season expected it would be “a good day to buy quality rams at good value”.

Among those was return buyer, David Greig, Bellevue, Tottenham, who bought five rams to average $1820 and included the sale topper.

Mr Greig was seeking rams with “all-round” figures, including a high Border Leicester Index, and Number of Lambs Weaned Index.

He was also after good post weaning weight and maternal weaning weight, because his focus is on producing ewes for sale as first-cross ewes and these needed to perform for their buyers.

“If you can couple that with a bit of fat and muscle, that will help lamb survival and conception rates,” he said.

Mr Greig currently has a drought-reduced flock of 2500 Mumblebone-blood ewes, down from his usual 3000 ewes.

About a third of his ewes are joined to Border Leicester rams. The ewe portion of the lambs are sold at 12 months, usually on AuctionsPlus, and the wether portion sold as store lambs.

The brothers run two flocks of 2800 ewes, one on Green camp, the other on a second property.

The Border Leicester rams will be used on the Green Camp flock to breed first-cross ewes to sell privately, and the first-cross wethers will finished and sold through the Dubbo prime sales.

Also helping clear a number of lots was Jemalong Wool representative, David Quirk, who had an order to fill for a new client at New Armatree.

He paid to a top and average of $1000, and sought rams with higher fertility and low birth weight to use on bought-in ewes.

His numbers are also reduced, currently with 700 ewes and 39 cows on his 1214 hectares.

Vendor, Mr Bradley, said given the season they were pleased with the result.

“The rams have had very little green feed – what they have had has been brought to them in a feed cart,” he said.

He said the passed-in rams would be retained for private sales.

Mr Bradley said a lot of their western clients, from areas such as Tottenham, Nyngan and Warren, were now approaching crunch time with decisions around how many ewes they will retain going into 2019.

“Because they’re approaching weaning, the cull ewes that would normally be retained to join to Border Leicester rams, will likely be sold if it doesn’t rain.”

Agency Halcroft and Bennett handled the sale, with Steve Colwell as auctioneer.