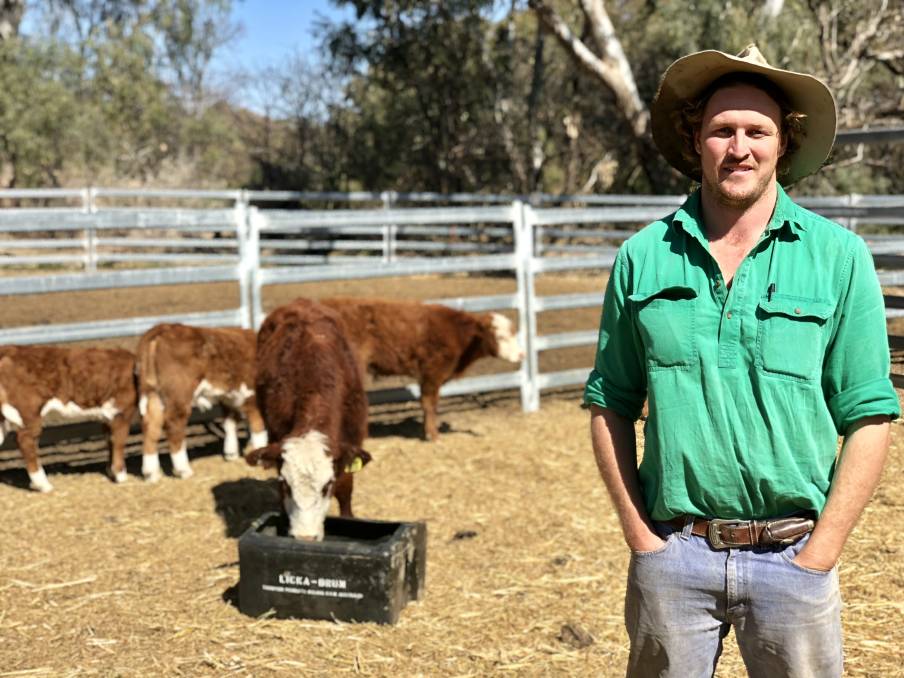 Drought has made Ben Egan, from Kiameron Pastoral Company at Warren, think outside the box on cattle management. Photo by Sam Townsend.

Drought has made Ben Egan, from Warren, think outside the box when it comes to cattle management.

What drought has taught Ben Egan is how to be a “problem solver”.

The sixth generation farmer from Kiameron Pastoral Company at Warren said while this drought was one of the toughest they had been through, it had made them think outside the box when it comes to cattle management, including their weaning.

Together with his parents Michael and Sue, and wife Eleanor, the family operates a mixed farming enterprise across 20,000 acres, comprising of cattle, irrigated cotton, and dryland winter crops including wheat, canola and chick peas.

“We’ve looked at issues at hand, there is not enough feed in the paddocks, cows are starting to slip conditions but we have calves on the ground that are still healthy and doing well,” he said.

For 10 weeks, they have been feeding out 20 tonnes of cotton seed a week as well as molophos and scrub cuttings and destocked their herd from 415 cows to just 75 cows with calves today.

“We wanted to keep as many calves as we could, but were limited to their size, so the question was, how early could we go,” he said.

With advice from local veterinarians, nutritionists as well as contacts in the Kimberley Western Australia where programs like this have been implemented, Mr Egan trialled an early weaning program of calves weighing between 50 to 70kg.

Mr Egan said he started with 10 head, which had grown to 55 in his program that was “working well”.

“Though their experiences and knowledge base we’ve put together a program that is right for our breed of cattle and getting the nutritional requirements they need to grow, survive and be healthy so we can carry them through until next year,” Mr Egan said.

“The young calves started in the yards for five days on good quality oaten hay and water and were introduced to a high protein calf pellet, blended with lucerne chaff to help them take to it.

“They were given a B12 vitamin and 7in1 Injection before spending the next three weeks in a feedlot pen. They have now graduated to a larger containment lot with access to pasture/failed wheat crop and are doing quite well.”

The calves spent a week in the yards, three weeks in feedlot pen, and next they will moved onto a failed wheat crop.

“It’s been a bit of transfer from hand feeding cows to produce milk  to give to calves, to destocking cows and hand feeding the calves which will be a more efficient use of feed,” Mr Egan said.

“Small animals need a lot of less to grow and be healthy compared to a cow, which at the end of day helps lower our costs, but still sure up out stock sales for next year, which will hopefully help us get through the drought.”