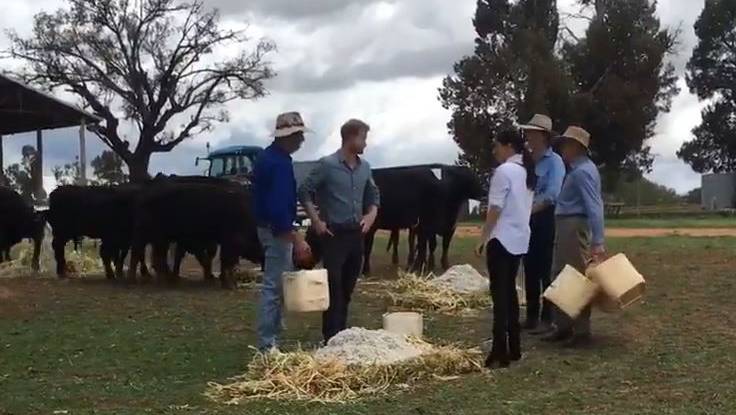 Prince Harry and Meghan get ready to feed stock some cottonseed on their farm visit at Wongarbon.

Meghan Markle showed her home town style today by baking banana bread for the family whose farm she and Prince Harry visited near Dubbo today.

After touring Mountain View farm, 25 kms from the city, she presented the Woodley family, who work the farm, with the treat, having spent her evening baking it in the kitchens of Admiralty House last night.

According to journalists there, it tasted great and even had choc chips in it – perhaps an American twist on banana bread.

The royals saw for themselves how badly the drought has affected the region, Harry, in particular, taking a keen interest in the plight of those who work the land.

They fed cattle hay and cotton seed, and heard how the farm has had to bring in hay from as far away as South Australia.

Elaine Woodley, who farms the land with her husband, Scott and daughter, Laura, said Meghan had told them how sorry she was to learn of the plight of farmers.

Although rain was forecast for the day, only a few drops fell just as the royals departed, with thunder rolling in ten minutes afterwards.

The 3000 hectare farm, which was worked by third generation farmers Margaret and Richard Woodley, until they retired, has had to destock its White Suffolk ewes, the 1400 they were running before the drought, now reduced to 250 stud ewes.

Related:  Dubbo looks stunning as businesses prepare for visit from Prince Harry and Meghan, Duke and Duchess of Sussex

Meghan took off her grey Serena Williams Collection check jacket and rolled up the sleeves of her Maison Kitsune loose fitting blouse to hear how farmers are struggling in NSW.

With galahs flying overhead and clouds gathering, the couple inspected part of the flock of ewes and fed the cattle before heading for a tea, baked by the Wongarbon CWA.

Meghan made a beeline for little Ruby Carroll, 13 months, and chatted animatedly with her mother, Emily.

“She told us that Ruby is very cute and said she is doing really well with her pregnancy. She said she is a bit tired but is busy that it is a nice distraction.

“They both laughed when Ruby wanted to walk off instead of playing nicely, but she also spoke about how sad she was about the numbers of people affected by the drought.”

Pip Job NSW Drought Coordinator and National Rural Woman of the Year and a beef cattle producer near Dubbo showed the couple graphs of the rainfall and explained how difficult it is to get hay.

Although Dubbo is green from a rainfall of 50mm two weeks ago, the land will soon turn brown if more rain doesn’t soon fall.

Scott Woodley said: “We’ve never know it as bad as this but we will get through it.”

Children from Wongarbon Public School waving Australian flags gathered on the gumtree-lined road road to the farm, with locals sitting outside their homes waving to passing traffic but they were disappointed when Harry and Meghan’s motorcade took a different route and missed them out.

But they did stop and get out briefly to meet another group.