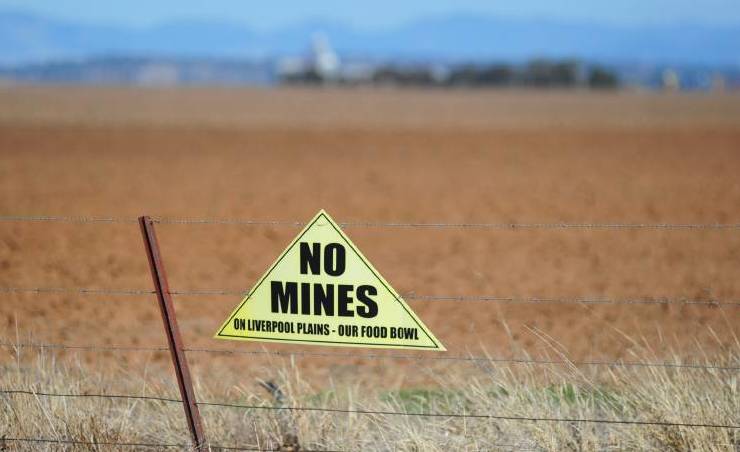 Uncovered documents reveal confusion and backtracking in mine approval process

Shenhua is developing the controversial Watermark coal project among some of NSW’s best farmland at Breeza, on the Liverpool Plains.

Landholder alliance, Lock the Gate, said documents released to the group by government sparked concerns that an agreement to renew Shenhua’s exploration licence was struck one year before the planning department had completed its assessment of the application.

The government has denied there was a deal to pre-empt the planning process.

The deeds were signed around June last year.

That’s the same time as when NSW Government paid $262 million to buy 51 per cent of Shenhua’s exploration tenement - an area it did not intend to mine.

At the time, government was considering Shenhua’s application to renew its exploration licence, which was eventually approved on July 21 this year.

The terms of the deeds haven’t been revealed, with commercial considerations cited as the reason for secrecy.

But it appears Shenhua believed the terms included an agreement for its exploration licence to be renewed.

Three days after the $262m buyback last year, and a year before the eventual approval, Shenhua advised the Hong Kong stock exchange it had a deal to renew its licence.

“(Shenhua) Watermark reached an agreement with the NSW Government in relation to partial extension of the exploration licence,” Shenhua’s statement to the market said.

A briefing document provided by the Department of Planning to Resources Minister Don Harwin requested he approve its contents by June 18 - listing the reason for the deadline: “to meet the requirement under the deeds of settlement for the government to renew EL 7223 as soon as reasonably practicable”.

On July 9 this year the miner wrote to Premier Gladys Berejiklian demanding its licence be renewed, citing an agreement in the deeds. The EL was approved 12 days later.

A spokesman for the Department of Planning said there was no agreement to renew the exploration licence.

“There was no deadline for any decision on the exploration licence renewal application in the deed of settlement, nor was there any commitment to renew the licence,” the spokesman said.

“The application for renewal was determined in accordance with the Act and usual departmental process.”

Labor mining spokesman Adam Searle asked Mr Harwin if there was an agreement in the deeds for the licence to be renewed.

“Will the Minister inform the House exactly what undertakings were given to Shenhua in connection with the Watermark project, given also that Shenhua informed the Hong Kong stock exchange last year that it had secured the agreement of the government to renew the exploration licence?”

Mr Harwin said the deed relates only to terms around the buyback of land from Shenhua.

“I assure the House that the deed did not afford Shenhua any special rights or privileges (for) its exploration licence renewal application,” Mr Harwin said.

“All applications for mining titles are subject to a rigorous process by the Division of Resources and Geoscience, and this title was no different.”

Shenhua’s letter to Ms Berejiklian complained about more than the renewal process.

The company said is was “completely unacceptable” that Acting Deputy Secretary of the Resources and Geoscince Divisions, Michael Wright, had advised Shenhua would be required to contribute $2 million to a community benefit fund.

Shenhua’s original EL required a $5m community contribution, which the company provided until the term expired in 2016 and Shenhua did not want to be forced to pay any more.

An email released under a freedom of information request showed Mr Wright emailed Mr Harwin’s office on April 16 this year recommended that a further $2m commnuity fund be a mandatory condition for the EL renewal.

requirement to establish a community benefits fund,” Mr Wright said in the email.

However, when the EL was renewed in July, the community fund was listed as a voluntary contribution.

A spokesman for the Planning Department said community benefit funds are not always compulsory.

“Shenhua’s application was for an exploration licence renewal. The work program put forward by this company is only in relation to exploration, and is limited in size and scope, and therefore has limited impact on the local community,” the spokesman said.

“As a result, it was decided that a voluntary contribution was appropriate.”

"This dubious decision is hanging around the Minister like a bad smell. The only way to clear the air is for the Minister to release the secret Shenhua deeds and tell the people of NSW why the Government gave a mining company a quarter of a billion dollars and got nothing in return,” Ms Woods said.

"These new documents indicate that someone in the Government thought the Shenhua deeds bound the Minister to renew the company's coal exploration licence. At this point, a denial is not enough.

"The public has a right to know what our money has bought and the terms of the secret deeds the Minister signed with Shenhua. If he won't release them, then it's time for the Premier to intervene and clear the air."

The story Did NSW do a special deal for Shenhua? first appeared on Farm Online.