Laura Woodley, 23, gets to have a personal chat with Meghan Markle, the Duchess of Sussex, on the Royals tour to Mountain View Farm near Wongarbon. Meghan was ready for some farm help and put out some cottonseed for the cattle and knew about soil moisture issues. She later gave the Woodleys a personally baked banana bread loaf. "We always take a plate when we're visiting," Meghan said of the Markle US tradition. Photo by Rachael Webb.

It’s not every day a Duke and a Duchess walk through the front gate on the property Mountain View Farm at Wongarbon near Dubbo – nor eight police with sniffer dogs, scores of press members and a retinue of VIPs and officials.

But that’s what happened yesterday when the Woodley family hosted Prince Harry and his new wife, US-raised Meghan Markle as the Royals took time out from their Dubbo visit to learn how hard the drought has been.

Laura Woodley, 23, even had time for a personal chat with Meghan, explaining what she does and how she is proud to be the fifth generation of Woodleys on the farm, a White Suffolk sheep stud.

Of course when the Royals arrived they saw nothing but green fields, with the property recording over 50mm last week – and another 15mm fell on the day of the Royal visit. 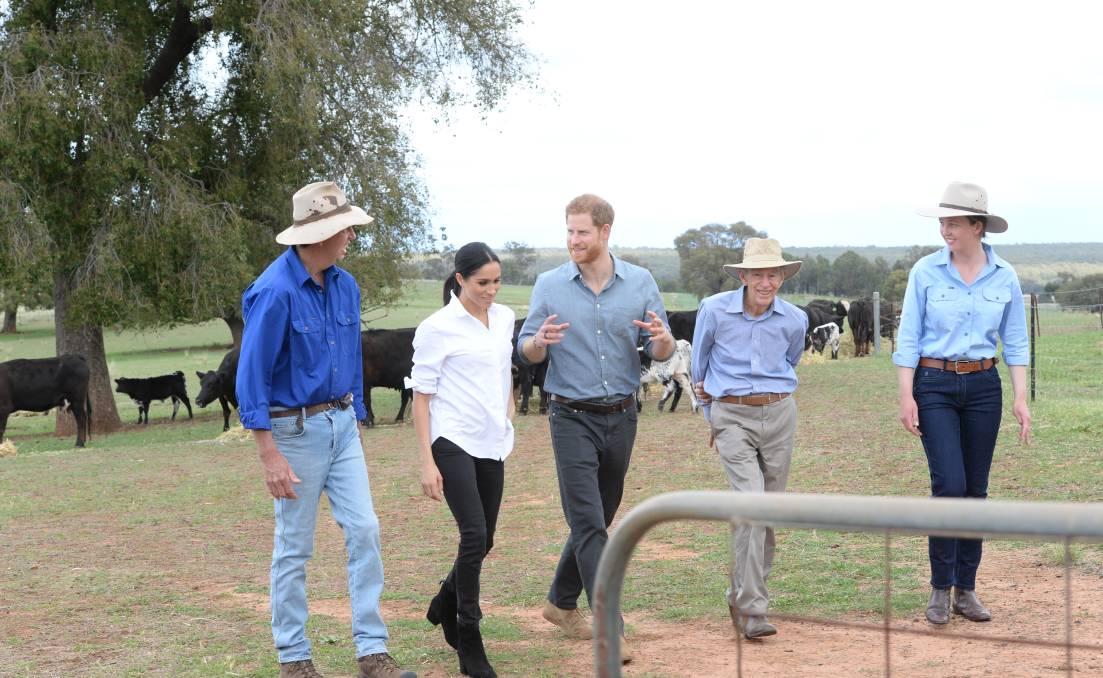 +14
Walking with the farmers at Wongarbon, Harry and Meghan's drought support visit

But Scott Woodley, Laura’s dad, said Harry and Meghan realised they were looking at a green drought while looking at new grass cover on Mountain View’s paddocks.

“They knew it all could change in a month if there is no follow up rain.”

Scott, his wife Elaine and his other daughters Benita, 20, Kate, 17, and Elsie 22, and Scott’s parents Margaret and Richard chaperoned the Royals around the farm so they could see at first hand how the Woodleys were coping with the drought, and struggling to keep stock up to the mark, with spiralling fodder costs.

Mr Woodley, a fourth generation farmer on Mountain View, said he’d already been forced to sell a large part of his 1500 crossbred ewe flock to cope with the drought, narrowing the flock down to just 250 stud ewes. He’d also reduced his cattle herd to 70 breeding cows, to make things more manageable on Mountain View.

The Royals understood the pain. “I think they both realised that while it’s green at the moment, things can change pretty quickly,” Mr Woodley said. “They asked a lot of questions about how we had coped the last couple of years. We showed them the hay shed and how we’ve had to bring in a couple of loads from interstate in June and July to get by. We told them how the prices for fodder had gone through the roof. It really amazed them, in our case from 250 a tonne to 600. They were quite amazed though how much the cattle liked the cottonseed, they’d heard of it but never heard of it as a feed.”

Harry and Meghan helped feed out a couple of buckets of cottonseed to the cattle.

“They relaised we were just into a green drought and that things could turn around pretty quickly again. Meghan seemed to know about subsoil moisture. She was very interested that Laura was taking on the farm full-time.”

The recent rain had grown quite a bit of feed already for the Woodleys, but the farm would need another 50mm before there would be any good run-off into their earth dams.

Elaine Woodley said she was honoured to receive a banana bread loaf from Meghan she had baked herself. “It went very quickly,” she said.

The Woodleys entertained the Royals around a table of food and they sat down and had a chat as the media looked on. Their farm was chosen for the visit about a month ago, after the Dubbo council passed on a few suggestions to the office of Prime Minister and Cabinet, which appeared to have done much of the arranging. “They wanted a full-time farmer not too far out from Dubbo, and an area they could walk around in fairly close to one spot.”

Before the Royals arrived, police and sniffer dogs did a security check through the Woodley’s house and through their sheds. The Woodleys sent their pet dog for a “holiday” during the exercise while their farm dog was kept well away from the activity and didn’t seem too perturbed by all the visitors. 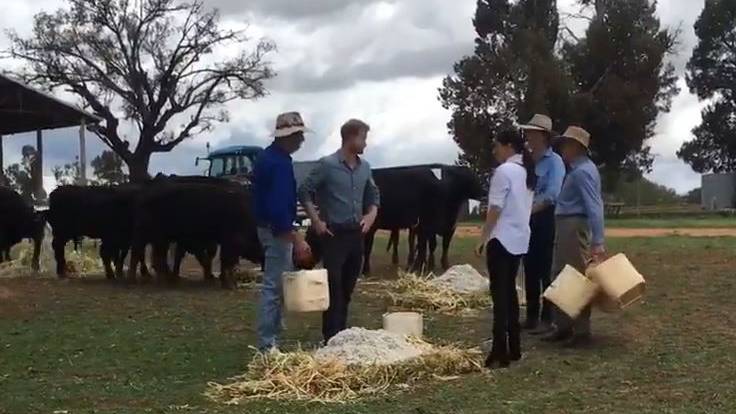 Mr Woodley said he was astounded by the number of British press on hand.

“Kensington Palace promised they’d send us some photos, so that was nice. Anyway, we got there.”

The Woodley family collected at the house fence and waved the Royal couple goodbye, as life on Mountain View returned to normal.

Luckily Elaine had a bite of the Duchess’s banana bread before it all went. “It tasted great,  it had choc chips in it.”