Getting set to retire from a career in journalism, Ron Miller needed something to fill his time. He found an enterprising solution and Jolly Miller Apple Cider was born. 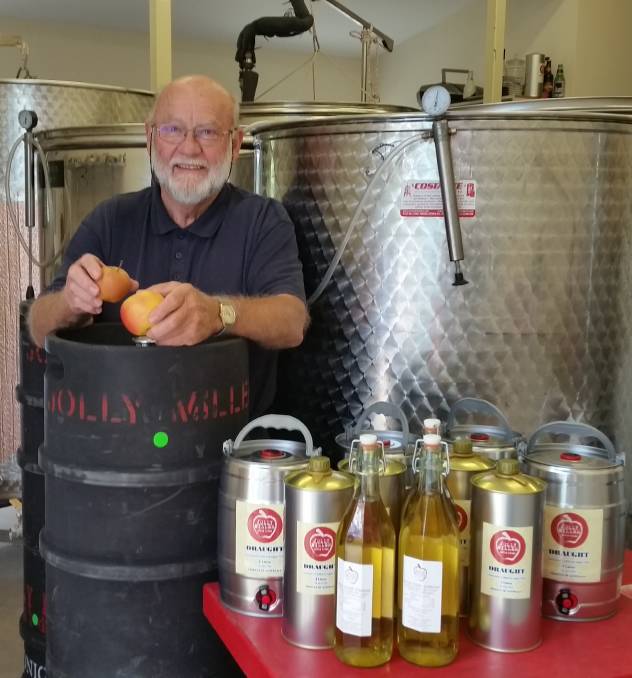 A 1960s sitcom was the catalyst for a retiring journalist and journalism academic to dive into the art of cider making.

Ron Miller remembers seeing a TV show where a public servant retired and decided to brew beer and sell it to the local pub.

“I guess that story has just stuck with me over the years,” Ron said.

“When I was retiring, I was thinking I would need an activity to fill up my time.

“I remembered the TV show and decided I could do that.

“At the time, everyone was brewing beer, but not many people were making cider, so I went into that.

“That has changed a bit over the last nine years as cider making has grown in popularity.”

Ron makes Jolly Miller Apple Cider out of the shed on the back of his property in Gundaroo, about 36km north of Canberra, with apples sourced from Cedar Creek Orchard at Thirlmere, NSW.

“The team at Cedar Creek know what apples I need and keep them aside for me,” Ron said.

“Jolly Miller is made from Pink Lady and Granny Smith apples.

“Doing 1000 litres at a time, my small chopper and press would take a day and a half to get that amount and creates issues around oxidation and keeping the juice clean.

“The Cedar Creek press makes that amount in eight minutes so they stop the press for me, chuck my apples in and fill my 1000 litre tank in no time with no oxidation issues.

“I add a very small amount of preservatives and bring the tank back to Gundaroo, then make the cider.

“Cider is classified into ‘Old World’ cider which is the traditional English style cider and ‘New World’ which is more wine-like and is popular in Australia. I am a New World cider maker.

“I make only one cider which is clean, dry and crisp, filling a niche in the market.

“I ferment it in the shed, leaving it to sit for a month to six weeks in the tank.

“Once it is settled, I pump it out and then let it settle again.

“I don’t filter it as I feel filtering takes some of the flavour out.

“When it is clear enough, I use an old soft drink carbonator from 1968 which is still going strong.

“I pump the cider into a cool room to get it nice and cold for carbonation and pump directly into 50 litre kegs.

“I then fill our smaller five and two litre kegs from the 50 litre kegs.

“I do all the Jolly Miller labelling, making and packaging from my little shed.”

Not leaving anything to waste, Jolly Miller use the 50 to 60 litres of byproduct left after pumping to make their own Apple Cider Vinegar.