Heatwave week: Give working dogs a few days off.

LIVESTOCK producers have been urged to closely monitor animals as severe to extreme heatwave conditions wash over large parts of the country from central Australia to the southeast over the next few days.

Cattle and sheep’s drinking requirements can triple in the sort of conditions forecast, livestock advisors and consultants said.

Another key thing producers should be looking out for is cattle attempting to immerse themselves in water becoming bogged in muddy areas.

“With dams receding due to drought conditions, boggy edges are widespread at the moment and could pose a potential threat,” NSW Department of Primary Industries beef development officer Todd Andrews said.

Black coated cattle, any late calves and any animals that have been sick or have a previous history of respiratory disease are particularly vulnerable. 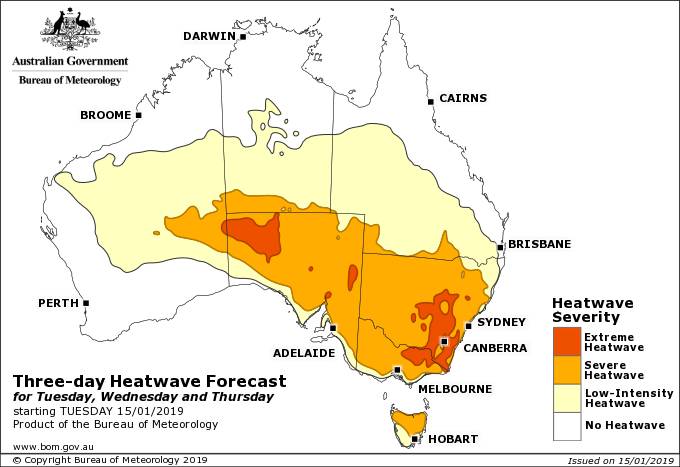 HOT HOT HOT: The heatwave situation from Tuesday until Thursday.

All states and territories except Tasmania have areas where the temperature is due to rise well into the 40s from now until the weekend.

In western Victoria, inland South Australia and western NSW, forecasts are reaching as high as 47 degrees.

The Bureau of Meteorology is forecasting daytime temperatures of up to 12 degrees Celsius above average and 10 degrees higher than usual at night.

Outside the band of severe and extreme conditions, widespread low intensity heat waves will affect most inland parts.

Pastoralists and city folk alike have been sweating it out since the start of the week, with new records set across the country.

The Sydney Morning Herald reported the warmest 15 places on the planet this week were all in Australia.

Tarcoola in inland South Australia reached a whopping 49.1 degrees while Yulara in the Northern Territory hit 46.1.

Sheep and crop producer David Quince, “Tambar Vale” at Tambar Springs in the NSW North West Slopes, describes the 45 degree days on his property for the past week as “sauna like.”

The forecast for Tambar Springs is even hotter over the next few days.

It’s not quite a record - “Tambar Vale” has hit 50 degrees before - but Mr Quince said he’s never seen his country so decimated for so long.

Only three of his 26 dams have water at the moment, and only very small amounts, so his Dorper sheep don’t have their usual swimming holes for cooling.

“Instead I’m pulling them out of troughs,” Mr Quince said.

“At least in conditions like this they don’t require the same feed intake, so they are basically grazing early morning then the rest of the time parking themselves in the shade.”

Government livestock advisors urged producers to ensure the location of water is familiar to animals before the extreme heat arrives.

Agriculture Victoria says the best type of shelter during extreme heat protects animals from the sun and allows for the cooling effect of wind.

Avoid handling stock. Research has shown that movement or handling of cattle during hot weather can increase their body temperature by 0.5 to 3.5 degrees.

Give working dogs the rest of the week off. 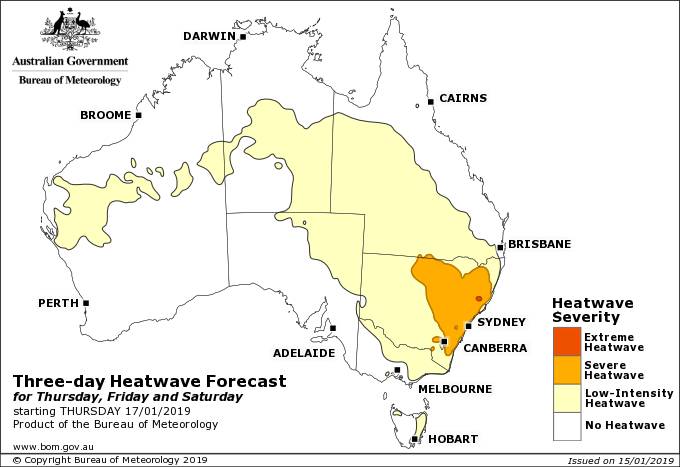