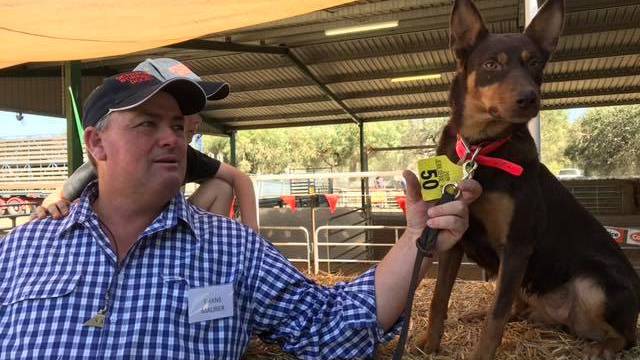 An Australian record price for a working Kelpie was achieved at the Jerilderie sale last weekend when Eveready Possum trained and offered by Shane Maurer, Getitdun Working Dogs, Milvale was sold for $25,000.

The three and half year old bitch was sired by Capree Dually out of Milburn Molly and was bought by Mr Maurer as six-month old pup and was bred by Nathan Cayfe, Eveready Kelpies, Woodstock.

It broke the record set last year at Casterton Working Kelpie Muster, Victoria when Glencairn Seven was sold by Christian Peacock from Waterloo for $22,200 to a buyer from Hamilton in Victoria.

According to Barbara Cooper, vice-president and registrar The Working Kelpie Council of Australia the sale of Eveready Possum has set the new benchmark.

"As far as I'm aware that is an Australian record price for a working Kelpie," Mrs Cooper said.

Last year, Mr Maurer sold a dog at the Jerilderie sale for $14,000 to Dwayne Evans, Wilcannia who returned to the annual sale to snap up Possum in a four-way tussle.

That sale was a record price for the Jerilderie Working Dog Auction, before being broken later in the year in June at Casterton. The selling team, buyer and vendor with the record priced working Kelpie after the Jerilderie sale. Photo: supplied

On his Facebook page, Mr Maurer wrote he will be back at Jerilderie next year but doesn't expect to keep breaking records.

"I can’t see me breaking it three years in a row but I’ll have a couple more dogs ready again next year for you all," he wrote.