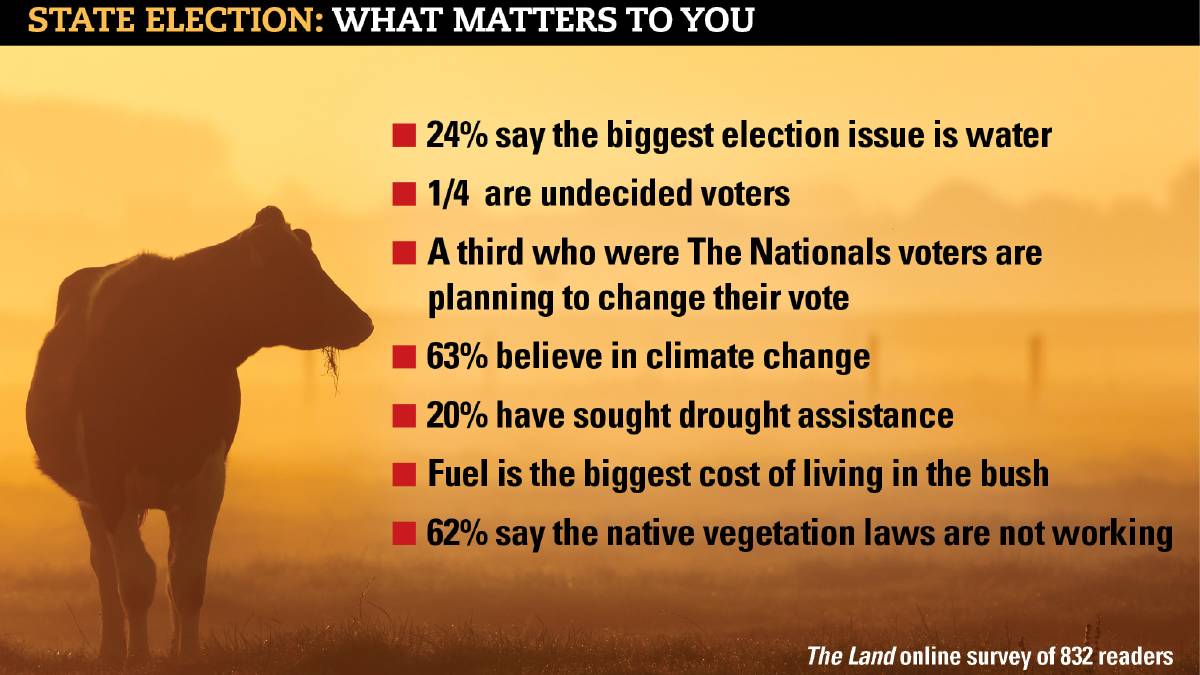 The Land readers say drought, climate change and water could sway their vote for the State Election.

Water is one of the key issues on farmer's mind heading into the NSW election.

Water is the biggest issue that matters to our readers when it comes to casting their vote this state election.

But while over a quarter are still undecided on who they are going to vote for, a third of people who were The Nationals supporters (36 per cent) are planning on changing their vote this Saturday.

An online survey of 832 people, conducted by The Land found 24 per cent say water was a hot issue this election followed by right to farm and health with 13 per cent. Of those surveyed 54 per cent were farmers.

The Land put the survey to NSW Farmers' president James Jackson who has analysed the results. Mr Jackson said drought and water policy were significant issues for NSW Farmers' members with the Murray Darling Basin Plan coming under significant pressure due to the dry conditions.

"At our Griffith focus fourm it was clear that rural and regional communities are feeling especially vulnerable," Mr Jackson said.

"Many farmers are faced with zero allocations, although the Murray River remains at a 'swollen' level in order to deliver South Australia's water entitlement."

He said NSW Farmers were pleased to see that the major parties have committed significant resources to water issues, and drought, should they be successful at the election.

"We remain concerned that a legislated Right to Farm and greater protection for farmers has not received wider support from the major political parties, and we will continue to advocate for these reforms, along with equitable access to health services," he said.

Who will you vote for

The major parties have a lot of work to do with just over a quarter of people surveyed still undecided (27 per cent) on who they were voting for this election.

Mr Jackson said the high number of undecided voters was an indication of how critical this election is for regional NSW, and how they are engaged in the political process.

"Prior to the election, NSW Farmers called for politicians and political parties to focus on agriculture," he said.

"With so many candidates standing in regional electorates, offering a variety of policy positions on many issues, it is encouraging to see voters in regional areas are not being taken for granted."

A third of people surveyed who were The Nationals voters (36 per cent) said they were planning on changing their vote this election. Of those surveyed 18 per cent are voting The Nationals, 17 per cent Shooters, Fishers and Farmers Party, 11 per cent Labor, 8 per cent The Greens and 7 per cent Liberal.

There was strong polling on climate change with a whopping 63 per cent saying they believed in it.

"Agriculture has the most to gain and the most to lose from policies designed to address climate change - getting the response right and continuing to refine it will be essential to the profitable and productive future of our agricultural sector."

Mr Jackson said they were getting feedback that people were struggling to meet the requirements for accessing state and federal government assistance packages.

He said NSW Farmers' continued to lobby government to find innovative ways to build awareness of drought assistance including for rural financial counsellors, faster processing of farm household allowance payments and the need for rural stimulus to support communities which are sustained by agriculture.

"Rain will not end this drought - the impact on farm incomes and production will continue for some time," he said.

"NSW Farmers stands ready to remind the next government just how impactful this drought is."

More than half (56 per cent) stated the cost of living for people in the country is worse than those of their city counterparts. Fuel was the biggest cost of living in the bush with 31 per cent surveyed, followed by electricity 24 per cent, fodder 15 per cent, water 11 per cent.

Mr Jackson said NSW farmers had been lobbying for some time to reduce the costs of transport, increase digital connectivity and competitiveness, and shorten supply chains to decrease costs.

"It is clear from talking to our members that fuel and energy costs are a major burden. It is not surprising that fuel is the biggest cost, given the distances travelled in rural areas and that it is a major input for producing food and fibre," he said.

Native vegetation laws are not working according to 62 per cent surveyed. Mr Jackson said NSW Farmers had developed a 10-point plan for further reform of biodiversity laws but it did not support any wind-back in these laws and would fight hard to improve what we have now.

"I was in the Monaro last week and saw first-hand where the laws were facilitating the invasion of exotic African Lovegrass into native pastures in that region of the state," he said.

"Ideologues are grasping onto the notion that you can legislate/regulate environmental outcomes from Sydney without considering the real environmental stewards of the land."