All the livestock champions from the Blayney Show over the weekend. 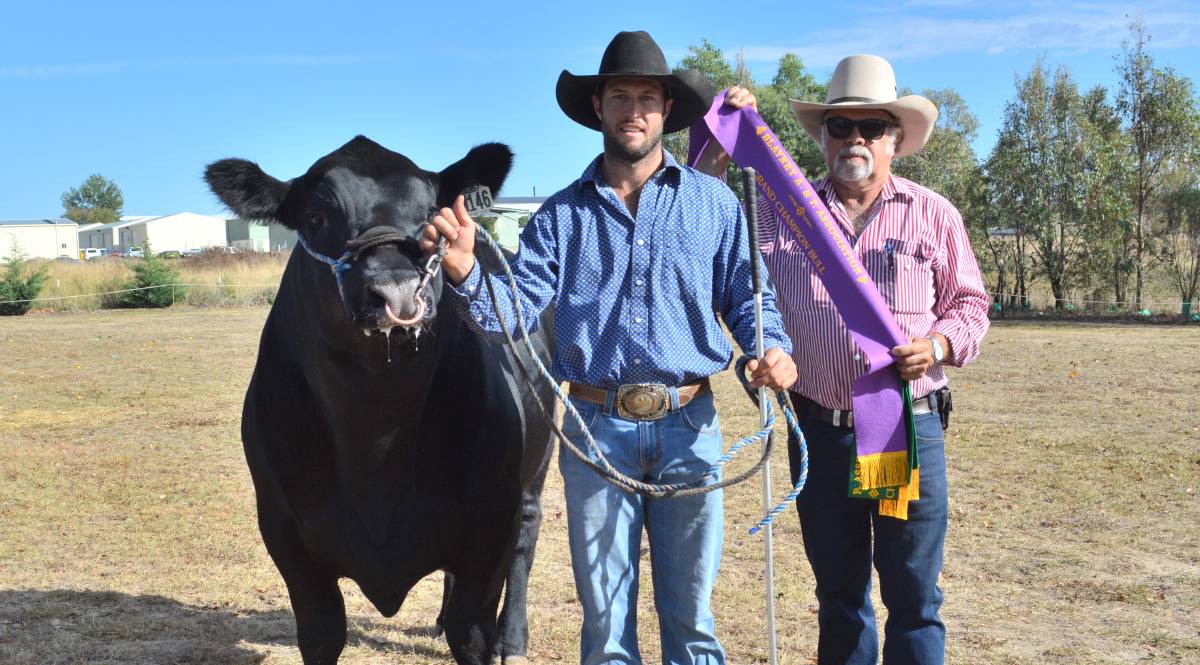 WITH the Sydney Royal Easter Show merely weeks away, and an Angus feature on the cards, it was no surprise that at this year's 141st Blayney Show over the weekend livestock entries sky rocketed.

A traditional agriculture show without the big rides and sideshow alley attractons, head cattle steward Meagan Dunford said it is this real country spirit and traditional show events that brings the people in.

"We have all the arts and craft, and needle craft along with fruit and vegetables, wool and then your equine and livestock sections," Ms Dunford said.

The Central West local show is also gaining momentum as it becomes known for its strong showing of high quality cattle destined for the Royal.

"Blayney is continually growing in its strength especially as it is one of the local shows in the lead up to Sydney that allows people to give their stock an overnight run at a show with a relaxed environment," she said.

But with the growing numbers in the livestock section comes the challenge of stalling and accommodating the increased numbers, and everything that comes with it. This is an area the Blayney Show is doing something about.

"Blayney is about to commence building of a multipurpose shed that is going to be for equine and anything anyone in the area might want to use it for at the showgrounds," Ms Dunford said.

"Equine people from various competitions and disciplines will use it for majority of the year, but it will be available for the cattle and the sheep sections next year which will accommodate for the annually growing numbers."

Among the showing of around 130 head of quality beef cattle was Millah Murrah Angus, Yamba Angus and Padua Angus studs who will all be making a come back to the Sydney show ring after years of absence.

All up in the stud cattle section nine breeds were judged by Jeremy Kensit from Jessmondeen Angus, Bathurst.

Novell N146 also teamed up with his stall mates to claim the interbreed breeder's group award.

The 10-head team from Yamba is now destined for the Angus Feature Show at Sydney which will take place on April 13 and 14.

The interbreed champion female went to Goondoola Gold M24, with six-month-old bull calf Goondoola Patriot P25 at side, who was the grand champion Red Angus female.

In the Poll Hereford section, a heifer calf Kianma Princess P007 was successful in claiming grand champion female while Llandillo Flynney was the grand champion bull.

On top of that, Ross Thompson of Millah Murrah Angus, Bathurst, was the judge of the strong showing of steers from schools throughout the Central West area including The Scots School, Bathurst, The Henry Lawson High School, Grenfell, and Blayney High School.

Coming out on top as the overall champion was the heavy weight class winner, a Limousin steer exhibited by The Scots School, Bathurst. They also showed the reserve champion.

In paraders The Henry Lawson High School student Angus Kelly, Grenfell, took out the grand champion parader award, a huge achievement considering the number of competitors and the depth of experience and skills they offered.

The sheep section had representation from a range of breeds, with good numbers considering how the season had been impacting producers.

The interbreed champion ram went to the grand champion White Suffolk ram exhibited by the Ashburnia stud of Four Mile Creek near Orange, who is only just kicking off its show career and is destined to be shown at a range of local shows including potentially the Dubbo Show in May.

The goat section had 37 entries that were judged by Margaret Brackenrig from Gulgong.

Illoura Park Madonna was selected as the senior champion doe of all breeds before going on to be awarded grand champion after going up against the kid and junior section winners.

Owner of Illoura Park stud, Jennifer Jones of Eugowra, annually exhibits at the Blayney Show and was also successful in receiving the champion and reserve champion doe kids with IP Sarzanna and IP Samantha, respectively.