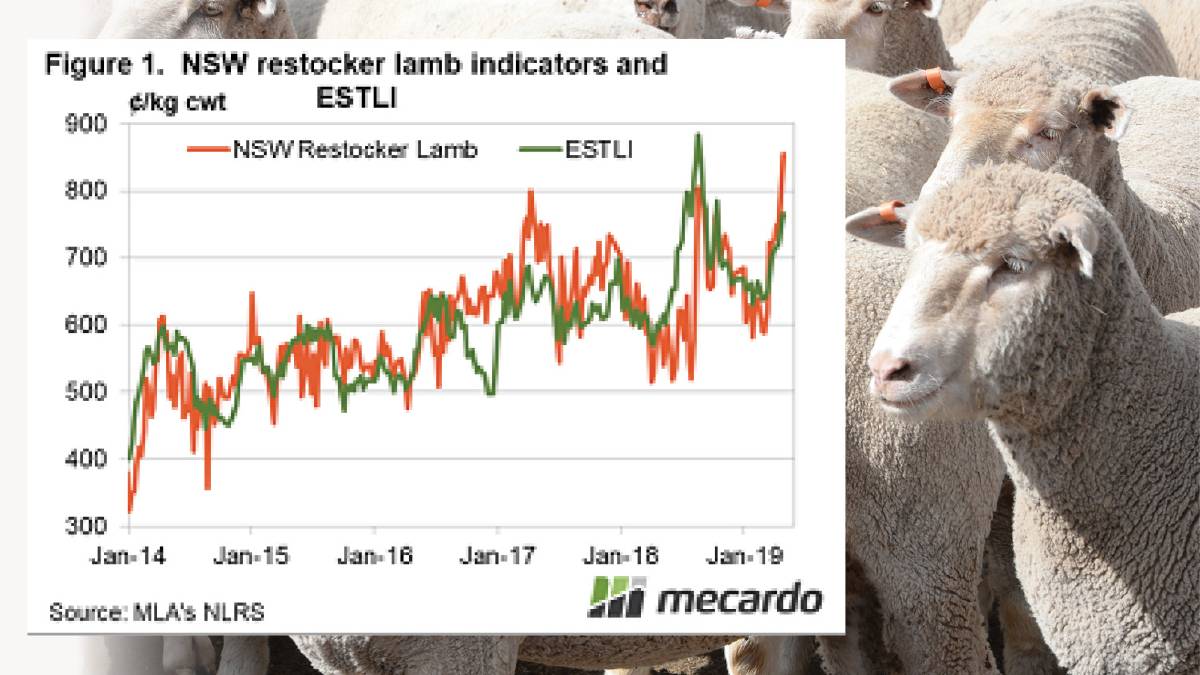 The standout in the lamb markethas been restocker lamb that is pushing well above the normal with NSW prices gaining over 100c in two weeks and 250c in the last six.

Restocker lambs the star of the show when it comes to lamb prices with recent rainfall in key sheep areas driving prices.

Recent rainfall in key sheep areas of Victoria and south east South Australia combined with tightening numbers has been the driver of the recent rally of lamb prices.

The eastern states trade lamb indicator (ESTLI) is at 758 cents per kilogram - 156c above the same time last year.

But the standout for all categories, is how high prices are compared to year-ago levels.

Restocker lambs are up 168c year-on-year, while trade and heavy lambs are both 163c above year-ago levels.

But according to the latest Mecardo report, the star of the show has been restocker lamb that is pushing well above the normal with NSW prices gaining over 100c in two weeks and 250c in the last six.

"If finished on grass, lambs bought now and sold at better than 800c should make a good margin," Mr Brown said.

At several saleyards however, restocker lambs peaked at more than 900c/kg cwt.

Across the board, rising saleyard values saw lambs sell for a saleyard record of $287 at the Ballarat prime lamb sale last week.

At Wagga Wagga saleyards on Thursday, price gains were recorded for both medium and heavy trade weight categories, with the 22-24kg lambs gaining $4 per head to average 810c/kg cwt.

In Western Australia, sheep are not cheap, but at 400c, they are a long way behind the east.

Trade Lambs are not as far behind though with the WA indicator at 703c less than 10pc behind the ESTLI.

On AuctionsPlus rainfall is being attributed for the flood of sheep and lambs onto the livestock sale platform with the online offering rising by 18,148 to 62,795 head.

The top price was achieved for a line of 225 White Suffolk cross store lambs at Nyngan, NSW.

Lamb export volumes from Australia to all destinations started 2019 strongly and in April were the second highest on record at just over 27,500 tonnes shipped weight (swt) - an increase of 22 per cent year-on-year.

Shipments to the US and China, two of Australia's largest markets for lamb, increased 23pc and 58pc year-on-year, respectively, to 5400 tonnes swt and 6700 tonnes swt.

According to Meat and Livestock Australia (MLA) this was predominantly a result of increased Australian supply, particularly of old season heavy lambs, as dry conditions across key lamb producing areas incentivised turn off.

In a recent Mercardo report international demand keeps growing, with lamb exports trending 20 per cent above the five year average and 12pc higher than in 2018.

Currently Chinese demand for Australian sheep and lamb exports sits at 25.5pc of the total 2019 volume, eclipsing the previous record of 25.3pc set in 2013.