As winter closes in, lamb prices continue to intensify as does the prevalence of old season lambs entering the market. 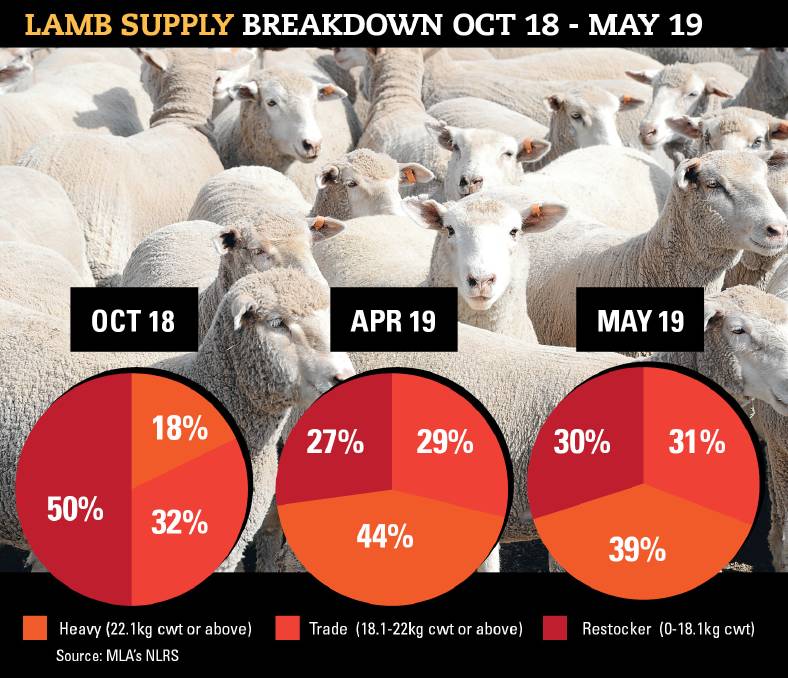 MLA has reported an increase of heavy and extra heavy lambs entering the market. This however, is expected to decline over the next few months as new season lambs begin to make their way into the market.

Tightening supplies mean lamb and mutton prices are showing no loss of pace with all categories continuing to rise.

At time of print, the eastern states trade lamb indicator (ESTLI) was 790 cents per kilogram, while heavy lamb was at 802c/kg. Mutton prices plateaued slightly after recording a 561c/kg peak late last week, although still holding steady at 545c/kg.

Although the ESTLI is trading 28 per cent higher than this year's low, and has been gaining considerable ground since March, it is yet to break all time price highs.

But according to Mecardo market analyst Matt Dalgleish seasonal percentage price patterns suggests that an ESTLI peak near 900c and a national mutton indicator (NMI) peak approaching 660c this year is not out of the question.

"After a similar first quarter trend to the 2018 season, trade lamb prices across the east coast have begun their seasonal price climb earlier than last year," Mr Dalgleish said.

"The long-term seasonal average pattern for the ESTLI highlights that prices don't usually peak until late July early August, so we may have a way to go yet for trade lamb markets.

In terms of supply however, there is an increase of heavy and extra heavy lambs entering the market.

"This is not unusual for this time of year, as the remaining old season lambs (last year) are getting close to 12- months-old and are at risk of being reclassified as mutton," Mr Cheetham said.

"Numbers of heavy lambs will generally begin to decline over the next few months as the new season lambs begin to enter the market."

Eight months ago, in October 2018, the breakdown told a different story, with just 18pc of lambs in the heavy category, 32pc trade weight and the remainder, or 50pc, were restocker lambs.

Yardings are 42pc above average with the weekly east coast lamb yarding levels for May running 20pc above the five-year average.

Sheep yarding levels during May have been trending 35pc higher than their long-term seasonal average pattern.

"The five-year average seasonal trend for lamb and sheep yardings and slaughter show a clear decline in volumes as we head towards winter, so a tightening of supply is looming," Mr Dalgleish said.

The five year average seasonal trend for lamb and sheep yardings and slaughter show a clear decline in volumes as we head towards winter, so a tightening of supply is looming - Matt Dalgleish, Mecardo analyst

"A weakening Australian dollar, down around 3.5pc over the last month and trading below US70, combined with robust offshore demand for Aussie lamb and sheep exports should continue to provide solid price support across ovine markets in the coming weeks."

The recent lamb and mutton over the hook (OTH) indicators across the eastern states, despite steady slaughter numbers, are also trending higher.

SA has seen the largest improvement for the year-to-date, up 43c since January.

The difficult season however is still forcing farmers to consider their stocking options ahead of the winter months.

An example of this is the number of sheep on offer through AuctionsPlus jumping considerably to 62,795 head last week.