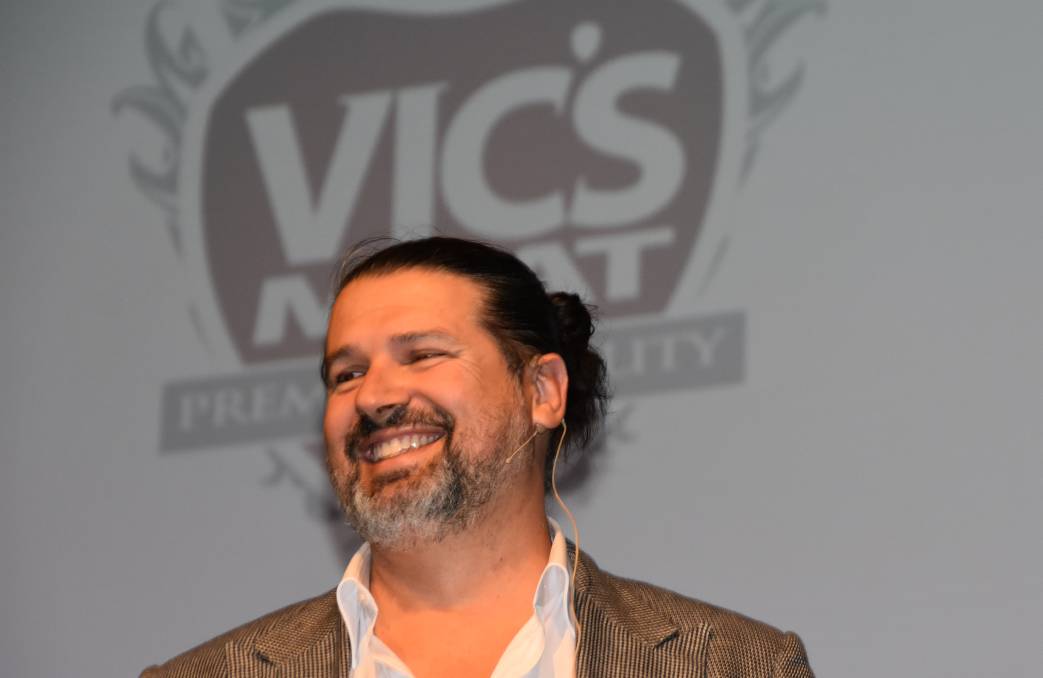 THANK YOU: Sydney celebrity butcher, Anthony Puharich, from Vic's Meat, says not enough is being done to celebrate the hard work and success of farmers.

A national Angus conference in Albury has been told the runaway success of Angus beef may be its single biggest risk.

A Melbourne celebrity chef and a high-profile Sydney butcher have warned Angus breeders to protect the hard-won reputation of their beef as a premium quality meat.

Anthony Puharich, owner and butcher-in-chief at Vic's Premium Quality Meat and Victor Churchill Butchery in Sydney, said all the hard work by breeders to grow a high quality product could be lost "with a single stroke of the pen" by chefs and butchers falsely claiming the beef on their menus and in their shops was Angus.

Mr Puharich said truth in labelling, food provenance and traceability were going to be major issues in the coming decade as consumers became more educated and more interested in where their food had come from and how it was produced.

"The thirst for more information from consumers is phenomenal," he said.

Adrian Richardson, owner of La Luna Bistro in Melbourne and a television celebrity chef with a passion for beef, said the recent proliferation of Angus brands wasn't a danger as long as the beef was always genuine, top-quality Angus.

On that score they both doubted the value of having fast-food giant, McDonald's, selling and promoting Angus burgers.

The pair were speakers at this week's Angus national conference in Albury which is also a celebration of the 100th anniversary of Angus Australia. EDUCATING CONSUMERS: Celebrity Melbourne chef, Adrian Richardson, said he was happy to educate people on how to better cook beef because that meant they wouldn't be eating boring chicken.

Both hailed the quality of Angus beef and the key role it was playing in the success of their businesses.

Speaking on a panel at the end of the first day of the conference which included Jason Strong, the CEO of Meat and Livestock Australia, Mr Puharich said celebrity butchers and chefs like he and Mr Richardson were in the public limelight but the forgotten heroes were the beef producers.

He took a swipe at MLA for not doing enough to highlight the hard work and success of beef producers in its advertising and promotion.

"The MLA might spend millions of dollars on really funny ads once a year on Australia Day but not once is a farmer mentioned. Without these guys we have got nothing," he said.

"We don't celebrate these guys enough, at the end of the day this country has the hardest working and the most innovative producers in the world."

Mr Strong said MLA promotion was working well and the standing of beef producers among consumers had never been higher.

But he conceded MLA needed to communicate much better with its levy payers.

The panel spent time discussing the disconnect between most players along the beef supply chain and the ongoing impact this was having on sharing the rewards for producing and delivering high quality product to consumers.

Mr Strong said this lack of connection was a fundamental problems in transforming the beef supply chain into a value chain where everybody shared in the rewards for producing the right product.