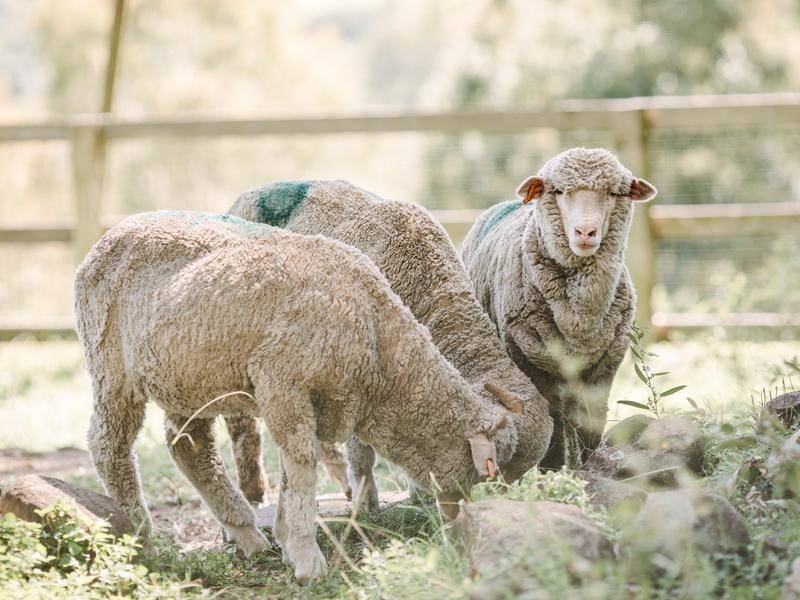 Protesters have been fined after 'liberating' three sheep from a Queensland abattoir.

None of their convictions were recorded.

Eight activists were each fined between $400 and $600 on Thursday after pleading guilty in Brisbane Magistrates Court to trespassing on agricultural properties last month.

None of their convictions were recorded.

Melissa Joan Donald called police just after midnight on April 13 from a farm near Toowoomba complaining she was being chased by a farmer on quad bike who was shooting at her.

Officers found her after an hour of searching in a paddock, where she told them she was "there to see the cows".

"I just want to make clear that Melissa Donald called police herself because she was frightened," defence lawyer Mark Glaser said.

"She waited for police and was then arrested."

Five days earlier, staff at a Warwick abattoir turned up to work about 3.20am to find 21 activists, 18 of them chained to equipment.

Police were called, with the protest group showing them previously taken video depicting the slaughter of livestock.

"A spokesperson told the manager of the abattoir that they would leave peacefully if he would supply them with three lives, being sheep, that they could save," police prosecutor Kathy Clark said.

"At that time, they did not offer any payment for the sheep and the manager agreed to provide the sheep to facilitate them leaving the place."

They were also each ordered to pay the abattoir $180 in restitution.

In handing down his sentence, magistrate Jason Schubert considered their lack of criminal history and "otherwise good character".

"There's clearly a right for persons to hold peaceful protests. That does not extend to a right to trespass on to another person's property or interfere with their business activities," Mr Schubert said.

"The request for ... three sheep is effectively an act of extortion."

After a spate of animal rights protests on farms and abattoirs, the state government last month allowed police and biosecurity officers to issue on-the-spot fines of $652.17 to activists on top of penalties for trespassing.

Mr Glaser said police initially told the group at Warwick they would be let off with a warning but they were "later charged".

He also said after being handed a curfew as part of bail conditions, Carmichael was visited by police five times between midnight and 4am "in a short period of time".

Outside court, Orr, who was recently convicted of similar offending, said she wanted "the focus back on the animals, not the activists".