Hopefully, these projections are proven correct. However, the flock can't grow without some sheep being held back on-farm.

In the Australian flock, the swing factor in terms of sheep numbers is the number of adult sheep sent to abattoirs, which obviously don't return to production.

Sheep offtake is the annual sales of adult sheep to abattoirs expressed as a proportion of the flock size (figure 1). 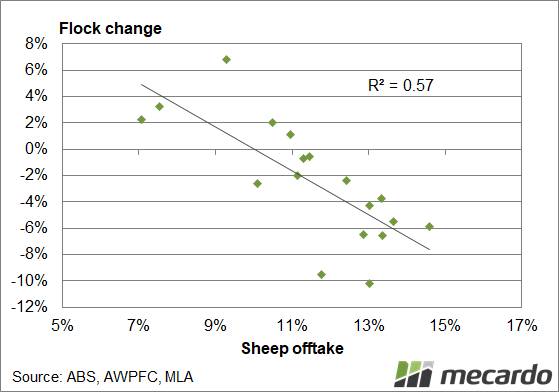 As a rule, the sheep offtake has to be below 10 per cent before the flock can grow.

Somewhere in the 10-12pc is a "neutral" sheep offtake and above 12pc the flock is probably shrinking.

The catch is MLA forecast the sheep offtake to be about 10.5pc, with the lamb offtake slightly lower in the 31-32pc range.

For the flock to grow the sheep offtake will have to be a good 2-4pc lower than these projections, which with a flock around 65 million, translates into lower adult sheep sales of 1.3 to 2.6 million.

For farmers, this will translate into stronger mutton prices in relation to lamb and higher store sheep prices. 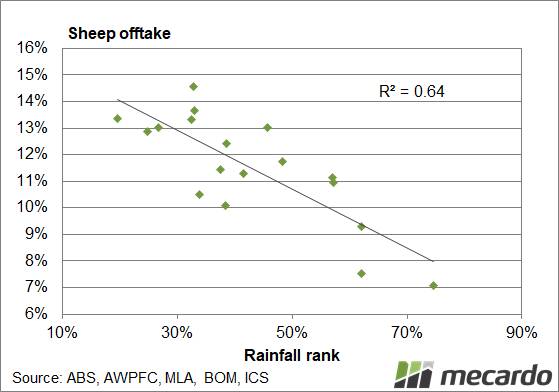 FIGURE 2: Sheep offtake and rainfall rank. This chart shows the average (weighted) rainfall 12 month rank for sheep regions with the annual sheep offtake since 2002. It's a key factor in determining whether the flock will grow.

The prospect of a growing flock is a welcome prospect, as the industry cannot continue to underpin higher sheep meat and Merino wool prices with lower supply on an international scale.

Rainfall or seasonal conditions have been the key driver of sheep offtake, accounting for two thirds of the number of sheep sent to abattoirs.

The 12 month rainfall rank for the current season to date is running at a low 0.2.

For the flock to start picking up we need the rainfall rank to rise above median (0.5) and ideally stay there for a couple of years.

Until it does the sheep offtake is likely, at best, to stay in the neutral (10-12pc) level.

The story Increase in the flock remains a hostage to rainfall first appeared on Farm Online.