April has seen another record month of female cattle slaughter, suggesting producers are still well and truly in liquidation mode.

In the month of April, 58 per cent of cattle slaughtered were female.

Considering female slaughter was much higher, it means male slaughter had to be lower. In fact, there were 11pc fewer steers and bulls killed in April than the same month in 2018.

We seem to be seeing the impact of the reduction in cow herd flowing through to male cattle slaughter, which for the year to date is down 5pc.

For the time being, cattle and beef supply is being propped up by females. When female slaughter moves back under 47pc and the herd rebuild kicks off, cattle slaughter is going to have to decline markedly. 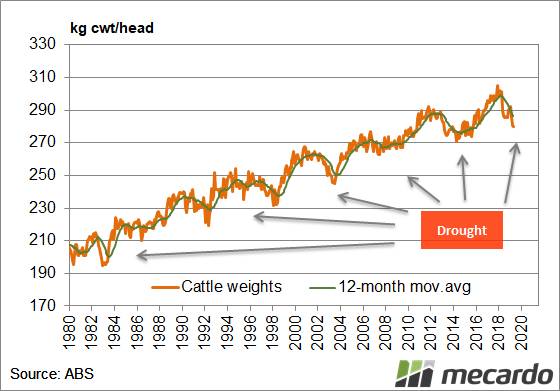 Cattle carcase weights also point to an increase in the pace of herd liquidation.

The record numbers coming out of feedlots still have carcase weights running ahead of previous drought levels.

In 2014 carcase weights got as low as 270 kilograms a head, and it doesn't look like we are going to get there this time.

The current round of herd liquidation has been going on since February last year and is showing no signs of abating.

The latest three month outlook from the Bureau of Meteorology (BOM) is less than promising for winter rainfall, so cows might continue to come to the market.

Finished cattle supplies are not going to improve, and steer supply might continue to wane. This will keep slaughter prices at the stronger end, but it will be cows and breeders which will find serious strength if and when seasons improve.