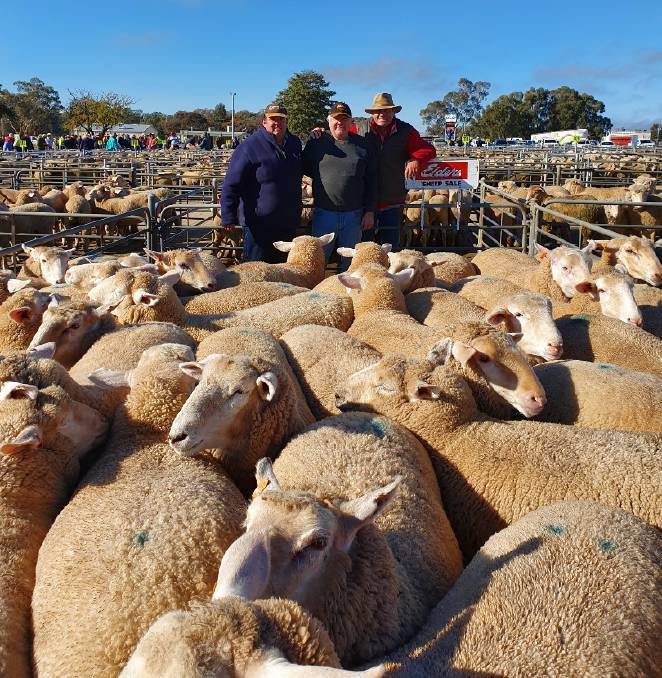 Goulburn prime lamb breeder, Joe Mooney, was keen to break the prime lamb record, and he did at $354.20.

It was the second time in a week and achieved with a pen of extremely heavy lambs at Wagga Wagga on Thursday morning.

The price was received for a pen of second-cross Composite lambs weighing in from 95 kilograms to 105 kilograms live-weight to average 102kg and possibly as much as 48 kilograms dressed and purchased by Fletcher International of Dubbo.

Mr Mooney has run a Composite breeding program with his wife, Julie at Woodbrook, Currawang , between Tarago and Collector, and joins his rams to Merino ewes for a first-cross ewe of which they run 700 head as well as 2000 Merino ewes.

The first-cross ewe is joined to a Composite ram for the second-cross production that broke the record.

Normally selling over the hook through Southern Meats, Mr Mooney said the money was at saleyards this year, hence selling at Wagga.

"These were a cut of our lambs and we have another three loads to market," he said.

"I reckoned I had the lambs to break the record, so went to Wagga. We're pretty happy with ourselves, agents and buyer."

I'll probably only have the record for a day, but at least I can say we did break the record."

Landmark Wagga livestock agent and auctioneer Peter Cabot was at the rail and took the bids. He has been at the rail before when records were set.

And while the market keeps rising for these stand-out export pens he said it was difficult to predict how high prices might go.

Mr Cabot said the market was similar in price to last week. He confirmed few people in the industry would have seen lambs that big before.

There was the odd joke bandied around that the lambs were more like woolly cows.

Mr Cabot didn't like to say how soon, or if, another record will be broken. But now all eyes will turn to the Griffith market on Friday. Griffith is no stranger to national lamb records and it is just a matter of a pen being offered that meets the market specifications.

The results on Thursday followed from the record at Corowa on Monday for Walla Walla vendors the Mickan Brothers.