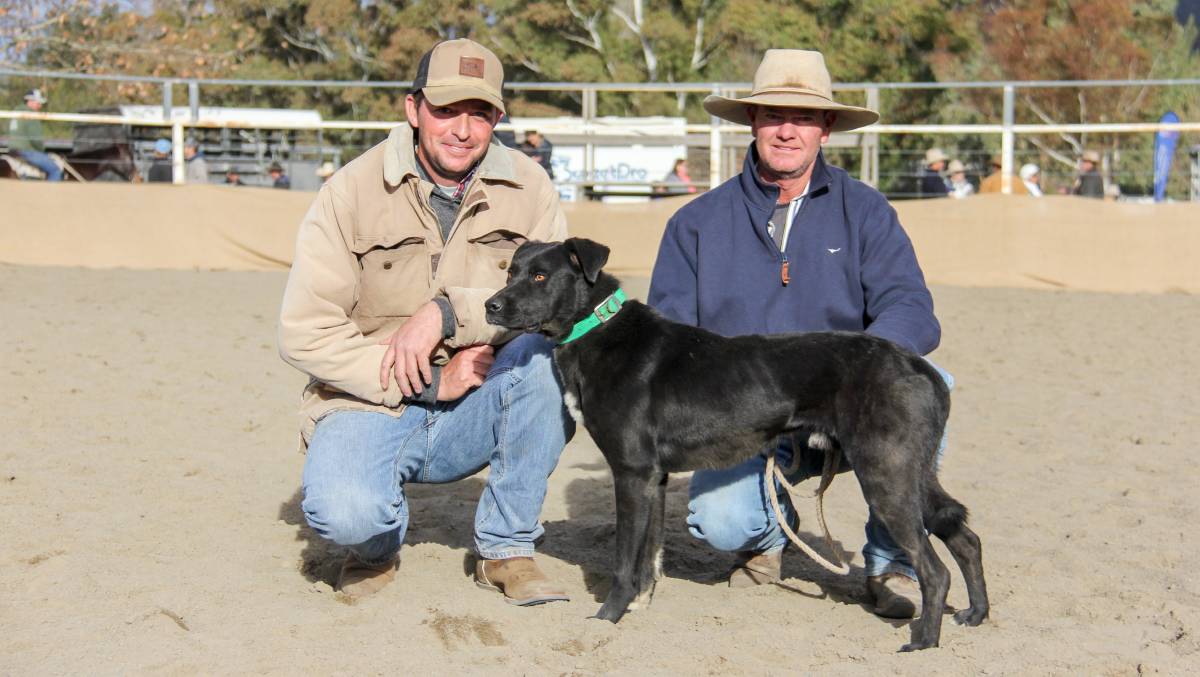 Working dogs and pups were on offer.

A two-year-old dog called Riv topped the National Working Stock Dog sale in Murrurundi on Saturday when he sold for $7000.

At the fall of the hammer, 30 of 41 dogs sold for a total average of $2923, during a sale which attracted buyers from Queensland, NSW, Victoria and South Australia.

In a further breakdown, 22 of 32 dogs averaged $3522 while eight of nine pups sold and averaged $1275. An additional seven animals were sold after the sale had concluded.

Offered by Chris Edmunds, Bathurst, the top price black male dog was by Keats Kelly and out of a station bred female.

He was initially passed in for $5000 but was finalised for $7000 by purchaser Steve Reibel, Merriwa, before the sale concluded.

Riv had been contract mustering throughout NSW on cows and calves and weaner breaking and was set to do similar work with his new owner.

Mr Edmunds said he was happy to take the dog home if he didn't find the price he was after.

While Mr Edmunds competes in yard and cattle dog trials, Riv was just a straight worker.

It was those qualities that attracted purchaser Mr Reibel who said he didn't usually spend so much on dogs.

"I saw him through the catalogue," he said.

The second top price of $6500 was paid by SS Neilson, Rockhampton, Qld, for Capree Woody, a male red and tan dog offered by Lane Pendergast.

The three-year-old dog was by Claselle Toss and our of Capree Busy 2.

That money was also paid for Wrobel's Tye, offered by Adam Wrobel and purchased by Wayne McDonald, Orange.

Tye had already placed second in an open trial and was by Peppercorn Tick out of Glenfaba Catie.

The top price pup was six-month-old cream male, Glenfaba Chalk, offered by P and A Crowe who sold to Tim Fincham, Vic, for $3300.

Davidson Cameron Clydsdale Taylor and Co agent Dean Taylor said it was a strong result given the season, especially the final average for dogs, which after the auction was $3403 for 28 dogs.

"The vendors were quite happy, everyone seemed pretty happy given the season," he said.

Saturday also saw the running of the National Working Stock Dog Futurity, which was won by Grant Miles and his dog Sarge on 178 points.

Second place was Charlie Brummell with Bunyah Sue on 176 points and third was Zac Ede with Bunyah Lenny on 170 points.

Read the full report in next week's The Land.