QUALITY: The Angus cattle at Montrose, Currawang, NSW, are bred for their quiet temperament, depth of body, plus length, structure and muscle.

Re-directing cattle to an online selling strategy worked a treat for John Fisher.

WHEN it doesn't rain, no amount of blue-sky dreaming seems to turn it around.

John Fisher doesn't cross fingers or read tea leaves in the hope of more moisture; he adapts his cattle management strategy in the face of drought.

Mr Fisher and his wife, Ann-Maree, run, Montrose, a property located between Tarago and Collector on the northern side of Lake George at Currawang, NSW.

The operation is also a partnership with Mr Fisher's parents, John and Anne.

"We normally run about 160 breeders along with 1300 first-cross ewes," Mr Fisher said.

The ongoing drought and cost of feed were two factors that prompted the Fishers to rethink their selling direction.

"Selling stock with the past two years of drought has come with its own challenges," Mr Fisher said.

"Cows which have had to be sold have gone to weekly SELX (South Eastern Livestock Exchange) sales at Yass or Moss Vale.

This year they chose to put the cattle onto oat crops in order to value add and then sold them on Auctions Plus, aiming for that late June/July window where numbers were in short supply. 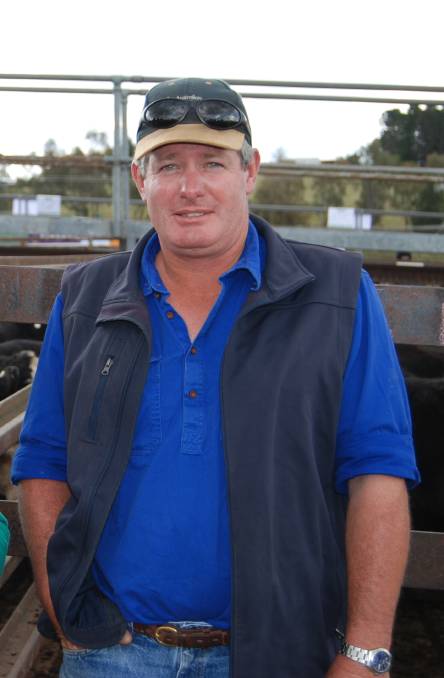 That alternative thinking when it comes to agricultural decision-making holds Mr Fisher in good stead for another role he has, managing cattle properties for Sydney-based clients.

Apart from his own property, his farm management business sees him looking after six other properties ranging from 486 hectares (1200 acres) to 202ha (500ac).

"With all properties combined, there are about 800 breeders and we're trading 400 to 500 steers," Mr Fisher said.

These properties all run Angus-based herds which work in well with Mr Fisher's own operation.

The family has a history of being willing to change something up or try something different when climatic conditions altered.

His father originally ran a Shorthorn stud, which finished in the early 1970s.

We have found Angus cattle always have a market for the product, no matter what the season. - John Fisher, Montrose, Currawang, NSW

"The stud was sold due to drought. A number of years later we ventured into Herefords and tried to value add with Simmental bulls for hybrid vigour," Mr Fisher said.

"At the same time, there was a very strong demand for Angus, as is the case now."

This led to a very special long-term relationship with a Cootamundra-based Angus stud.

"We followed this trend and moved to Angus cattle with bulls sourced through Doug and Barbara Tozer, of Onslow Stud, and we have been with Onslow bloodlines for nearly 30 years," Mr Fisher said.

"We have found Angus cattle always have a market for the product, no matter what the season."

All the breeders on Mr Fisher's managed properties are based on Onslow bloodlines which have been developed over a period of many years through bull purchases.

Mr Fisher is open about the traits he's pursuing for the cattle under his care, citing a quiet temperament, depth of body, length and good structure with good bone and muscle as "must-have" boxes to be ticked.

The Angus breed in Australia and overseas appears to continue to grow stronger with increased demand from all areas, including China. The future is looking positive. - John Fisher, Montrose, Currawang, NSW

"Doug has helped with decision making of bulls bought for heifers and with our own cattle, as well as for the clients I manage," he said.

"Issues with heifer calving have reduced significantly which is always a positive outcome reducing losses."

The future of Australia's Angus production continues to both fulfil and hold great promise, according to Mr Fisher.

"The Angus breed in Australia and overseas appears to continue to grow stronger with increased demand from all areas, including China," he said.

"The future is looking positive."

It may be dry but well thought-out water infrastructure on Montrose and the other managed properties have come to the fore.

"All properties have dams however I have ensured water supply is backed up with water troughs run from bores," Mr Fisher said.

"The bores are at 70 to 120m and provide cleaner water and mineral content which add to the weight gain in stock."