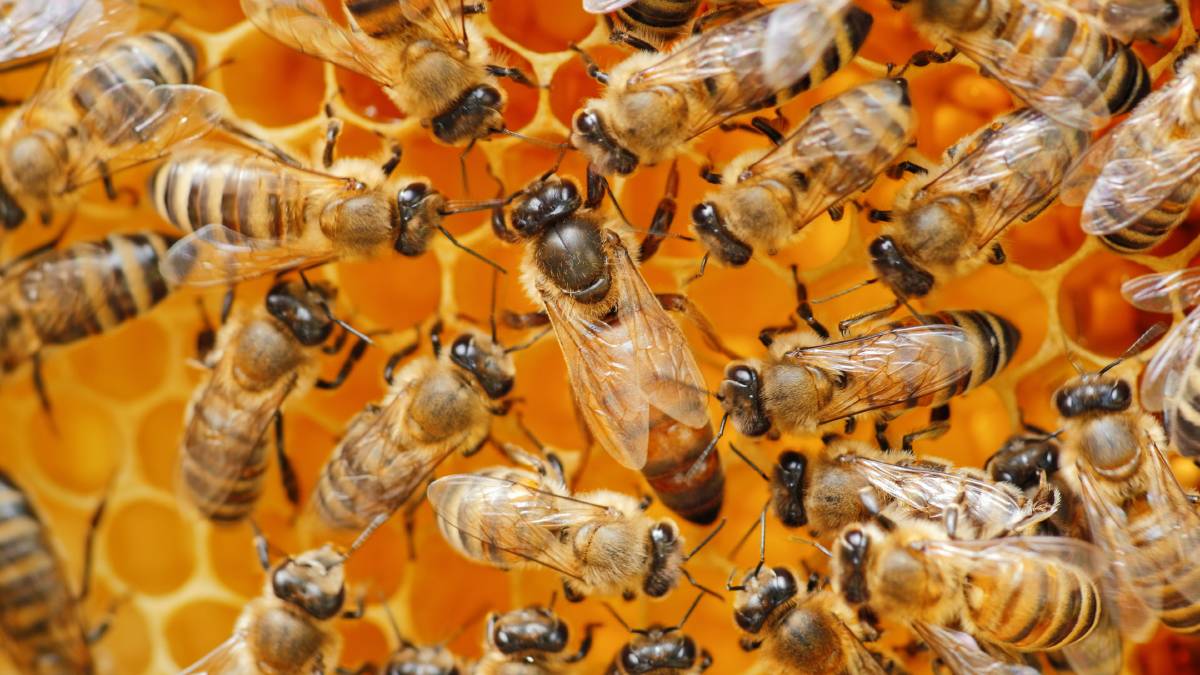 QUEEN BEE: Every bee needs the community of the hive to survive, including the queen.

Most Australian native bees are solitary, living and working alone, but the native stingless bee and the European honey bee are social insects, living in a community.

A single honey bee is just one unit in that community and dependent upon it to survive.

She cannot live alone. Her whole life is devoted to the welfare of the colony, toiling with successive job descriptions eventually working herself to death at the end of her six weeks her life.

The queen is popularly regarded as the ruler of the colony, and indeed she is, but in an indirect way. She 'governs' the colony, not by edict and enforcing laws, but by smell.

She exudes pheromones, which are like hormones, that affect and control other members of the colony.

Worker bees groom and feed her and in doing so are exposed to her pheromones which they spread through the colony as they move around the hive doing their work. Different smelling pheromones control different functions of the working masses.

Major activities of the colony are guided not by royal decree, but by consensus of the corporate body in response to the levels of pheromone throughout the hive, but there comes a time for change.

When the queen gets old, her pheromone production drops.

When the colony is thriving, increasing in numbers to the point of overcrowding, the pheromone level is diluted.

When the beekeeper accidentally squashes her, the level disappears suddenly.

Such events stimulate the working masses to activity. It is 'election day' - time for change in leadership, time for a new queen.

Just who or which bee instigates the processes that follow is a mystery, but some research suggests it is the younger bees, the nursery bees responsible for feeding larvae, the queen and drones, who make the decision and start the action.

After all, they 'know' best if the hive 'economy' is failing. And so the process of making a new queen begins. This is possible provided the bees have the old queen's eggs or very young larvae.

A large, vertically hanging beeswax mammiform structure is built over the honeycomb cell containing the larva which is then given special food including extra royal jelly, but without plant flavonoids contained in 'bee bread', the diet of larvae destined to be worker bees.

There are differences in the number and site of queen cells depending on the circumstances in the colony, which necessitated the production of a new queen.

If the queen has suddenly died, the matter is urgent and the new queen cell appears in the middle of the comb, presumably using the most available and suitable egg or larva to overcome this emergency.

When the old queen is simply failing, there is no hurry and for some reason the bees make more of the exercise.

They use an egg or larva anywhere in the comb but for some reason they flatten out the honeycomb cells around it so it stands out in splendid isolation.

With overcrowding the process is more dramatic.

With the clear intention of producing more than one queen, multiple queen cells are built, usually along the bottom bar of the honeycomb frame.

After 16 days the new queen emerges. If multiple queens have been bred, what happens is the autocratic dawn of a new dictatorship, for there can be only one queen.

The one emerging first will use her sting to kill the others by stinging the ones unhatched or, if two emerge together, by fighting to the death.

Perhaps this explains why the bees make multiple cells for the fight may result in death or damage to both.

The successfully emerged queen is virgin, and after maturing a few days she flies out of the hive on multiple mating flights to mate on the wing with 15 to 30 drones from other colonies.

Such promiscuity is of vital importance to assure maintenance of healthy biodiversity in the colony the queen is about to 'rule'.

If the original situation was queen failure or death, the new youngster will assume the role of queen, laying eggs and exuding pheromones.

If it was overcrowding which necessitated change, the old queen would have already left the hive with half the worker bees and the new one must get on with laying lots of eggs to build up the swarm again.

So is a colony of honey bees democratic or autocratic? I think a mixture of both.