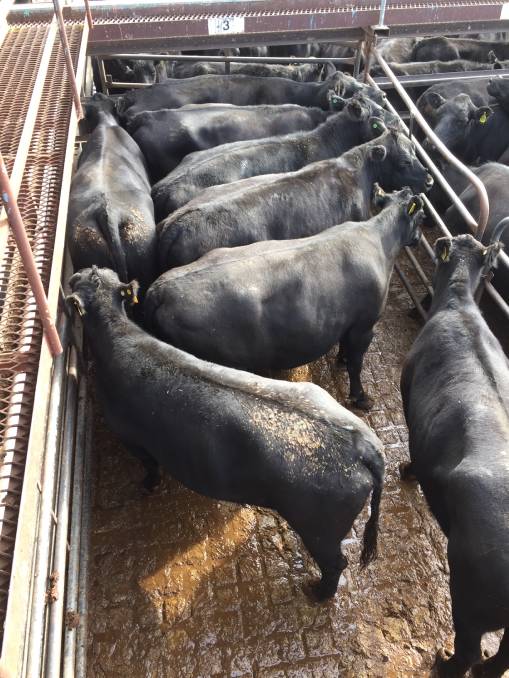 Good conditioned cows are attracting a solid dollar as southern processors come north in search of supply. There are a lucky few who can benefit.

Patchy success from winter cropping has created a run of better conditioned prime cattle in locations such as Wagga Wagga and Gunnedah.

This week, prices at those two centres jumped 25 cents a kilogram for feeder weight milk-tooth heifers and as much as 50c/kg for prime cows.

Victorian processors short on supply are driving demand in the NSW market, as they do every year at this time. A lack of production from drought has only exacerbated the situation.

Lot feeders have lowered the weight requirement and suitable heifers above 300kg brought up to 305c/kg compared to 275c/kg in June.

"It comes down to sheer supply," he said. "If you travel west or north from here conditions get ordinary very quickly."

Bathurst agent David Smith welcomed the mid-winter interest from southern processors and said prices for those lucky cattle on oats were making 280c/kg to 290c/kg, with heifers making 250c/kg to 260c/kg, a rise of more than 50c/kg compared to a few weeks ago.

At Gunnedah good winter crop conditions east of that centre have also produced a spike in quality, with prices reflecting buyer demand.

However, pens of cattle from Barraba and Bingara, among the hardest hit by drought, showed another side of the northern market.

At Inverell producers continue to struggle in spite of light yearlings up by 60c/kg to 80c/kg. "Certainly prices are dearer this week but we are struggling with limited numbers of heavier stock in forward condition," said agent Robbie Bloch, CL Squires and Co.

In the Hunter Valley, the prime sale at Maitland recorded better prices than last week's store sale at Gloucester, which was no surprise given the lack of grass. Just because a selling centre is on the coast doesn't mean it has benefited from moisture.

At Casino, which is among the lucky locations with winter oats growing like summer corn, pens of cattle remain mixed with country to the west of Casino and Kyogle still in a struggle for water.

"There are people trying to get weight into their calves to meet the market but there's not many," said agent Darren Perkins, George and Fuhrmann. "With grain at record prices there is no incentive for producers here to feed."

Meanwhile, all eyes are on a good crop of grain - and stubble - likely to come out of South Australia in the spring which will boost feed supplies going into summer.

Sponsored by
Great success for small Poll Merino stud
Test
Beef, sheep and goat producers were given the latest regionally relevant insights.
Test
Almost all of NSW will see some rain this week as a north west cloudband sweeps across the state.
Test
China's demand on global markets will be sufficient to support all grain prices.
Test
JBS grass-fed program now has framework to ensure on-farm practices meet emerging consumer demands.
Test
What's a day in the life of a Clergate Public School student? James is here to tell us.
Test
State Government dissaray as Health Minister forced into isolation
Test
The NSW Government has today started to process previously successful rebate applications as part of the Emergency Water Infrastructure Rebates Round 1 ahead of Round 2 going live on July 1 2021.
Test