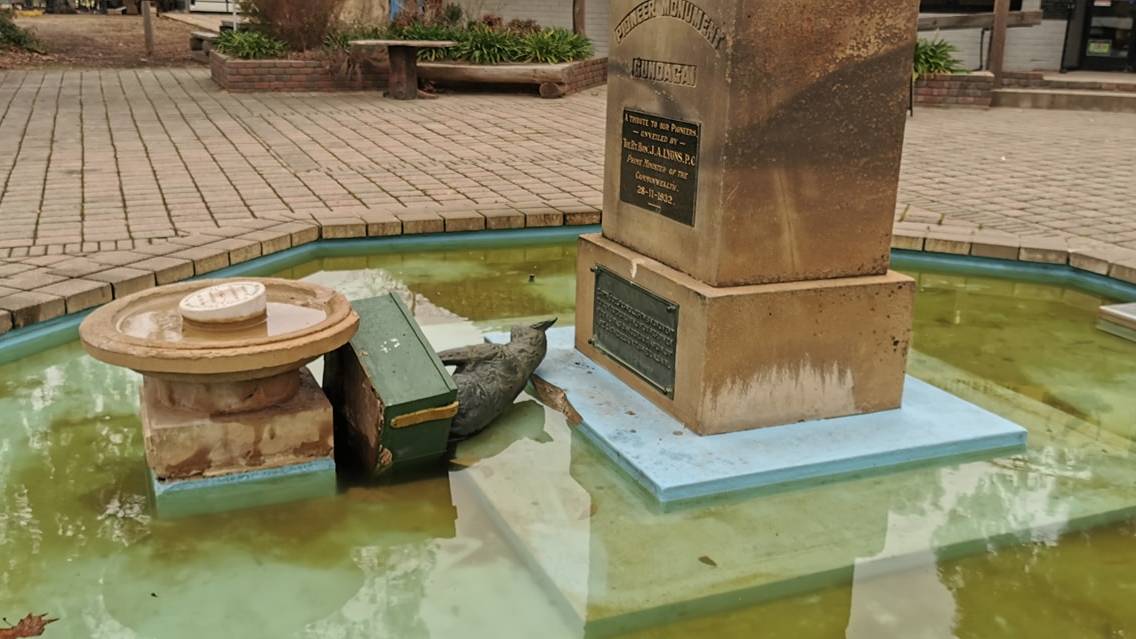 Sad sight: Troublemakers left Gundagai's famous dog and its tuckerbox in the wishing well below its plinth after toppling it on Saturday afternoon. Picture: LOST GUNDAGAI FACEBOOK

A MAN has given himself up for allegedly vandalising the dog on the tuckerbox on Saturday.

A WAGGA man has handed himself in to police for allegedly vandalising Gundagai's iconic dog on the tuckerbox.

The 28-year-old was taken into custody at Wagga Police Station and was charged with one count of destroy or damage to property.

The man has been granted conditional bail and is due to face Wagga Local Court on September 11.

A motorist traveling along the side of the Hume Highway, Gundagai, noticed a man vandalising the statue about 4pm on Saturday.

On Monday morning police had released images of people "who could assist" an investigation into vandalism of the dog on the tuckerbox statue at Gundagai.

The photos were of a man and a woman.

The man was described as being of medium build with black hair. He was depicted in the image wearing a black jumper, light tracksuit pants and black glasses.

The woman was described as being of thin build with dark hair.

She was pictured wearing blue jeans, a black top and brown jacket.

The dog and tuckerbox were dislodged from the base of the statue, falling into the surrounding fountain.

"This is a famous landmark . . . real Australia. What's wrong with some people?" he stated on social media.

"Just spoke to (Cootamundra-Gundagai) Mayor Abb McAlister who said the community was upset about what's happened to their dog on the tuckerbox.

"The statue has lost an ear and had his nose damaged in a weekend incident. As Abb put it: 'For the people of Gundagai he's part of your family. He's your mate'."

THE Dog on the Tuckerbox monument north of Gundagai has been vandalised.

The sculptured canine and food container was knocked from its plinth, landing in the wishing well below.

One of the dog's ears was smashed off in the process, but was found at the scene.

Police are seeking a couple alleged to have toppled the statue at 4pm Saturday before driving away in a black Hyundai Santa Fe. 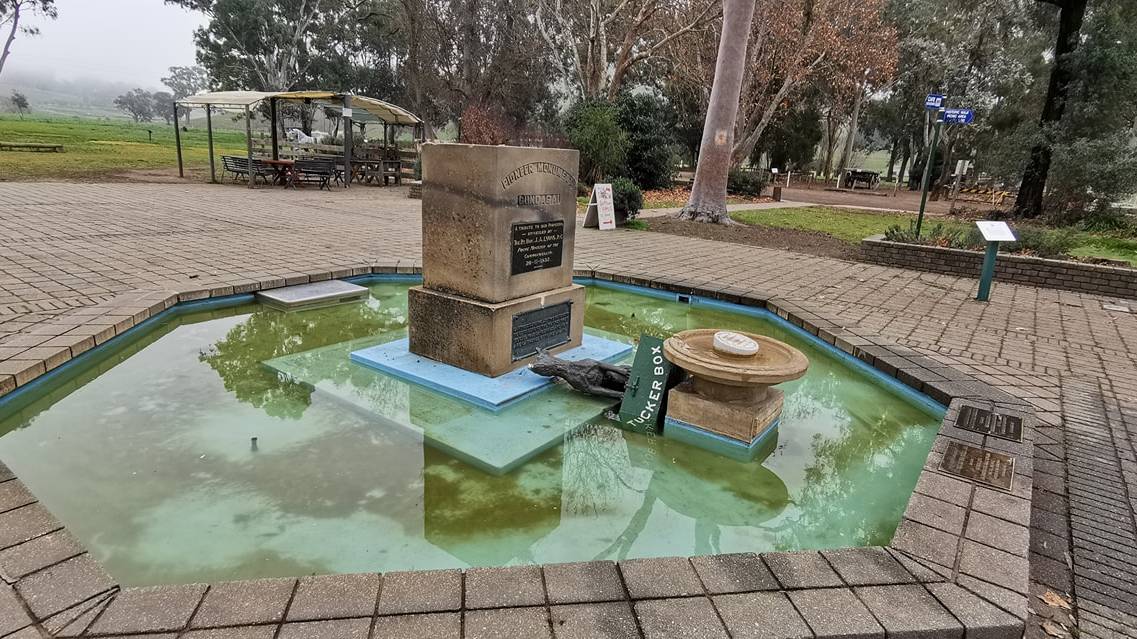 Knockout blow: The wishing well houses the dog and the tuckerbox after they were felled. Picture: LOST GUNDAGAI FACEBOOK

It is unclear in which the direction the man and woman headed.

It is hoped the statue will be repaired before a new tenant takes over the nearby souvenir shop on August 10.