Defying the dry conditions, Knowla Livestock had 100 per cent clearance with many bulls remaining locally in the Moppy district, near Gloucester.

Mother Nature might not be supporting Knowla Livestock but the local community certainly did when the Laurie family held their annual sale.

Defying the dry conditions, Knowla Livestock had 100 per cent clearance with many bulls remaining locally in the Moppy district, near Gloucester.

"We've had no help from the weather, but plenty from the community," said Knowla stud co-principal James Laurie.

The 17-month-old son of Dunoon Kind K1354 from and Knowla Panda K03 weighed 736 kilograms with a scrotal circumference measurement of 44 centimetres.

"We are a relatively young operation established three to four years ago and Knowla are the best stud in the local district," said Mill Creek Angus operation's manager Ben Pritchard.

"Like any beef producer, we are always looking to improve our genetics to produce better beef and better product for the market. This bull will add a lot more power to our current operation." "I'm a strong believer in one bull per 25 cows and I've bought from Knowla before, they have good calving rate and they perform well," Bruce Mackenzie from Macka's Pastoral said.

Repeat buyers were Mark and Wendy Vaile of Cedar Party, who purchased three bulls to a top of $12,000 for Knowla Patriot P28. 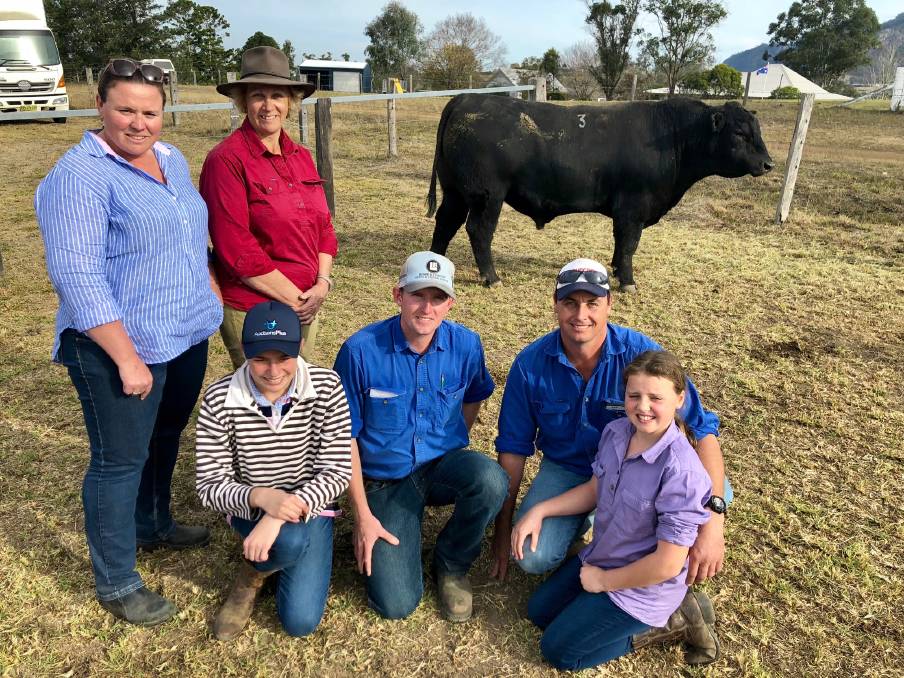 Before the sale, co-principal Ted Laurie said the cattle market was going ahead in leaps and bounds with world demand high for good quality Australian produce.

"We have lots of good cattle in the market, we just need help from the weather," Mr Laurie said.

Mr Laurie said for the first year they have used genomics and sire verification for all sire bulls.

"We are excited to use the science in breeding cattle so we can do a good job for you as breeders," Mr Laurie said.

His brother James Laurie said after the sale that to get 100pc clearance in this climate was "phenomenal".

"It probably just shows the underlying confidence in both the cattle industry and our program at Knowla," Mr Laurie said.

All 110 un-joined Angus yearling heifers offered were sold to average $1190.

The Johnston family, Invergordon, Gloucester, paid to a top of $1500 a head for a pen of 15- to 16-month-old commercial heifers.

They also purchased two bulls, including Knowla National N154 and Knowla Nobleman N209, paying $8000 for each.

The sale was conducted by Elders Walcha with Paul Dooley, Tamworth, as the auctioneer.