Wait until you see the difference 34 years makes.

This is now officially the worst drought on record with BOM climatologist David Jones saying the drought has now exceeded the Federation Drought, the WWII drought and the Millennium drought in terms of its severity through the Murray Darling Basin.

So we thought we'd take a look across the nation at how the drought has impacted using Google Earth Engine's Timelapse tool of satellite images.

We know the Millennium drought was bad, but as the images clearly show, it's drier now than then.

However, while the current predicament draws comparisons with the other prolonged dry run in most recent living memory, the Millennium Drought between 1997 and 2009.

But it's difficult to compare the two situations on equal terms, as the severity of drought depends on so many different social, economic and geographic factors.

While the Millenium Drought is described as a decade of drought, not every season was exceptionally dry.

Zoom in on your local area and see the changes by moving the date on the bar in this graphic below. Story continues after the graphic.

However, when it did rain, as the Bureau of Meteorology notes, there were two exceptionally wet La Nina years that brought the drought to an end with floods.

When it does eventually rain, it will take months of above average falls to break the punishing drought gripping large swathes of eastern and southern Australia.

Unfortunately there is not much hope for significant rain in the next three months.

The Indian Ocean Dipole has tripped into unwelcome positive territory while the El Nino - La Nina Southern Oscillation Index outlook is neutral and not likely to push the East Coast into or out of drought. How some of the dams across the country were looking in 2018.

That means the August to October climate outlook is for a drier than average three months for most of the country, with higher than average daytime temperatures and below average rainfall.

The current rainfall deficiencies have been building since the beginning of 2017 - except for parts of Victoria, Southern NSW and Northern Queensland.

We've looked previously at how NSW's dams have taken a hit in the drought. Below are some images of water storages and how water levels have fluctuated across the years from 1984 to 2018.

As a result, the Northern and Southern Murray Darling Basin has been exceptionally dry for a couple of years. 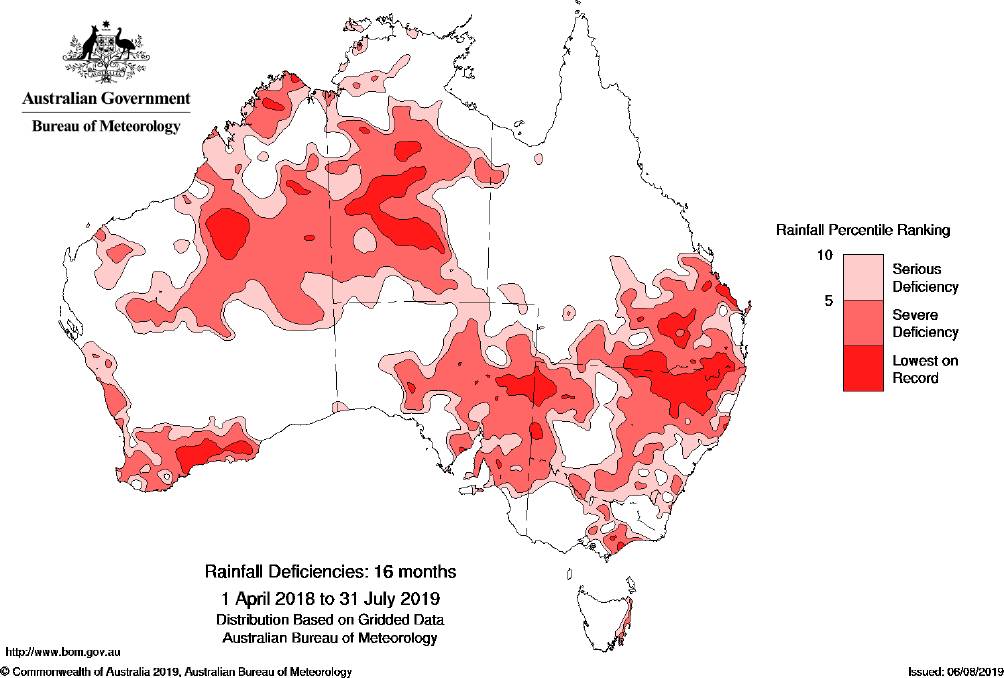 "Unfortunately the outlook looks like warmer and drier than average," he said.

"Most of the eastern half of NSW has seen at least a 300 millimetre deficit and given the severity and longevity of this drought, it would take more than three months to break it."

"In NSW the central and northern ranges have seen more than a 600mm deficit build up, and there are some spots closer to the coast that are 1200mm.

"In the far west some areas are more than 300mm in deficit and the Bureau (of meteorology) rate their rainfall deficiency in the highest decile."

There's a similar story for large parts of Victoria, South Australia and Queensland .

"In Gippsland there is a severe rainfall deficit, as well as in central and eastern SA, and in southern Queensland.

"Southern inland Queensland has severe rainfall deficiencies comparable to the highest on record over the past six months over a 24 month period.

"North and Central Queensland have had some good rain in the past six months from ex-tropical cyclones.

"A lot of the water that fell there flowed towards the south west, but it didn't make it down to the Murray Darling Basin."

"For the current winter crop spring rain is very important," he said.

"The situation is definitely very patchy, and you can't say it's horrible everywhere.

"Much of Victoria looks quite good at the moment. It had good winter rains and the winter crop looks good. The crop is looking good in South Australia and Western Australia as well.

"Southern NSW looks OK in patches, but of course it's very dry in central and northern parts of the state, while much of Queensland is dry as well."

The story Here's how the worst drought on record looks from space first appeared on Farm Online.